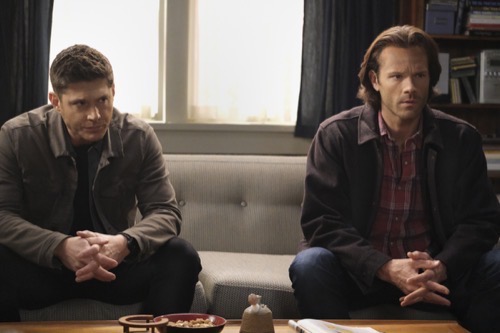 As Jack is about to die, Dean, Sam, and Cas rush to help him. Maybe one of Rowena’s spells will work. Billie shows up just then. She sends Jack to the Empty.

Jack arrives to see Meg. She laughs at him as he struggles. He then explodes. Meanwhile, Billie admits that she sent Jack to the Empty. Chuck and Amara are also now in the Empty. It is vast and able to house them. It is over. Now she wants what they took from her, God’s Book. She will give Jack back for the book. They hand it over. She reveals that the book has a new ending since they ruined the last one.

In the Empty, Meg cannot take how loud Jack has made it. Just then, Jack appears in the bunker. Billie tries to take him and leave. She needs him now. But she is unable to transport with him.

Sam wakes to Dean drinking later that night. They sit and have a drink and discuss what they are going to do now with no heavy hitters on their side.

Charlie is having eggs with her girlfriend Stevie when Stevie just suddenly disappears.

Sam and Dean listen to Charlie tell them what happened. She doesn’t understand what is going on. Jack and Cas wait outside. They talk. Jack feels strange. His plan is over his destiny. He was ready to die. Now he isn’t sure why he is here and what he is going to do. Cas tells him how impressive he is to all of them. Jack admits he is scared without his powers. Cas shares that he is also scared.

Dean and Sam admit to Charlie that Death is trying to send a lot of people back to other worlds.

Charlie doesn’t get it. Is this all just collateral damage? Bobby calls. He shares that he was on a hunt and one of their own just disappeared just like Stevie. This has to be Billie sending many to another world, those who were resurrected, and more. They take off. Sam texts Eileen. He tells her to hold on, he is on his way. When they arrive, Eileen is gone. Sam sucks in his emotions. They come up with a plan. He will get those around him to safety while Dean and Cas go and try to reap a reaper.

Sam and Jack are on the road. Meanwhile, Cas and Dean work on a plan to smoke out Billie. Sam and Jack arrive to meet Donna. She tells them all of the other hunters are on the way; Garth and more. Bobby is inside.

Bobby and Sam talk. He doesn’t have much of a plan, just some specials. While working to protect the bunker, Jack realizes he still has his powers.

Dean and Cas arrive with weapons. Billie hears them coming. They attack her but she fights back. Dean finally gets her in a bad position but she reveals that is Chuck doing all of this. Back at the bunker, more start to disappear. First Charlie, then Booby and Donna.

Billie shows Dean that he nicked her. She will die but before that happens she is going to kill him. She starts to fight back. She chases them back to the bunker. Cas grabs Dean who is injured and brings him down the halls as they try to escape. Cas gets them into a closet. He uses his blood to put a symbol on the door. He hopes she meets her demise soon. Outside, she bangs on the door. Dean shares his regrets. It was Chuck all along and he cannot stop everyone from dying. Dean apologizes.

They are going to die. Cas thinks about a deal he made for Jack so he wouldn’t die. The whole thing led him to think about happiness. It almost made him think about all of them and how Dean is selfless and full of love, not hate. Knowing Dean has changed him and he cared about the whole world because of him. Dean realizes this is goodbye. Cas lets the Empty take him and Billie. Dean watches in shock. He cannot stop it. After, he sits and cries. Sam calls. He cannot answer.