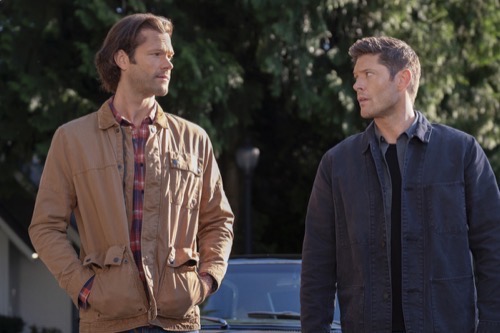 Dean meets with Sam and Jack in an empty street in Minnesota. It looks like everyone is gone. Dean explains that it was all Chuck and how Cas saved him, summoning the Empty. They head into a nearby pub. The place is empty. Jack sits outside, upset, and calling for Cas. Sam blames himself. He thought they could beat this.

Later that night, they meet with Chuck to tell him they will kill one another or whatever as long as he brings back Cas and the rest of the world. Chuck likes this new existence full of misery better. He disappears.

After what seems a few days of despair, Jack tells Sam and Dean how he is sensing something out there, another living thing. They head out to Rt. 66 where Dean finds a dog. He is thrilled. He puts the dog in the car. It disappears. He seems Chuck in a nearby field, smiling. Dean is angry. They head to a church where Jack senses something is. Michael appears in the church. He is in Adam’s body. They fill him in on what his father has been up to. He ignored them before but now he wants to help.

Back at the bunker, they show Michael a book only Death can supposedly open. He tries and is unable to. Dean and Sam sit and talk about how they are screwed. The phone rings. Its Cas. They run to the door to let him in but it’s the Devil. He wants to help. They aren’t too sure. He has brought a token of good faith, a reaper. He makes her the new death before their eyes. She opens the book. The Devil steals out and reveals that his dad let him out of the Empty. He and Michael fight but the Devil is too powerful. He turns to Jack and asks him if he wants to join his winning team. Michael suddenly appears and kills his brother, the Devil. They all stare in awe.

Dean and Michael talk. Dean is glad he is here. It looks like they need to read the Book of the Damned and try and figure out the end. After some time, Sam thinks he knows how to find Chuck with a spell. They head out to trap him. They are successful. When Chuck appears he casts them all aside, facing off with Michael. He kills him and then fights Sam and Dean. He continues to fight them but they keep getting back up, taking more and more, bleeding as he breaks their limbs and punches them. He tells them to say down but they won’t stop as they smile. Jack stands behind Chuck who turns to see him nervously. Chuck snaps his fingers to kill jack but it doesn’t work. Jack is more powerful and takes him down to the ground.

Chuck cannot believe they won. They laugh, telling Chuck all about their plan. They knew Michael wanted to get on his good side so they used him to trap his own father. Chuck is impressed. This is why they are his favorites. He has no idea what happens next. He laughs, honored he will die at their hands. They walk away. They aren’t killers. Chuck is disappointed. They tell him how he is just ordinary and will die like everyone else. They drive off as he pleads.

The boys all head back into town where Jack brings back all of humanity. Suddenly, people are smiling, walking, biking, eating, and more. The boys are all happy. Dean wants to head home but Jack isn’t going home, he shares. They realize he is “him.” Jack reminds them that he will be “everywhere”, in the rain, the wind, and so on, even if he isn’t going to be home with them. He walks away after they say goodbye, disappearing into the distance.

Sam and Dean are back at the bunker enjoying a beer. They are finally free.