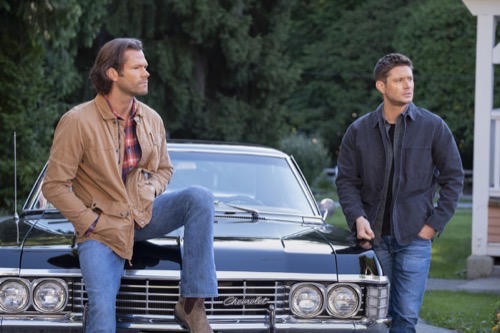 Dean wakes to his dog. Sam enjoys a run. They meet up in the kitchen for eggs and toast. They shower, make their beds, living the normal life. Sam does laundry. Dean cleans his gun. They look for weird happenings. Dean finds something. After a drive, they arrive at the Pie Fest.

Dean is thrilled, he gets emotional. Dean gets a box of pie. They sit. Dean notices Sam is sad. It’s about Cas and Jack. Dean tells him they need to keep living. Sam shoves a pie in his face. He laughs. Meanwhile, a group of armed men in masks break into a family’s home. They kill the father. The kids run. They look for them. The next day, Sam and Dean arrive posing as the FBI. They are updated; the mom had her tongue removed and one body was drained of blood. They see a sketch that looks familiar.

Dean thinks this is the work of evil mimes, maybe vampire mimes. Later, two of the suspects pull up at a house. Sam and Dean take one out and question the other. If he gives them answers, he can die quickly. Otherwise, his death will be painful. He shares that the two boys from the house are with his nest.

Sam and Dean arrive at the location of the nest. Dean wants to use a Chinese star but Sam tells him no. He concedes. They enter a barn. They find the boys. Before they can take off, they come face to face with the other killers. Sam gets knocked out. Dean is overpowered. Out walks a woman who looks familiar. It’s Jenny, they saved her years ago. Dean makes small talk with her. Sam comes to and beheads her.

They fight the others. Dean is impaled on a rod coming out of a beam. He is bleeding and doesn’t want to move. He begs Sam to stay with him when Sam says he is going to get help. After a few seconds, Dean tells Sam to leave with the boys. Sam starts crying. It can’t end this way. Dean tells him how proud he is of him. He has always been stronger. He tells him to keep fighting and he will always be with him. Dean begs for him to tell him it will be okay. Sam stays with him as he dies.

Sam gives Dean a hunter’s farewell with Dean’s dog by his side. In the days that follow, Sam wakes late and alone. He is sad and depressed.

Sam sits alone in the bunker with the dog. He looks in Dean’s room. He sees his empty beer cans, the guns. He cries looking around. He hears a phone buzz. He answers it. They are looking for Agent Bon Jovi. It is a friend of Donna’s in law enforcement looking for help. Sam heads out, alone, to help. He looks down on the bunker from the stair landing.

Dean looks around at the mountains. He sees Bobby sitting in front of the Roadhouse. It looks like he is in heaven. But Bobby is supposed to be in lock-up. Bobby tells Dean that Jack made some changes and busted him out. Heaven is a lot nicer.

Mary and John live down the road. Rufus also lives nearby. They share a cold one while Bobby tells him how Cas helped create the new heaven too. They drink and look over the landscape. Bobby tells him how time up here is different. Dean heads out on a drive listing to Carry On Wayward Son.

The years go by. Sam plays with his kids. One son is named Dean. They throw the ball in the yard. Dean rips it up in heaven on a back road.

Years and years later, Sam gets in the Impala as an old man. Later, he lay dying and his son tells him it is alright to let go. He does, dying peacefully. He meets Dean on a bridge as his younger self. They hug.