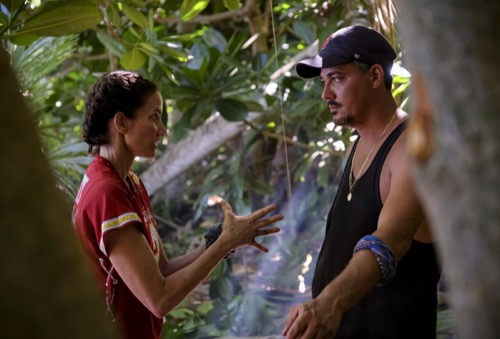 Tonight on CBS Survivor airs with an all-new Wednesday, February 19, 2019, Season 40 Episode 2 and we have your Survivor recap below. On tonight’s Survivor season, 40 episodes 2 called “It’s Like A Survivor Economy,” as per the CBS synopsis, “One castaway is out for blood after realizing their closest ally was sent to the Edge of Extinction. Also, another castaway must dig themselves out after letting information slip.”

The Edge of Extinction is a weird place to be. Amber gave up seeing her children come on this season of “Survivor” and now it feels like its all been for naught because she’s in exile. Her husband meanwhile is still in the game. Rob was walking around when he noticed something and that’s how he found a fire idol. He also wasn’t alone in finding idols. Denise found an immunity idol and she had been with Ben at the time. Ben could have talked her into giving him half of the idol. He didn’t. He advised Denise to find allies and that’s exactly what she did.

Denise sought out allies. She liked Adam and she thought she could trust him. She told him about the idol. He had been excited and then he learned that Ben knew about the idol as well. Ben was a wild card to Adam. Adam wasn’t sure if he trusted him and so he convinced Denise into giving him half of the idol. It turns out it only works if half the idol was given away. Denise had found one and so did Kim. Kim later found a Hidden Immunity Idol and it said that she had to give half of it to someone else. She chose Sophie.

Kim said she trusted Sophie. She thought Sophie would be a good ally and so she informed Sophie that she found the idol. She also gave half of it away. Kim didn’t know that while she considered Sophie a friend – Sophie wasn’t afraid to call herself a snake in the grass. She couldn’t be trusted. She wanted to get rid of Kim because Kim had won by playing the nice girl and so Sophie thought she was only being nice now as a part of a strategy. Sophie was planning on how she could use the idol against Kim and so Kim really did trust the wrong person.

Kim was almost seen with the idol by Tony and Nick. The men were passing the area when they noticed Kim in the bushes and so Kim tried to hide what she was doing. She pretended to be gathering firewood. She had hoped that distracted them because she wanted them to think she was looking for an idol and didn’t find one. Meanwhile, in Extinction, Natalie found an idol. She had a step up over Amber because Amber had never dealt with idols back when she played and so Natalie used that to her advantage.

She got to the idol first. She read it and she found out that she could sell the idol to someone still playing the game. Natalie sent a message because she planned on doing just that. She was playing the game even in extinction and she still wasn’t taking a big of a risk as say, Tony. Tony built a raggedy ladder. The ladder was pieces of bamboo held together by twine and everyone realized this ladder was a death trap. The only one that didn’t see that was Tony. Tony climbed up the ladder and he frightened everyone who witnessed it.

Though, thankfully he wasn’t injured in the process. Tony was able to come back down off the ladder and he offered it up to anyone who wished to use it. Not that anyone took him up on the offer. The contestants pushed the ladder and their own alliances to the background when it came to run a new obstacle course. The winner would receive immunity for their tribe. The contestants all wanted that and so they each threw themselves into the course. They all tried to give the win. They gave it their best and the ultimate winner proved to be the Dakal Tribe.

The losers were the Sele Tribe. Rob blew it for them and he took full responsibility for it. He knew he cost them a win. He also knew he was safe because of the relationships he developed with the others in his tribe. HE thought that someone like Ben would be eliminated. If not him then Jeremy. Both men weren’t a part of the old school that Rob was and there was an alliance in play. There was the old school vs the new school. The older contestants had banded together and they formed an alliance.

This alliance was unfortunately revealed to the wrong person. Danni spoke out of turn and there went the alliance. It wasn’t much of a secret deal if it was out in the open. So, who even knows if the old school alliance is still up and running. The contestants all spent the next few hours running around and trying to create new alliances. One group wanted to rid themselves of someone and another group wanted to eliminate someone else. There was just no cohesion between all of them. The majority couldn’t choose just one person.

The tribal council tonight was tense. There was a lot of paranoia going around and Ben seemed to be the only one willing to mention it. He said the old-schoolers were paranoid and so the young schoolers became paranoid. Ben was making sense and so Rob tried to shoot him down. Rob said it was all about relationships at this point and no idols and so he basically convinced everyone into opening their bags. And there was a search to see who had an idol.

Not that they found out who actually had a piece of it. The idol holders very carefully hid their idol and so their secret didn’t get out. And everyone happily moved on to the important matter.

They all started to vote. They all pretty much came together to vote out Danni and so now she’s the third person to be eliminated from “Survivor” this season.