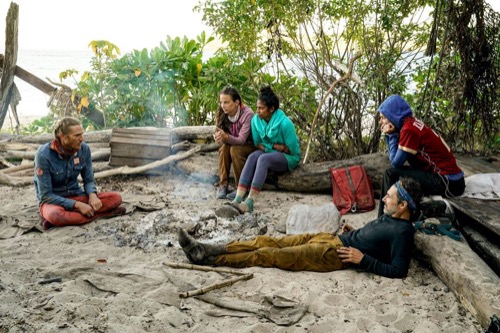 Tonight on CBS Survivor airs with an all-new Wednesday, March 11, 2019, Season 40 Episode 5 and we have your Survivor recap below. On tonight’s Survivor season, 40 episodes 5 called “The Buddy System On Steroids,’ as per the CBS synopsis, “Tribes drop their buffs and switch things up in the game. Also, the tension on one tribe opens up an opportunity for new alliances..”

Today everybody drops their buffs and their switching tribes. Rob doesn’t like this part of the game, last time he lost control of his tribe when they did the tribe swap. Michelle is now stuck on the tribe with her ex-boyfriend, Wendell.

Adam should be happy about this swap, but he is not. At Sele, Nick loves his new tribe, he feels like he won the lottery. Parvati, on the other hand, is desperate to work herself in with her new tribe. Michelle approaches Wendell and tells him that she hopes it is not going to be awkward that they are on the same tribe. Michelle speaks to Parvati about Wendell and tells her that he hurt her in real life and this is not easy. She has to be careful, she was burned once from him and doesn’t want to be burned again. If necessary, she will take him out.

Yara is not the prettiest of beaches, Rob gets to work right away to take control of this new tribe. Sarah did not want to swap, she loved her tribe at Dakal. She has the steal-a-vote advantage, but it is not something she wants to use right away. Sophie and Sarah ask the guys questions and they can feel all the tension. Ben tells them about Adam, how he plays all sides at once. Then he goes on to say how Rob controls everything. Sarah tries to align herself with Adam. At this point, there is probably an idol on this beach and it is vital to the person who finds it. Rob is looking everywhere, this is a tough one. He finds that he underestimated the players, but he won’t do that anymore.

Time for the Immunity Challenge. They are going to race through a series of obstacles, then use sandbags to knock bags off a ledge and in the final part, they have to carry the large blocks and organize them so there are no repeating colors on any side. Dakal is lagging behind, they are dead last and having trouble with the obstacle part of the challenge. Yara is the first team to start stacking the blocks.

Dakal is fighting to stay in this, the other two tribes have caught up. All three tribes are desperate to win or place second, they just don’t want to lose. Sele wins immunity, we are just waiting to see who is coming in second. Dakal wins, Yara is going to tribal council. Rob doesn’t think it is a big deal, he has expendable numbers and just needs to decide who is going home.

Sophie feels her game potentially slip through her fingers. Rob needs to work overtime on his men to get one of the women out, he works on establishing trust with them. In order for this to work, Rob tells them that the three of them have to go back to camp together, stick together and have no conversations with anyone else. Rob is smart! Rob is using his buddy system, they cannot let the girls cause any commotion, and he feels like he is bringing the game back in his direction. Ben and Adam know what Rob is up to, but we don’t see them doing anything against it. Rob is the godfather, and it is showing so far. The women want to blindside Rob, and Adam and Ben may not be leaving camp to speak to them, but they keep giving them a thumbs up or nod to say that they are with them.

Time for Tribal Council. Adam says that nobody is playing themselves out because everyone is very good. Ben says everyone in this game knows not to poke the bear. Sarah says the mood at camp shifted, the guys wouldn’t even speak to her or Sophie all day. She goes on to say that she takes offense to anyone saying there are cracks, there is an opportunity. Rob says that is a good selling point. He was not a tight three from Sele, but the fact is Survivor is a numbers game. Ben says they sat around camp talking, just not a lot of strategies.

Jeff asks Rob what happened, Rob says sometimes less is more. Sophie talks about Rob’s buddy system and if the guys are following they are idiots. Rob says people working together win together. Time to vote. Nobody plays any immunity idols. The first vote is for Sarah, then Rob, Rob, Rob. The sixth person voted out. Rob was blindsided.