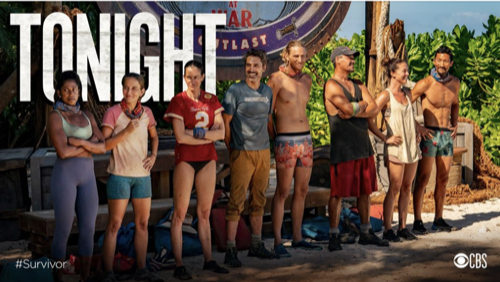 Tonight on CBS Survivor airs with an all-new Wednesday, April 1, 2020, Season 40 Episode 8 and we have your Survivor recap below. On tonight’s Survivor season, 40 episodes 8 called “This Is Where The Battle Begins’ as per the CBS synopsis, “With the old-school players living on Edge of Extinction, it’s merge time for the new-school castaways.”

Edge of Extinction day 19, it’s the day that they have been waiting for, the battle to get back in the game. They each get a scroll and on it there is instructions on how they can use their fire tokens. Amber is giving Boston Rob her fire tokens, so he can have an advantage in the challenge. And if he wins the next challenge, he believes he can win this game.

Time for the challenge, the tribes are on the beach and so are the people who are from the Island of Extinction walk in, missing from the group is Sandra, she raised the sail and brought her Survivor adventure to an end.

Rob says none of the old school players who were on the Island of Extinction are quitters. For their return challenge, they are going to race through a series of obstacles, when they get to the finish they must maneuver a ball to the top of a long windy track. First to finish gets back in the game and a chance at being the sole survivor winning the biggest prize they have ever had, two million dollars. Natalie, Danny, Ethan, Tyson, and Rob earn an advantage, when they get to the dig section they will not have to dig up their string. Amber, Parvati, and Yul have no advantage. Every single second in this challenge could cost them two million dollars. Tyson is in the lead, with Rob just behind him.

Amber and Parvati are digging, Yul is behind but he will have to dig as well. Rob is the first to give it a go. He is there, but can he hook it, yes and he is through to the final stage. Rob only has to make the little white ball move up the track. Rob drops and has to start again, Tyson drops, and so does Natalie. Parvati and Ethan are now through. Everyone is in this for a shot to win, only Amber is behind and still hasn’t got her key. Right now Tyson is in the lead, he is making nice progress, trying to maneuver a curve takes a lot of work. It is between Tyson and Rob, Yul dropped.

Back at camp, Tyson is a little worried that he is the only old school player. If he were these people, he would get rid of him asap. Everyone enjoys a merge feast. Jeremy likes Wendell, they have mutual respect for each other. Jeremy doesn’t mind getting rid of Nick, then he could be Wendell’s number one. Tyson and Ben talk at the water well, Tyson tells him they need to take control because it is going to be big threats against little threats because most of the old school are gone.

At Koru, day 21 and it is raining, and everyone feels miserable. Adam can’t believe how some people are acting, it’s like they haven’t been on Survivor before. Denise took down Queen Sandra, Wendell wants to get rid of her first because she is obviously a big threat.

Time for the first individual Immunity Challenge. Sophie is really cold, she is shaking all over, Jeff says she actually looks like she is convulsing. For today’s challenge, it is a classic one, they are going to hold on to a pole for as long as they can. In addition, they will win a fire token. And, there are two individual immunities, one for the men and one for the women. Michelle is the first one down with a hard fall. Tyson is struggling. Adam is done and out. Sarah drops, she is out, and then Tyson. Wendell is down and so is Tony. Denise, Kim, and Sophie are fighting for the women, Jeremy and Nick are fighting for the men. Kim drops, Denise has won individual immunity for the women plus a fire token. Only the two men are left, Both guys are smiling at each other and trying to see if there is a sign of weakness in the other. Nick drops, Jeremy wins immunity and a fire token.

Jeremy wants to get rid of Nick, but he doesn’t want anyone else to know it is his plan. The rain is still pouring down on day 21 and the consensus is that Nick is on the chopping block. On the other hand, Sophie wants to get rid of Wendell because she is worried that he is getting closer to Jeremy. Jeremy finds out and he is unhappy, Wendell could be another shield for them. Part of the tribe is starting to lean towards Adam, Jeremy thinks he should just vote out Adam so Wendell can stay in the game.

Time for Tribal Council. Jeff asks Tyson if the game is different returning, he says yes, he was loosey goosy before, now he has tightened up. Sophie says he is doing something good, she didn’t hear his name being thrown around today. Denise says this is the defining vote tonight and she is happy she won immunity. Sarah says that this season you are going to get sniped, everyone is holding their cards tight to their chest. Time to vote.