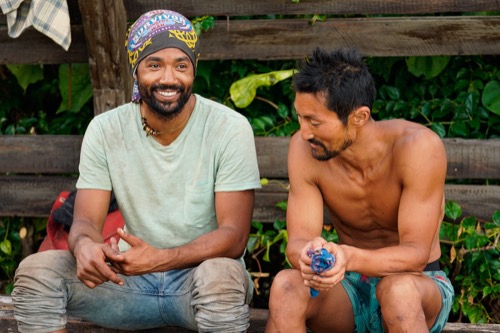 Tonight on CBS Survivor airs with an all-new Wednesday, April 8, 2020, Season 40 Episode 9 and we have your Survivor recap below. On tonight’s Survivor season, 40 episodes 9 called “War Is Not Pretty’ as per the CBS synopsis, “Things get tense for the remaining castaways during a chaotic tribal council. Also, a kind gesture paints a target on someone’s back, and one person will be the last one standing in a taxing immunity challenge.”

Nick doesn’t like the gameplay, he thinks It is getting ruthless and cutthroat. He feels like it is time to take all these people out, he is ready for some revenge. At tribal council, Adam’s heart was beating so fast, he was incredibly nervous, but he is still here. Michelle is feeling incredibly low. Adam’s mind is whirling, he noticed a fleur de Lys at tribal council and he remembers when Denise found her idol, it was a fleur de Lys, so maybe the one at the tribal council is an idol, right in front of them.

Day 22 on the Edge of Extinction. Yul finds a box that reads open when everyone is present. He opens it up and there is a scroll for each person, on it, it says, “as a winner and a fan you step back and assess, sometimes when history repeats it can lead to success.” Everyone is thinking maybe there is something on top of the mountain again, they all get ready and hike up.

Natalie and Rob head in the same direction, Danni and Parvati rethink this whole thing and come to think that this is something from a past season when Aubrey looked up the steps and found where the clue was. Danni and Parvati head back down and the clue is exactly where they thought it would be. This advantage is a 50/50 coin. It allows a player to flip this coin one time at any tribal council. If it lands on safe they have immunity. If it lands on not safe, they are vulnerable. The advantage has no value and they can sell it to a player in the game for any price that they want to.

The rest of the players come down the mountain, Parvati shares with them what the advantage is and she tells them she wants to sell it for four fire tokens, then she will buy peanut butter for the group.

Time for the reward challenge, they will be divided into two teams of five. On Jeff’s go, they will swim out and retrieve a net that is full of wooden fish. They will untie those fish and put them on a pole, get the pole to the finish, and use the fish to solve a puzzle. The reward is Chinese takeout. A random draw is done to choose the teams, there are eleven people, Denise was not picked so she doesn’t get to participate.

Sarah, Kim, Ben, Michele, and Sophie wins the reward. Sarah gives up her reward so Nick could enjoy a meal for his birthday. Adam thinks Sarah did it for gameplay, she did it just to be nice. Tony thinks it was a wrong move, she should not have been emotional. Denise also thinks it is a total game. Jeremy remembers giving away rewards before, and he got voted out.

Time for the Immunity Challenge, once again individual immunity is back up for grabs. For today’s challenge, they are going to balance on a triangular platform with their feet perched on very narrow foot spaces. On Jeff’s go, they will move up on the platform. The last person standing wins. The wind is picking up. The final two are Kim and Ben. Ben drops, Kim wins immunity and a fire token.

Nick’s name is out there tonight and Sophie is responsible. Meanwhile, Sarah’s name is starting to go around as well, even by Nick. Meanwhile, Tyson thinks if Adam has the power to get rid of Sarah, then they should get rid of him. In the end, it looks like Adam may have seen his last days on this tribe, All of a sudden, all hell breaks loose on the tribe. Everyone is thinking someone else is talking about them and names are thrown around again, it is anybody’s guess at this point.

Time for Tribal Council, the members of the jury come in. Tyson says they all ran around in circles today, pulled people to the side, it was crazy. Jeremy says he has never seen the game like this before. Denise says she aged a few years today. All of a sudden, everyone starts to huddle in twos and whisper to each other. Ben and Adam get into an argument, and Adam calls him sensitive.

While they are arguing, the rest are whispering. After all the whispering, Nick says he feels better. Time to vote. Jeff asks if anyone has an immunity idol and Adam gets up and goes over to the fleur de Lys. He tries to take it, but it is glued down and everyone is smirking at him. Jeff tells him that it is not an idol. First vote Sarah, then Adam, Nick, Adam, Nick, Adam, Adam, Adam, Adam. Time for Adam to leave, he bequeaths his token to Denise.