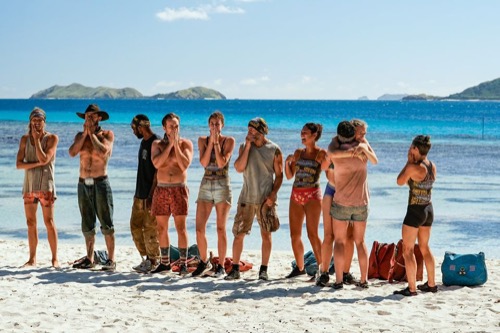 Tonight on CBS Survivor airs with an all-new Wednesday, April 15, 2020, Season 40 Episode 10 and we have your Survivor recap below. On tonight’s Survivor season, 40 episodes 10 called “The Full Circle” as per the CBS synopsis, “Winners at War put the game aside for a heartfelt moment with their loved ones. Also, after a wild tribal council, the 12th person is sent to the Edge of Extinction.”

Day 24, time for the family to visit the Survivors, Kim’s husband and three kids are there. This is Kim’s family, she is so excited to see them in person and not in her mind. Ben’s wife and two kids are also there. Ben says this is the reason why he strives to be a good husband and father. Sophie wants to see her fiancé, and he is there. Sarah’s partner Wyatt is there and her son. Sarah says it doesn’t get any better than this. Denise’s husband Brad is there and her daughter, they do a big family hug. Denise says her daughter might be 15 ½, but she still needs her like day one.

Nick’s fiancé is there, he is so happy to be with the woman he wants to spend the rest of his life with. Tony’s wife and children are there. Michelle’s sister Kim is there. Michelle says she is like a twin with her sister, they are a year and a week apart. Tyson’s family comes out, his daughter is adorable. Tyson says in the four times he has played, he never had a family visit, he is thrilled. Jeremy is last, his wife and three children are there. Jeremy says he missed his family so much, he thinks about them every day and dreams about them. He feels like he was missing so much, and this is the reason why he is there.

Jeff says this is a beautiful Survivor moment, an incredible family bonding experience. Time for the loved one challenge, all the adults and the teenagers are going to swim out to the deepest part of the ocean, to leave all the kids behind to dig in the sand. Actually, there is no Survivor loved one challenge, they are going to do something historic, everybody is going back to camp, everybody is going to experience Survivor together and make memories.

At Edge of Extinction, the players see a boat coming towards them; they think it is something bad. It is not something bad, it is their families. Adam needed his dad to be there to get some sense of closure for his mother’s passing. His father being able to be there made everything ok. Wendell’s father is there and he can’t explain the sheer joy that he felt when he saw his father. Ethan tells his wife that he loves her and he never wants to be away from her ever again. Rob is so happy to have his kids there to see what mom and dad have been doing for over twenty years.

Time for the Immunity Challenge. Today they are going to pull on a rope balancing a wobbly table while they attempt to stack letter blocks one at a time. The first person to spell immunity wins immunity and two fire tokens.

Tony has a plan to blindside Jeremy, there is something fishy about him, he would even vote Sarah out if he could. Tony starts to work on his plan. Kim is not a part of the plan so she is working on a new one with Tyson and Jeremy, she tells them she is going to play as hard as she can until the end. She tells them she has an idol, and she wants to vote out Sophie. Jeremy tells Tyson he has an advantage, he can leave Tribal Council, he can’t vote, but he can’t be voted out either. If he leaves, he is turning his back on his alliance. Sarah has the steal a vote, it would be best if she used it tonight.

At Tribal Council the whispers start again, Tony is so happy that he has an immunity idol necklace on him. Jeff asks Kim what triggers that, she says it is because you never know what is going on until the votes are down on paper. Jeremy says this is their season on steroids, its madness. Time to vote, Jeremy and Sarah say Jeff’s name, she won’t go first, they are both giving each other looks. Jeremy goes first, he gives Jeff an advantage where he can leave Tribal Council, he will leave and he cannot vote. This is safety without power. Jeremy leaves. The whispering starts all over again and the tribe separates into two groups. Then Sarah produces her steal-a-vote, she takes Denise’s vote. Now Kim plays a hidden immunity idol for Denise, any votes for her won’t count.

Tyson is the twelfth person voted out, he doesn’t give any fire tokens, instead, he gives the finger and walks off.