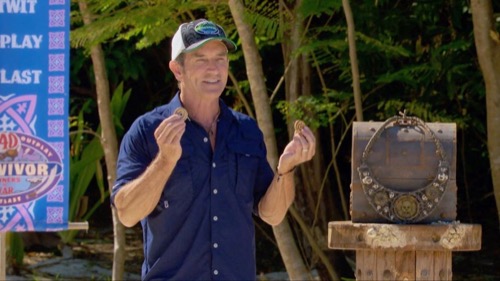 Tonight on CBS Survivor airs with an all-new Wednesday, April 22, 2020, Season 40 Episode 11 and we have your Survivor recap below. On tonight’s Survivor season, 40 episodes 11 called “This Is Extortion” as per the CBS synopsis, “One castaway plays double agent and goes undercover to infiltrate a group they want to vote out. Also, one player who has been playing it cool finally goes to work to search for an idol.”

At tribal Jeremy knew everyone was lying. He loved that he was able to use his advantage to save himself and is surprised to find out that Tyson is gone to the Edge of Extinction. Nobody wants to tell him what happened. Ben had a clear cut plan going into tribal of getting rid of Jeremy, and then they had to go to plan B, and that didn’t work. Jeremy asks Ben if he thinks his game is better without Tyson. Ben tells him all that matters is that he is a bigger threat than he is. Michelle’s mindset right now is that she doesn’t trust anyone anymore.

Tony has stayed in camp all the time because he didn’t want to jeopardize his game in being seen looking for idols. Now is his time, everyone is exhausted after Tribal Council, so he is gone out in the dark to look for an immunity idol. Then while he is looking, Nick arrives and cramps his style. He already looked at the water well, so he tells Nick to go look there to get rid of him. Tony continues his search, and what does he find an immunity idol. Tony kisses the idol a few times, he is so happy.

Sarah thinks people see her as smart and funny, but she is creative and started her own clothing line on the island. Tony says his pants would sell far faster than the skirt she made, which annoys Sarah. Sarah organizes a fashion show for everyone. Tony is not interested, he just wants to play the game.

Tyson is on the Edge of Extinction. Natalie and Parvati are walking around and Natalie finds an empty wine bottle with a message in it, “the goal was so clear, be crowned best of the best – but with my fire fame it’s now a difficult test – yet I’ll crawl if I must, there’s no way will I rest – for to lie down now, would be the end of my quest.” They both decide not to tell anyone about it.

Parvati figures out that the clue is under the bed where everyone rests, and they stay on it, all day long. This is going to be a tough one. When the sun is going down everyone goes to watch it near the water, and it’s Natalie’s time to look. She finds an advantage, “this is an Extortion Advantage, this gives you the advantage to block one player from participating in the next immunity challenge and from voting at the next Tribal Council unless they meet your payment demands – you can attempt to extort as many fire tokens as you think they can pay.”

Tony finds a scroll in his bag, he is excited but doesn’t understand that he is the one that is being extorted. The demand is six fire tokens, Tony says in real life, this is prison time. He only has three tokens, how is he going to pay this.

Tree Mail, “crazy how losing a little challenge can destroy your game as a whole, this next one is especially precarious – I wouldn’t touch it with a ten-foot pole.” The pressure is on for Tony, he plans on speaking to his fake alliance. Michelle has zero fire tokens, she can’t lone any to him. Michelle offers to speak to Jeremy about it. Jeremy laughs, he can’t believe this. But, he is willing to give Tony one fire token. Next, Tony goes to his real alliance, Nick gives him one. Ben says yes as well, he has the six to pay the price for the extortion.

Time for the Immunity Challenge. Today they are going to stand on a narrow beam while balancing a statue at the end of a long pole. At regular intervals they will move farther away from the statue, making It more difficult to balance. If at any point their statue drops or they fall off, they are out. The last person left standing wins immunity and two fire tokens. Tony wins individual immunity and two fire tokens, he dominated this competition.

Back at camp, Tony is totaling playing Jeremy, and everyone else is on board to vote out Jeremy, but write Michelle’s name as well just in case Jeremy plays an immunity idol. Jeremy knows they are coming after him, the only thing he can do is go after Ben. Kim and Denise try to convince Jeremy that they are going to vote out Ben as well, but he is being blindsided. In the meantime, Ben is bugging Jeremy and he couldn’t be happier that Ben is the intended target.

At Tribal Council, Jeff says this game gets you no matter where you are. Jeremy says if you want to make a big move, you got to do it at the right time. He had to play his advantage last Tribal because he would have left instead of Tyson. Ben says it was quiet around him today and he found it uneasy. Time to vote. No immunity idols are played. The first vote is for Jeremy, then Michelle, Jeremy, Michelle, Jeremy, Sophie, Sophie, Sophie and Sophie. Sophie says she has an idol in her pocket, she doesn’t know how this happened. She tells the tribe a good job, she didn’t see this coming. She gives her tokens to Sarah and Kim.