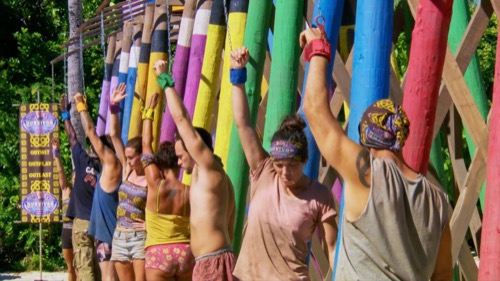 Tonight on CBS Survivor airs with an all-new Wednesday, April 22, 2020, Season 40 Episode 12 and we have your Survivor recap below. On tonight’s Survivor season, 40 episodes 12 called “Friendly Fire” as per the CBS synopsis, “Alliances have a chance to crumble after a tribal blindside. An undercover operation escalates to great heights.”

Koru, night 48: Ben tried to make a move on Jeremy at Tribal Council and it didn’t work, now he is not even speaking to Jeremy. Sarah is angry, she calls Tony’s move grimy and says her game is sunk. She takes Tony to the side and loses it on him while others are listening in. She is infuriated with him, she thinks they no longer have the numbers. She tells him that if she gets voted out she will not speak to him ever again. Tony thinks this is war and Sarah needs to put her man panties on.

Koru, day 49: Tony climbs a tree, another undercover operation; it’s his spy nest. Sarah knows about his spying. Sarah is worried that if Tony doesn’t back off, he is going to get himself voted out. Jeremy asks Ben if they can talk and he says no. Kim understands how Ben feels, and even though she would like to get rid of Jeremy, she wants to get rid of Tony. This is by far the riskiest move Kim is going to make, but she has to do it. She goes around camp and gets others to agree with her. This game is about power, and it is time to take out Tony.

At Edge of Extinction, Rob has a board in his hands and walks up to everyone else. On the board, it reads, “today you each have a chance to earn fire tokens, but it will require tremendous effort – along the backside of the island, there is a giant pile of coconuts – they must retrieve twenty coconuts and stack them near their shelter, one coconut at a time – the first six to complete the task will receive two tokens each and the task has to be completed by sundown.” Tyson is having a hard time, he can’t believe how grueling it is and the women are just passing him left and right. The tide is starting to come in which is making this task even harder. Rob slipped and fell, cracked his elbow. He tries to shake it off, but he knows he is done. Two hours into the competition, Sophie and Natalie are just leaving each other behind in this competition. Natalie comes in first, Sophie second, then Yul, Tyson, Parvati, and Wendell. Rob didn’t win, but he did finish the competition. Amber had a hard time watching him continue, he is not a quitter.

Koru, day 49; Jeremy tries to get Ben to talk to him, but he still won’t. Tony and Sarah are arguing, Nick watches and finds it is his time to maybe make a move. Nick has his eye on the prize and thinks this is the time to stand out. Sarah tells Tony that Sophie’s idol is going to be put back in play, and he better find out because if she gets voted out she is not going to be happy. Denise has already been looking, and she is not the only one.

Ben is talking to Tony when he finds the idol. Ben got caught red-handed, he tried to hide from Tony because he barely trusts him. Ben knows Tony has an idol and wants him to feel comfortable so he doesn’t use his idol.

Time for the Immunity Challenge: today they are going to stand on a very narrow perch with their hand above them tethered to a bucket. When their hand drops they are out of the challenge. The last woman or man who is left standing will win immunity and two fire tokens.

Jeremy drops first, then Ben. Sarah drops. For the men, Nick and Tony are left, Nick tries to make a deal but Tony turns him down and says he is going to try to go for three in a row. Jeff is now going to tempt people to come down with food; peanut butter, chocolate, cookies, and milk. Kim opts to jump out, so does Michelle and Nick.

Tony and Denise win immunity. Tony is thrilled, three immunities in a row.

Kim is so mad that Tony won three immunities in a row and he has a lot of fire tokens. The rest of the tribe is scrambling to think about what to do, they can no longer get rid of Tony. Nick tells Tony that Kim was trying to get him out. Now he is 100% worried about her, he can’t let Jeremy be sent home – then the women will have too much power.

Tim for Tribal Council. Denise says after the lost tribal council it was mass chaos. Tony is whispering to Jeremy, then to Ben. Then Kim gets up and whispers in Jeremy’s ear. The whispering continues and Jeff just stops talking to them. Ben goes to Sarah and tells her that Tony thinks they are going after her. Jeremy wants to talk to Denise and she says she is done, she wants to vote. Time to vote. The first vote is for Jeremy, then Kim, Jeremy, Jeremy, Kim, Kim, Kim, Kim. Another blindside, Kim is voted out. Tony has turned into a boss. Kim gives one token each to Michelle, Denise, and Sarah.