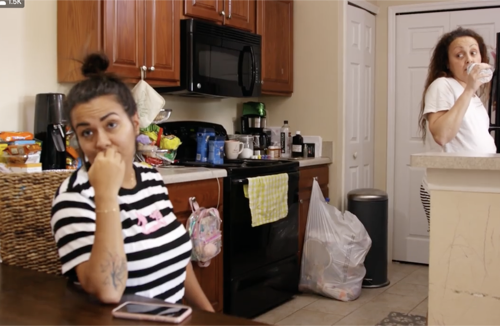 Tonight on MTV Teen Mom 2 returns with an all-new Tuesday, September 8, 2020, episode and we have your Teen Mom 2 recap below. On tonight’s Teen Mom 2 Season 10 episode 2, “About Last Night,” as per the MTV synopsis, “Briana returns after a night with Luis. Isaac makes a confession to Kailyn, prompting her to reconsider her custody agreement with Jo. Jade is forced to juggle single-parenthood while preparing for her beauty license exam.”

Kailyn spoke to Chris. Chris and Kailyn were in a relationship up until fairly recently and that’s why rumors of him impregnating another woman had hurt her. She wanted to know if Chris had treated her when they were together. Chris told her that the rumors weren’t true and that he didn’t get another woman pregnant, but then again a strange woman did text Kailyn out of the blue. This woman claimed she was pregnant by Chris. She told Kailyn that she got her phone number by going through Chris’s phone and she also said that she was contacting Kailyn because their children were going to be siblings. And she wanted their children to know each other.

With this woman texting her that she’s pregnant, Kailyn wasn’t sure what to believe. She wanted to believe Chris when he denied the rumors and at the same time that doesn’t explain why a complete stranger would go out of her way to contact her. Kailyn also didn’t have time for this crap. She was raising three children and trying to juggle all of their schedules as well as their visitations with their dads. The son she shares with Chris had gone to visit Chris’s family and so Kailyn then had to drop off her older children with their respective fathers. Kailyn has three kids by three different dads. She really didn’t have time for Chris to be playing games like this.

Kailyn’s son Isaac hadn’t wanted to go over to his father’s house. Kailyn shares custody of him with her ex-boyfriend Jo and Jo doesn’t have as much money as Kailyn. He has to work more hours than she does. He also doesn’t usually have the time to spend with Isaac that Isaac wants. Isaac complained to his mother that he didn’t want to go over there because his father works all the time and he doesn’t get to see him as much. Isaac was so upset that he wanted to stay with Kailyn. Kailyn tried to diffuse the situation. She reminded Isaac how blessed he is to have two parents who both want to be a part of his life and so she calmed down her son with that. And she later spoke to a friend about documenting how unhappy Isaac is in case it becomes an issue with custody.

Leah was still trying to put out the fire that started at the reunion show. Her ex-husband Jeremy had thrown shade at her other ex and he more or less accused Corey of not being there for his daughter Ali. Ali was born with a condition. She’s had to have frequent doctor visits and it was actually part of their routine for Leah to be the one to go to these doctors’ visits with her daughter. Corey started off by needing to work during these visits. Then it just became a thing for Leah to go and Corey not to. Leah didn’t think there was an issue with it. She didn’t know why Jeremy brought it up like he did because Corey was not there to defend himself.

Corey was upset when he found out what Jeremy. He was still upset weeks later and so it was hard for Leah to bring up Ali’s appointment. Ali told her mother that she wished her dad could come with her to the doctor. She doesn’t mind her mother being there. She just wants her father there as well and so it was up to Leah to bring it up to Corey. Leah tried to begin the conversation with him by apologizing again for the reunion. Only Corey kicked off again with how upset he is. He was made to feel like he wasn’t a good father to his daughter because he didn’t go to enough of her appointments and at first Leah had no idea to tell him that technically it’s true. He should be there more.

Leah eventually got around to it. She told Corey that Ali wanted him there and so he agreed to go with them to the doctor. This was the first appointment he’s made in years. He really hasn’t been there to support his daughter as much as he should and so maybe that’s why he’s so upset. He’s upset because he knows Jeremy was right to call him out for not supporting his child as much as he should. Corey went to the appointment with Leah and Ali. He got to hear that Ali’s strength is still quite good and that Ali was doing better. Ali was by her father’s side throughout the whole appointment. She was so happy he was there that his presence was a positive change for her.

Chelsea’s daughter Aubree is growing up. Her daughter usually spends time at her grandparents’ house and so it was a new thing when Aubree said she didn’t want to go. She’s never said that before. She had always seemed fine with going over there and Chelsea asked her daughter about it. Aubree wasn’t upset. She didn’t have an issue with her grandparents. She just didn’t want to go over there and so Chelsea didn’t force her. Chelsea texted grandma and she said Aubree wasn’t coming over. She received a text back asking why and if Aubree was mad at them or something and Chelsea said no. Her daughter just didn’t want to leave home that day.

Aubree wasn’t a little kid anymore. She was old enough to voice what she wants and what she doesn’t want. She wanted to stay home. It could be for any number of reasons and only Aubree would know the truth. She wasn’t telling her mother. She wasn’t going to be telling her grandmother either. Aubree wad old enough to decide for herself. Kailyn thought her son was old enough to decide if he wanted to spend extra days with her or with his dad and she tried talking to her ex Jo about it. And he shut her down. He said Isaac was too young to decide that and so he didn’t want to hear any of Kailyn’s suggestions.

Brianna’s two children were also growing up. They were growing up and their fathers needed to be more in the picture. Brianna’s youngest daughter Stella rarely sees her father. Her father is Luis and Brianna had tried to confront him at his place of work. He was a DJ. She went to the club he was playing in and she told him that he needed to see his daughter more. Brianna went to the club upset, but then she practically forgot all about it the second Luis began flirting with her. They both had had a few drinks and Brianna went home with him. They went on to have sex. They didn’t use protection and so it’s a good thing Brianna is on birth control.

Brianna wasn’t on the birth control the last time they decided to forgo condoms. Its why she got pregnant the second time even as she had promised herself to do better after her first unplanned pregnancy. Brianna does not plan these things at all. She just goes where the mood takes her and she ended up back in bed with Luis. They apparently later talked after they had sex. She brought up Stella again and he had promised her while naked and crying that he would do better. Luis did contact her after the night they spent together. He seemingly contacted her about visiting Stella and Brianna was a little too happy about it.

Brianna had been caught on her walk of shame by her family. They asked her about what happened and she told them that she slept with Luis. She also told them that they didn’t use protection. Which is a big no-no. Brianna then had to promise her family that she would be taking an STD test. She doesn’t really trust Luis because he’s been seeing other women and they weren’t together. Her family also asked her if she was catching feelings. She said she wasn’t and she later lights up when he texted her. Brianna was still interested in Luis and she met with him again without their daughter being there.

Jade became a cosmetologist. She’s been working towards this for a while and its been hard as a single parent to her daughter Kloie. Jade had needed help. She turns to Sean who wanted to work his way back into the house and she told him that he could come back. The two of them have this cycle they play out. He would leave and then he would come back. Jade would often take him back because she does want to have that family and so they both needed to figure out a healthier way to go forward with this relationship.