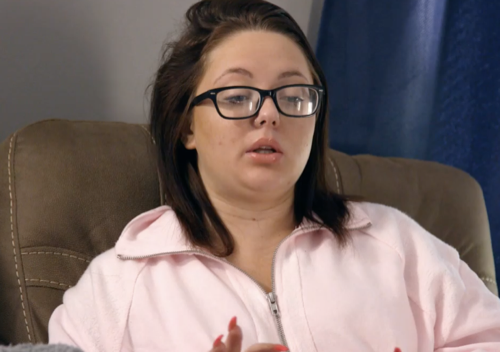 Tonight on MTV Teen Mom 2 returns with an all-new Tuesday, October 6, 2020, episode and we have your Teen Mom 2 recap below. On tonight’s Teen Mom 2 Season 10 episode 6, “Where Have You Been?,” as per the MTV synopsis, “An explosive family brawl leaves Jade caught between Sean and her parents. DeVoin’s family reappears in Briana and Nova’s lives after being absent for years. Kailyn tries to connect with her sister.”

Leah co-parents with two different fathers. Sometimes they make it easy and sometimes they give her trouble. Leah was hoping Jeremy wouldn’t give her trouble over their daughter’s birthday. Leah’s youngest daughter is turning seven. Addie was a big girl now. She wanted a birthday party to match her personality and so she was getting a Paris-themed birthday party. Addie’s birthday was also going to be a place called Kidaroos. It was like an inside theme park and Addie and her guests get to play several games there because while Addie may think she’s a teenager she’s still a kid. And she’s going to want to goof off with her friends.

Leah planned the birthday party. She then called Jeremy and she asked him if he wanted to split responsibilities for the party. He said “yes”. He wanted to do his part in supporting his daughter and he also heard from Leah that Addie seemed especially excited for this birthday. She was treating it like it was a big number. Addie was just turning seven and she was so happy about it that it felt like she was turning sixteen. Addie’s sisters even teased her about it. They all claimed Addie was a teenager already and they were ready to party. Leah was doing her best to make sure everyone was happy and Briana meanwhile was still struggling to co-parent with her ex Devoin.

Devoin hasn’t always been there for his daughter Nova. He was doing his best to step up now and to be a consistent presence. Only Devoin’s also now wants to be a part of Nova’s life as well. His mother wants to get to know Nova and so Devoin introduced her to his daughter. He didn’t get any clearance from Briana. He basically just did it on his own and thankfully Nova wasn’t upset by it. She was okay with meeting her grandmother. She only told her mother about it because Briana asked her how her day went and she explained she met her grandmother for the first time. It technically wasn’t the first time. She met her grandmother as a baby and then the grandmother just dropped her out of her life.

Briana didn’t want that to happen again. She wanted to protect her daughter against someone she couldn’t depend on and so she said she was going to talk to Devoin. However, if the grandmother wants to be a part of the child’s life now then maybe it wasn’t such a bad idea. Kailyn’s mother contacted her out of the blue the other day. It was the first time she had heard from her mother in three years and so Kailyn wasn’t going to automatically re-introduce her mother to her kids. She didn’t want them to get excited about meeting their grandmother when odds are the grandmother is going to dropping back out of their lives very soon.

This wasn’t the first time Kailyn has done this with her mother. Back when she was sixteen and pregnant, she had to live with her boyfriend’s family because her own mother didn’t really care about her or her child. Kailyn has been hoping her mother would stop being so unreliable. She keeps giving her mom chances and the only difference now she doesn’t bring her mom back into their lives until she’s sure her mom won’t hurt her kids. Emotional hurt is just as painful as a physical one. The kids needed to be protected and it was for them that Kailyn was taking it slow with everyone she was bringing into their lives.

Kailyn has also been in contact with her half-sister. Her sister had a baby and so Kailyn was going to meet the baby with her boys. She wanted her kids to know their cousin. They should know their first cousin even if there was some confusion with the kids on what first cousins actually meant. They thought the other cousins that they met first were first cousins and that this new cousin was their second cousin. So, Kailyn had to explain the difference. She couldn’t help laughing at the end because it was so funny and her kids look so much like their dads that she felt as if she was talking to her exes.

Then there was Jade. Jade’s parents moved in with her and Sean and she had to call the police the other day because they got into a bust-up. Jade ended up kicking everyone out because she just wanted peace. Jade had all these plans on what her life would be and none of it involved family drama. She just started her own business. She rented a studio and she’s doing hair out of it. She also has her daughter to worry about. Jade didn’t want to deal with any more drama and so it was a relief when she didn’t hear from either her parents or Sean. She felt she finally found a moment of peace. And she was in no rush to get embroiled in another argument.

Only Jade didn’t know what Sean did. Sean brought drugs into the house and after his catch was found he tried planting drug pipes on Jade’s parents. Sean didn’t know that they set up a camera in their room. The camera caught him planting the pipes in their room and he got into a fight with Jade’s dad because of it. Jade just knew about the fight. She didn’t know about everything else because her parents hadn’t wanted to bother her with it and they were giving her space so she wouldn’t have to deal with them as well as with Sean. And Sean was keeping away for his own reasons.

Sean probably knew he was caught. Its why he hasn’t gone around to Jade’s or moved back in and so he was staying away. Briana hoped Devoin’s mother would also stay away. It turns out the drama between the two women went way back. It went back to Briana not putting Devoin on Nova’s birth certificate or giving Nova his name and so his mother had called her horrible names at the time. His mother had attacked Briana when Briana was just a kid herself. Briana never got over what Devoin’s mother did and she was hesitant to have the woman around her even now. She thought she deserved an apology.

Briana allowed Devoin to invite his family to Nova’s birthday party and they all showed up, but there was no apology. There was also no apology for Kailyn when her sister backed out of meeting up with her because she claimed a dog bit her and she was still healing. And so that’s the last time Kailyn was going to give her sister a chance.

And Addie’s birthday party went well. She had fun and she got a bunch of presents. Addie was now old enough to play with slime.

Aubree was now old enough to have her own cell phone.