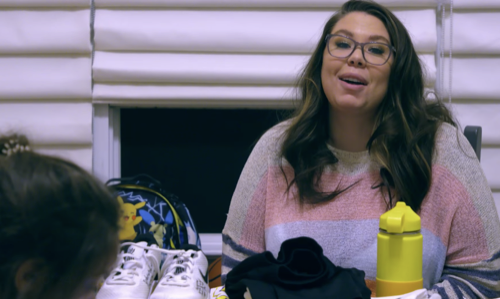 Tonight on MTV Teen Mom 2 returns with an all-new Tuesday, October 27, 2020, episode and we have your Teen Mom 2 recap below. On tonight’s Teen Mom 2 Season 10 episode 9, “Piece of Me,” as per the MTV synopsis, “Kail celebrates Isaac’s birthday while life-changing news weighs on her. Leah reveals secrets about her past. Briana gives Devoin an opportunity to step up. Chelsea tries to change Aubree’s visitation agreement with Adam’s parents.”

Briana is getting her hair done by a friend. They talk about Briana’s daughter Nova and their struggles with her dad’s family. Later, Briana asks Devoin for help so she can run errands. She has a hard time trying to get things done. He agrees.

Chelsea picks her daughter up and learns her ex Adam didn’t go to their daughter’s school for lunch because he overslept. Chelsea cannot believe it. Lunch is at 11 a.m. After, Chelsea meets with a friend to talk and vent about her custody questions with Adam. She doesn’t want to push her daughter into seeing her dad and also wonders what kind of effort he is making.

Leah is still watching her daughter who has muscular dystrophy. She dances with her sister. She wants to make sure she is okay after having trouble with her foot. Leah talks with her editor as she is writing an autobiography. She has so much to share, including discussing her drug problems. She wants to help others own their own life stories.

Jade’s mom has moved out and Sean has moved back in. He has been drug tested several times and has passed. Jade wants to destress and getaway. She and the girls are talking about taking a trip. She hopes Sean will remain sober.

Kailyn is with her boys when one of her kids asks why he doesn’t have a stepdad. She doesn’t know why to answer that. Her oldest Issac tries to explain. She now sees that he has witnessed a lot. She realizes looking back that she had a number of toxic relationships and let too many people stick around after she saw all of the red flags.

Chelsea talks with her husband while on her way to the lawyer. She comes up with somethings she wants to discuss in regard to their custody agreement. Meanwhile, Devoin is late to pick up his daughter at Briana’s. When he does arrive, Nova is upset. She doesn’t want to talk to him. Nova then asks that they all go with her. After spending some time at the salon altogether, Devoin says he has to go to work.

Jade and her friends arrive in Vegas. They head out to eat and talk about all of the latest drama with her parents and Sean. Meanwhile, Leah has given Jeremy a few chapters of the book she is writing since she is in it. Jeremy cannot believe she is sharing so much in her life.

Kailyn takes the kids out to celebrate her so Issac’s 10th birthday. Kailyn reflects back at giving birth to him and how much they have grown since then.

Chelsea tells her friend about a meeting with her lawyer. They plan to send a letter to change their agreement. The lunches are not a problem so those will stay the same. But the main concern is stopping any small issues from getting too big and making sure her daughter feels comfortable. At home, she tells her husband about everything.

Leah visits with her sister to tell her about the book she is writing and how Jeremy thinks she is sharing too much. Meanwhile, Briana talks with her mother about how hard things are for her raising Nova alone. She is tired and angry but for today she isn’t going to explode.

Jade calls to check in on Sean and their daughter. They are doing well. Jade heads into a haunted house with her girlfriends after eating in the car. She is happy she can take some time to herself.

Kailyn shares that she is pregnant with Chris with her fourth child. She hasn’t talked with him. His aunt leaked the information. She plans to do this alone though. She is scared.