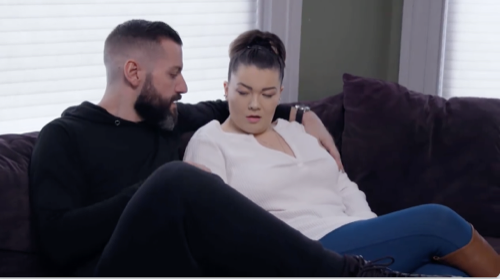 Tonight on MTV Teen Mom OG returns with an all-new Tuesday, June 2, 2020, episode and we have your Teen Mom recap below. On tonight’s Teen Mom Season 8 episode 24 as per the MTV synopsis, “Cheyenne confronts Cory about his priorities shifting away from Ryder when he has his daughter with Taylor. Amber says goodbye to Dimitri while Maci makes a difficult decision on whether to extend the Order of Protection on Ryan or not.

Mackenzie plans a special day to celebrate her late mother’s birthday while Catelynn and Tyler meet with a gender selection doctor to ensure their next baby is a boy.”

Dmitri’s visa is up. He has to go back to Belgium and he has to say goodbye to Amber. Amber was glad she was able to introduce him to her brother during his visit. Her brother is a big part of her life and she had wanted his approval on her new relationship. She had also liked getting to know Dmitri in person. Things were different from them once they met and they both wanted to continue the relationship after he returns home. The couple was already planning further trips. They were very much together and even their friends and loved ones are assuming these two might one day get married.

Cheyenne wasn’t seeing anyone. Her last relationship ended after she looked for commitment and she couldn’t find it with him. She’s now single. She’s a single mom and that wasn’t what she envisioned for herself. Cheyenne had wanted to have a family. She wanted to be in a relationship and to have kids and she didn’t get that while her ex Cory did. Cory was with his girlfriend Taylor. They were also about to have a baby and so Cheyenne was worried about Ryder. Ryder is used to having all of Cory and Taylor’s attention. She’s been an only child so far and it’s going to be new for her with having a sibling.

Cheyenne had talked it over with Cory. He traveled with her and Ryder to D.C. for Rare Disease Day. Cheyenne and Ryder had been asked by a charity to come out and talk about Ryder’s condition. Ryder has a condition called VLCAD. They found out about it when Ryder was two days old and at the time it had been scary. Its less so now because they can see Ryder. They can ask her how she’s feeling and she seems to be doing well. Ryder was a typical toddler. She loved playing with her toys and she had scheduled naps. Ryder living her best life is what both of her parents want for her and that’s why Cheyenne had her talk with Cory.

Cheyenne was protecting her daughter. Catelynn and Tyler were thinking about adding to their family and what they wanted most was a boy. Their first child was a girl. She was adopted and then they went on to have two more kids together. Again, they had girls and so they want a boy next time. The couple had looked into a gender selection doctor. There were doctors now that could ensure their next child is a boy and the couple wanted to meet them because they said their next child will be their last child. They don’t want more than three. Three is their limit and this next baby is their last chance at finally having a boy.

Catelynn is worried about what she might have to go through mentally and physically. She later asked the doctor about the specifics. He told her that she was going to have to take injectables and that it would increase her hormones. The doctor would eventually retrieve her eggs. He would the eggs with Tyler’s sperm and they would perform microsurgery on the embryos. The embryos could turn out to be all female and if so the doctor asked what would they liked to during their possibility. Catelynn made a joke about knowing their luck they might just have to deal with such a scenario. The doctor also told them that it would be twenty to twenty-four thousand dollars.

It’s a lot of money. It’s a lot for something they aren’t sure will work and so the couple will be taking a risk if they decide to go through with it. Catelynn and Tyler were considering having another child while Mackenzie wasn’t even sure if she could turn to her husband when she needed him the most. Mackenzie has been struggling since her mother died. Her mom was her rock and she’s been feeling adrift without her. Mackenzie fell into a depression. She started showing up late at her children’s school and she got in trouble with that. She also felt like she couldn’t reach out to her siblings or her dad because they were in pain too. And so she would have liked to have been able to talk to her husband.

Only Josh wasn’t the most open person. He walks away when the conversation gets too tough for him and Mackenzie takes every time he does that as a personal rejection. She feels like he doesn’t want to be open with her. She then shuts down after the supposed rejection and her marriage has taken a hit. It’s now worse than when he cheated on her. Josh is emotionally distancing himself from his wife and she doesn’t know what to do about it. She tries to talk it over with her sister. Her sister is just a little dismissive of it because she swears Josh is there for Mackenzie and so she doesn’t exactly what it is that Mackenzie is facing. Mackenzie could talk about it all she likes, but it makes no difference if her sister is not seeing her side of the conversation.

Mackenzie was dealing with their mother’s first birthday with her gone. Her mom loved to run and so Mackenzie was going to run for fifty-one minutes in honor of her mother’s fifty-first birthday. She later did it. She also went out with her family afterward and it was a nice way to celebrate her mom. Mackenzie got to heal during a moment like this. Unfortunately, not everyone chooses to celebrate the good. Some like Ryan and his wife were already worrying about the bad. They knew the expiration date restraining order was coming up and they were worried because they thought Maci might ask for an extension.

Maci was actually thinking about what was best for Bentley. Bentley got into the private school he wanted and Maci wanted to throw a celebration to honor it. She even wanted to ask Ryan and his family to come. She thought Bentley would like it to have everyone in his family show up and it was only the restraining order that was preventing it.

Cory and Taylor later had their daughter and Ryder enjoyed becoming a big sister.

Catelynn told Tyler she didn’t want to spend twenty grand on having a baby. She wanted to do things naturally and take their chances with that.

Dmitri was denied re-entry to the States because of an immigration issue.

And the coronavirus broke out.