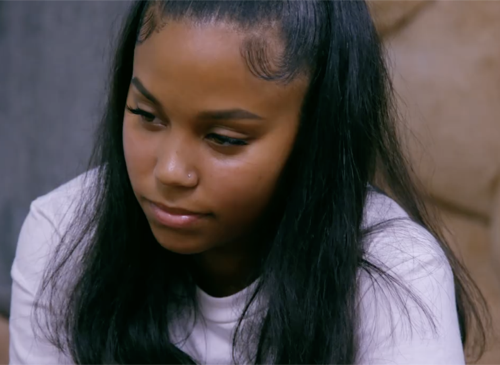 Tonight on MTV Teen Mom OG returns with an all-new Tuesday, May 5, 2020, episode and we have your Teen Mom recap below. On tonight’s Teen Mom Season 8 episode 20 as per the MTV synopsis, “Amber’s new boyfriend from Belgium comes to visit. Maci contemplates sending Bentley to a private middle school.

Cheyenne enrolls Ryder in a preschool prep class while Cory is away competing on The Challenge. Catelynn and Tyler catch Ashley in a lie and worry she might be slipping back into old habits while Mackenzie struggles with the loss of her mom and yearns for Josh’s support.”

Dmitri flew in. He flew in from Belgium. He met Amber online and they got to know each other. They talked. They both shared certain interests and there was an attraction. Dmitri was a hot guy. Amber was definitely interested in him and she hasn’t been with anyone in a while. Her last relationship was with James’s father. Amber had sort of jumped into that relationship too fast and she got pregnant too fast. She hadn’t taken the proper precautions at the time. Her friends and family wanted her to be smarter with Dmitri and so they made sure she had condoms. Amber received some of the Gary Times condoms from Gary and his wife.

Gary later made sure to hand over those condoms the moment Dmitri got into the car. Gary had gone with Amber to meet Dmitri. Dmitri had still been a stranger at the time and so Amber had asked Gary to go with her to be safe. She wasn’t sure of the situation she was walking into. She may have enjoyed a mild flirtation with Dmitri online, but she could have been wrong about him and so Gary went along to protect her and to meet Dmitri himself. The meeting itself went great. They got to laugh about the condoms and right away Amber was cozying up to Dmitri. And he was doing the same with her.

Mackenzie was, unfortunately, dealing with the loss of her mother. Her mother had cancer and cancer spread faster than they could treat it and so eventually her mom passed away. Only Mackenzie was lucky in a sense because she had such a great community around her. Her friends and neighbors came together to pray when her mother passed. Her mother’s school where she taught for several years had also held their own memorial. The community truly did come together to say goodbye to an amazing woman. Mackenzie was surrounded by so much support that she has what she needs to survive this.

It’s going to be hard for a while. Mackenzie came close to tears when she went to go get her nails done because the last time she did so had been with her mother and so right now everything is going to hurt. Everything is going to remind her of her mom. Mackenzie is trying to work through her grief and she’s also being there for her kids because they don’t understand what’s going on. She had explained to her eldest son that Nanny wasn’t coming out of the hospital and she didn’t mention death or anything like it. She just said Nanny was never going to leave the hospital. And the conversation about heaven and angels came afterward.

Cheyenne meanwhile has Ryder all to herself now. Ryder’s father Corey had gone away for two months because he was joining an MTV Challenge and so he was going to be competing for some serious money. He also couldn’t reach out or talk to his family while he was doing so. His girlfriend Taylor was struggling with this because she’s pregnant and she wants to hear from him because it reassures her. Taylor was doing worse than Ryder. Ryder is still a baby and she managed to get accustomed to her dad being away. Ryder even has a regular schedule now. She wanted to go to school and so her mom signed her up.

Ryder is going to go to preschool prep. It was a school before the official schooling began and it was going to help her down the road. She’s going to make friends. She’s going to get ahead on some of her schoolings and most importantly it’s something Ryder wants. She couldn’t wait to go to school. Her mother had wanted to push it back some because she wanted to spend more time with the toddler and Ryder shut her down. She’s young, but she’s a social butterfly. She wants to go off and explore. Ryder doesn’t want to stay cooped up with mom. She wanted to go to school and she took a shine to it from the start. She didn’t look back or call for her mother. She was just super chill about it.

Maci might have to let go of her son some as well. Her son Bentley is old enough to start making decisions and he’s decided he wanted to go to private school. His friends were going to this private school. He also has his paternal side of his family supporting his decision to go and so his mother had to bend. Maci allowed him to take the test for the school. The test would at least tell them if he could go and if he can – it will come back to Maci deciding whether he does go. She could send him to the school of his dreams and it would cost her family twelve thousand dollars. It was a steep price and yet Bentley really wants this.

Bentley also was too getting used to having his way. His paternal grandparents allowed to always get what he wants and even his own father has had a problem with this. Ryan thought Bentley was being spoiled. He couldn’t talk about it with Maci because the restraining order was still up and still they surprisingly both felt the same way about it. They both wanted to set up boundaries with Bentley. It was getting to be harder to do so with Ryan’s parents spoiling the boy and Bentley getting older. Bentley can voice what he wants and he wanted a private school. He even passed the test to get it.

He did so well his mom and stepdad later told him they were going to explore the idea of private school. They were going to take a tour. They were going to check out this school for themselves and they might even seriously consider it as long as Bentley follows certain conditions. Bentley has to keep his grades up if he goes. He couldn’t fall behind on his schoolwork or on his extracurricular activities. He also had to be on his best behavior. His parents weren’t going to reward him if he wasn’t being good. And so Bentley has to earn the right to go to private school.

Catelynn and her husband Tyler were worried about their friend Ashley. They had bailed Ashley out of prison and she was staying with them as she got back on her feet. The couple had given Ashley conditions for supporting her. They wanted her to go straight from work to home and no other place. She was an addict and she couldn’t afford to relapse. Catelynn had recently given up her idea of becoming a Vet Tech because it would take her away from her kids too much and so she also didn’t want an addict that couldn’t be trusted around her kids either. She and Tyler had flipped out when Ashley didn’t come home.

Ashley had gone to a party. She hadn’t come back home in over a day and so this brought back memories for Catelynn and Tyler. They’ve dealt with his dad. His dad was an addict as well and so they didn’t want to go back down that road if they didn’t have to. Ashley either had to get her crap together or she couldn’t stay with them anymore.

And Mackenzie has fallen so deep into a depression that her husband became concerned that she might kill herself and rather than be there for her – he began pulling away.