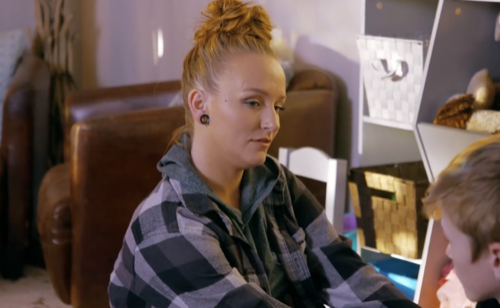 Tonight on MTV Teen Mom OG returns with an all-new Tuesday, May 19, 2020, episode and we have your Teen Mom recap below. On tonight’s Teen Mom Season 8 episode 22 as per the MTV synopsis, “Amber seeks advice from her psychiatrist when she begins to pull away from Dimitri. Maci asks Taylor to talk to Bentley about respecting girls while Mackenzie and Josh worry Gannon is struggling to accept his grandmother’s death.

Exhausted from making home-made food for Vaeda, Catelynn finds an organic baby food company with similar values and travels to New York to consider a partnership.”

Maci’s son is growing up so fast. Bentley was going into middle school. He was making decisions for himself and he even has a girlfriend. Bentley was growing up so fast that it was time to tell him about the birds and the bees. His parents needed to have a conversation about sex and safety. Maci was a teen mom and she doesn’t want that for her eldest son. She wants him to have options. Bentley should know everything there is about sex and babies so that he could make a well-thought-out plan for himself. He was in the room when his younger siblings were born. He, therefore, knows where babies come from and he just needed to be told how they got in there.

Cheyenne’s daughter was released from the hospital. Her daughter Ryder wasn’t keeping down food and so she took her in. Ryder later got better at the hospital. She was released and sent home, but then her condition took a turn for the worse and she had to go back to the hospital. It was a very trying time for the family. Cheyenne was genuinely scared for her daughter and luckily everything turned out alright. Ryder got better again. She was released and her daddy was coming home. He was coming home not knowing what happened to Ryder. Cheyenne hadn’t told him because she didn’t want to distract him from what he was doing and so Corey wasn’t told anything.

Corey was kept in the absolute dark. He had joined a reality tv show called “the Challenge” and he could walk away with a million dollars if he won. Corey hadn’t needed any distractions. He needed to be focused on the game and it wasn’t just Cheyenne that thought so. She had kept in contact with his family. She even was texting his pregnant girlfriend who also said not to tell him. No one thought Corey should be told and Ryder’s condition did stabilize on its own. There was no need to worry him over nothing. Ryder was okay and he was coming home now. Corey can now tell them what he thought about being kept in the dark.

Gannon also wasn’t taking his grandmother’s passing very well. His sister Jaxie was actually doing a lot better because she was talking about their grandmother and she was telling stories about her. Jaxie wasn’t afraid to talk to their grandfather. Her brother Gannon was the exact opposite. He kept everything bottled in and his mother was worried about him. Mackenzie has caught him crying alone sometimes. She would try to ask him about it and he would wipe away his tears real fast. He didn’t want anyone to see them or to talk about it. Gannon also couldn’t be away from home. He went to a sleepover and he had to be dropped off back home because he was in a weird place.

Catelynn meanwhile was thinking about her career. She wants to do something she’s passionate about and so she’s considering her options. She even wanted to go back to therapy to talk it out with someone. She’s tried telling her husband Tyler and things were different for him because he does have something he cares about. He has his kid’s clothing line. He knows what he wants to do with it and the sacrifices he’ll have to make in order for it to be successful. Tyler is currently looking for another manufacturer because his current one has raised the prices on him. And so he’s looking for another one because he doesn’t want to make things overseas.

Catelynn doesn’t have that. She thought she wanted to be a Vet Tech and then she heard how much time she’d have to devote to it. Catelynn realized that becoming Vet Tech might be too much on her. She didn’t want to give up so much time with her children and so her children gave her an idea. She likes to make the youngest one her baby food herself. It was very time consuming and so Catelynn did her research. She found out about an organic baby food line. She reached out to them and she would like to work with them one day. This would be something she’s interested in. It would also be something she can do with her kids.

Catelynn later visited the company’s headquarters. She told them she was passionate about what they were doing because it meant she gets to spend more time with her baby and she wanted to lend them her influence. She does have a strong social media presence. She wants to help out the company and help them reach more potential buyers. Catelynn asked them if she could work with them. They soon realize what a great opportunity she was providing them and so they quickly got on board. They agreed to work Catelynn. They now just need to make things official and so far its been going great.

Mackenzie and her husband Josh had to talk to Gannon. They noticed he’s been having problems and they wanted him to open up. They brought him to their bedroom. They put him on the bed and asked him what was wrong. Gannon hasn’t been the same since his grandmother died. He revealed to them that he’s worried something bad is going to happen again and that’s why he’s been so sad. He’s afraid something else is going to happen outside of his control. He thought by staying home that he could help prevent it and right now that’s what he needs. He needs to feel like he can control what happens to him. His parents let him talk about it and they comforted him to the best of their ability.

Bentley got the “talk”. He was told about sex and the most important aspect of that being consent. Bentley was pretty shy as he was talking about with his stepdad. Maci wanted her husband to talk to Bentley and not his father because she doesn’t think Ryan would be as serious about this as he should be. Her husband also couldn’t think of a good thing to say about Ryan and so Ryan was left out of the equation. He wasn’t informed about the “talk”. He didn’t take any part in it and Maci wasn’t even going to tell him down the line. She’s the one that handles things for their son Bentley and so Ryan was being cut out of the picture.

Then there was Amber. Amber didn’t really grow up around a lot of love. She had gone looking for it at an early age and that’s how she became a teen mom. She had fallen in love at the time with Gary. She had tried to start a family with him and the only good thing that came out of it was their daughter. Amber’s relationship with Gary was testy for a while because Amber pushed him away and she’s doing again with her latest boyfriend Dmitri. Dmitri has done everything she’s asked of him. He did the lie detector test and he passed. He now wants to move on with Amber and she’s looking for reasons to push him away. And so she talked about that in therapy.

Corey came home. He came home and he ran straight to Ryder. Ryder was glad to see her daddy. She had missed him in the weeks he had been away and she had even made a photo for him. Ryder was her usual bubbly self. Her condition was much improved and no one could tell she had been sick. Corey had been glad to see her healthy. He understood why his family kept him in the dark and he knows how lucky he is to be co-parenting with Cheyenne. She took so much on herself so that he could do what he had to do and he thanked her for it.