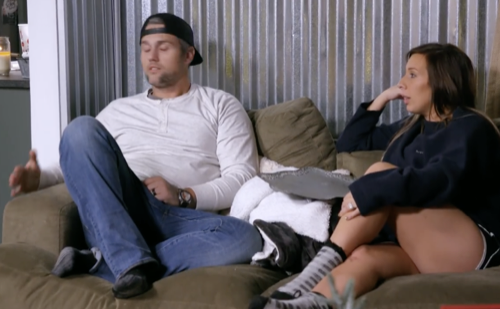 Tonight on MTV Teen Mom OG returns with an all-new Tuesday, April 28, 2020, episode and we have your Teen Mom recap below. On tonight’s Teen Mom Season 8 episode 19 as per the MTV synopsis, “Amber starts a new romance, while Catelynn considers starting a career as a vet tech. Maci is content co-parenting with Jen, Ryan’s mom, but Ryan is frustrated. Cheyenne ends her relationship with Matt.”

Catelynn feels better now. She worked through some of her trauma in her childhood by talking to her mother and she felt better afterward. She even looks better. She’s smiling more and she’s thinking about her future as well. Catelynn wants to get a job. She’s always loved working with animals and so she wants to do something with that. She was currently considering the position as a Vet Tech. A Vet Tech was as a nurse for animals and Catelynn seemed really interested in it. She was looking at courses. She had support from her husband if she wanted to go back to school and so this really could be a new start for her.

Amber was also considering her future. She realized after everything that happened with Andrew that her sole focus needed to be her children and so she talked with producers about it. She told them that James and Leah were what matters. She also added that even if she were to begin a new relationship then that person would be told that her children are her first priority and therefore she was asked if there was anyone in the picture. There is someone. Amber has been talking to a guy. She said this new guy seems nice and she felt she was ready to be in a relationship. It was hard being alone. Amber misses the companionship and she might have found it with this new guy.

Cheyenne was fresh from a breakup. She ended things with Matt because she wasn’t happy with him and she didn’t realize how unhappy she was until he moved. He had put her on the spot when he moved. He had needed a place to stay and he had wanted to live with Cheyenne, but she had a promise to herself and she hadn’t wanted to break it. She had promised herself she would be married the next time she moved in with someone. Cheyenne had wanted that commitment before she put herself out there again and she wasn’t going to get it from Matt. Cheyenne is single again. She also wants to stay that way for a while. She was in no rush for a new relationship.

Mackenzie meanwhile was dealing with the soon to be loss of her mother. Her mother is really sick. Her cancer has spread throughout her body and she’s been warned to take it easy. Not that she listened to the people who told her son Mackenzie’s mother went ziplining because she said “you only live once” and she wanted to enjoy her life while she still has it. She wasn’t afraid of dying. She had made peace with it and Mackenzie hasn’t. She doesn’t want to lose her mom. They were a close family and her mother has been unwaveringly supportive of her since she was a pregnant teenager who didn’t know what to do. And so Mackenzie has been hoping for a rare miracle because she still doesn’t want to deal with the reality.

Maci is worrying about her son. She has allowed Bentley to be around his father Ryan as long as Ryan’s parents were there as well and that seemed to be working. Her son is enjoying himself with his family. He hasn’t mentioned anything particularly worrisome and so Maci’s problem is more that she doesn’t like how her ex Ryan looks. She had seen him when she was dropping off her son. She had come close to him and she didn’t think he was fully sober. She thinks he had a few drinks in him. He had looked like he had a few drinks and so Maci assumes he fell off the wagon. She thinks he’s back to his old self and she doesn’t want her son to be around it.

Maci didn’t pursue what she was thinking. She didn’t confront Ryan or asked his family about it and so she didn’t know about the issue brewing with Ryan. It turns out Ryan feels like he can’t say “no” to Bentley. He feels like his own mother is stopping him and that she doesn’t want to upset Bentley because she was afraid Bentley might not want to come over anymore. So, Ryan says that’s how Bentley is getting away with being disrespectful. He wants to correct his son and he doesn’t feel like he has the support to do so. He said that’s one of the reasons Bentley is also spoiled as well. Bentley gets to do whatever he wants when he’s with Ryan’s mother and Ryan wants to say something to her about it.

Mackenzie’s mom later took a fall. She was rushed to the hospital and her family was told they needed to come to see while they still could. Her mom was dying. There wasn’t going to be a last-minute miracle and unfortunately, Mackenzie has to make her peace with it. She finally faced the truth that her mother was dying. She collected her children and she did her best to explain to them what’s happening. She wanted them to understand how important to be good for grandma at the hospital. She didn’t want anything to go wrong as her children said goodbye to her mom. And Mackenzie said her goodbye as well.

Cheyenne’s ex left for his trip. He’s taking part in another reality show for MTV and it’s going to give him to possibly earn a million dollars. Cory couldn’t have passed on such a chance even if he wanted to. He had to take it and that meant he had to leave his daughter plus his pregnant girlfriend. Taylor and Ryder went with him to the airport. They said goodbye to him and yet Ryder still didn’t understand what was going on. She was only two. She said goodbye to daddy and she thought she would still get to see him later. She didn’t really understand until she was asking for him and Cheyenne had to once again explain that daddy went on a trip.

Amber’s new boyfriend is Belgian. He and Amber met online and the relationship has been going so well that Amber is ready to take the next step with him. She wants to meet him in person. They’ve been talking about it and so they just need to finish setting things up.

Catelynn wavered on going back to school because she was afraid of failing and so her husband gave her he push she needed.