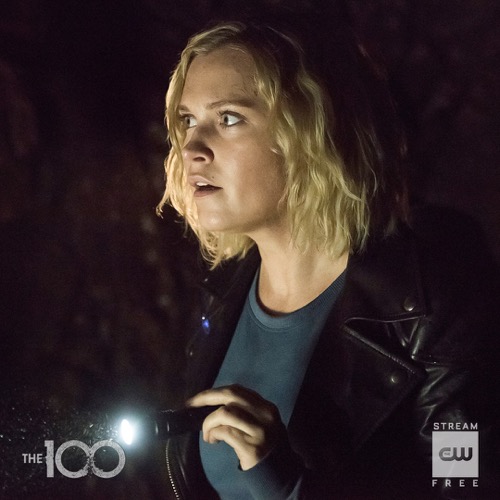 Tonight the CW series The 100  airs with an all-new Wednesday, June 24, 2020 season 7 episode 6 and we have your The 100 recap below. On tonight’s The 100 season 7 episode 6 called, “Nakara,” as per the CW synopsis, “Clarke and her friends find themselves on a planet that is not what it seems.”

The disciples have Charmaine. They keep trying to extract her memories and intel but day after day she fights them. Eventually, she breaks free after biting the jugular of a guard.

Indra arrives to see Russell out of his cell. She commands he gets brought back to his cell. She tells her crew not to speak with him about anything. She heads to Russell’s cell and tells him to obey. He makes a comment about her losing a bunch of guns, angering Indra. He knows she is afraid they will follow him. She doesn’t object.

Clarke and the gang dig in the snow and ice. They have found a body and it is human. They decide to move on and find the stone and their friends. They come up with an opening in the ground. They discover the stone in 200 meters down. They all climb in and down. Raven stops when she realizes something is in the tunnel. After the creature leaves, they keep moving.

The make a stop on flat ground and see acid oozing from rocks. Meanwhile, Murphy is having a drink when Indra arrives. She needs his help getting her guns back. They head to find the partner of the man Raven accidentally killed when they were fixing a transformer.

Charmaine makes her way down a hall when she comes upon Hope and the others. They hug and cry. Octavia shares the sad news that Bellamy is dead.

One of Gabriel’s children makes his way in to try and kill Russell who reveals he isn’t Russell, just a powerful entity who has stolen his mind and now his body. They sit and talk. He thinks Wonkru is weak and needs an ally.

Clarke and the crew realize they are actually inside the digestive tract of a creature. They need to find a way out before it is too late.

Octavia runs back into one of the Disciples who helped her. He pulls through for her once again, giving her directions to escapee with Charmaine and the others.

Indra sits with Madi. She is failing her mission. They need their commander. Madi wants to talk to Clarke. Indra tells her how Clarke is helping the people.

Raven cries. Clarke comforts her when she says this is their karma. She cries about sending Hatch to fix the pipes and how she was afraid. Meanwhile, the crew is shooting at the walls of the beast they are inside.

Just as Madi is to address the crew she runs off in a panic. Murphy and the others want to know why now. She shares that Russell isn’t himself, he is now Sheidheda. They tell Indra that she needs to lead.

Indra meets with Wonkru and tells them she will lead. Knight fights her. She overpowers him with a staff but doesn’t kill him. She earns the crew’s respect before leaving the room.

Gabriel and the others can only escape by heading out into the surface. When they are told they need special masks or they could face extinction, Gabriel surrenders.

Meanwhile, Clarke and the others make it out alive.