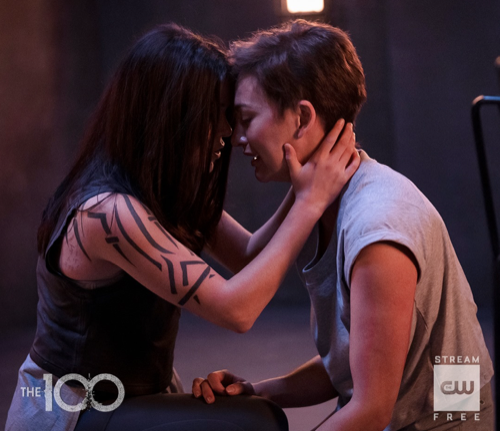 Tonight the CW series The 100  airs with an all-new Wednesday, July 1, 2020 season 7 episode 7 and we have your The 100 recap below. On tonight’s The 100 season 7 episode 7 called, “The Queen’s Gambit,” as per the CW synopsis, “Emori tries to heal Sanctum’s old familial wounds while Echo, Octavia, and Diyoza struggle with new ones.”

Gabriel is brought to see the leader of the Disciples. He has Nakura’s body. He shares that he hung himself in the cabin. He wants Gabriel to help decipher the stone.

Emori wakes ahead of Murphy. She is planning the unification party. When Murphy gets ready for the day she tells him how important the party is.

Madi is feeling a little better after having a panic attack, she tells Jackson. Emori shows up. Jackson talks to her about her feelings. This party will make her feel better, she admits.

Murphy brings Russell breakfast. A secret message, unknown to Murphy is in the breakfast, telling Russell about the party. Russell admits to Murphy who he is. He thinks Murphy is scared. Murphy denies this. They sit and play chess. Russell shares that something bad is about to happen and people will die.

Bellamy and Echo talk about their weaknesses. He admits his sister is his weakness. Loyalty is her weakness. They talk about getting back to the ground. Their love is real. They kiss. Echo cries remembering all of this, telling Octavia they aren’t friends now. Octavia reaches for her and hugs her. Echo pushes her away but then finally gives in. They are family.

Hope and Charmaine are in a cell/ They talk about how Hope learned to fight. They argue about who was supposed to save who. Hope thinks her mom is mad because she turned out to be a killer too.

Nicky drinks, upset over her husband’s death. She tells Nelson she would love revenge. She asks him if he wants to join her. Emori arrives. Nicky has nothing nice to say. Nelson also leaves when Emori tries to talk to him. She offers help to him and his people. To reunite him with his family. He tells her he doesn’t care. After he walks off, she takes his glass from the bar.

Murphy and Russell continue to play chess and talk about how he is Sheidheda. He threatens Murphy, telling him he is dangerous. If Murphy wins the game, he will tell him what he is planning.

Charmaine and Hope talk about what she knows about her mother. Charmaine is ashamed, others see her as a terrorist. She was but Hope disagrees. Charmaine tells her that her father was a psycho. Hope has never heard this before. They fight about how to get out and get free. Hope thinks they can do it. Charmaine tells her to grow up. If she is so confident they can fight. Charmaine overpowers her. After she tells her how revenge is a waste. Hope cries, remembering when she lost her. Charmaine hugs her. They cannot lose each other again.

In their cell, Echo has cut her face. She wonders why they have been paired together. Octavia looks scared. Echo demands to speak with them, pounding on the door. They let her out to see the leader. She and Octavia agree to fight alongside the Disciples.

Emori welcomes many to her party. She tells one couple that Daniel hasn’t arrived yet. Meanwhile, Russell and Murphy are still playing so that Murphy can win answers. Murphy picks up on the fact that Russell is delaying to game to stop him from attending the party.

Emori brings Nelson to meet with his parents for the first time. Nelson’s mom hugs him and cries. But his dad calls him an abomination. His dad chokes him. Nelson stabs him. They are all in shock. Nicky shows up with guns blazing. She hits Emori. Nelson and his people plan to join Nicky. Emori begs him not to. Meanwhile, Murphy is attacked by Russell who lets him go quickly.

Gabriel examines the stone with some of the disciples. Clarke, Raven and the others arrive. Gabriel shares that Bellamy is dead. Clarke is speechless. Their leader tells Bill that they finally have the key.