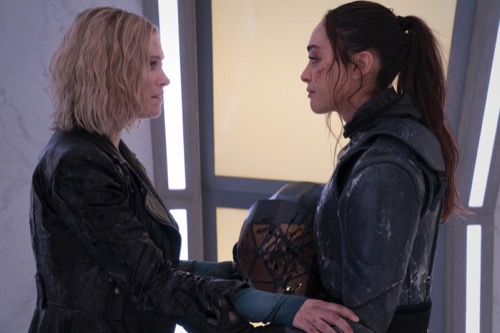 Tonight the CW series The 100  airs with an all-new Wednesday, July 8, 2020 season 7 episode 8 and we have your The 100 recap below. On tonight’s The 100 season 7 episode 8 called, “Anaconda,” as per the CW synopsis, “Clarke confronts a new adversary. A surprising connection takes us back to the past and the nuclear apocalypse that destroyed the Earth.”

Clarke is ready to fight. Octavia and Echo are in trouble. A powerful disciple named Bill asks Clarke if his daughter is still alive in the AI in her head.

The Future – Callie is at home in her room with a friend. They have been getting into trouble. She stitches her friend’s wound before her mom comes in. Her mother tells her that her father wants to talk to her about dropping out of school. During their talk, Bill gets a message that missiles are in the air. Callie’s mother panics, packing. A chopper is coming for them. Callie’s mother tells her this is life or death.

After getting into the chopper, they see their home explode from the air. A short time later, Callie, her mom, and brother meet with her dad. He is going to save them. He shows them the symbols and tells them he is about to knock off the apocalypse.

Callie heads to make a run for it and meets a guy who also shares her political activism views. Her brother comes out and tells her to return to their level. Upset there is room on their level and she left her best friend behind, she tries to get her brother on her side. He doesn’t agree with anything she might have planned.

Later, Bill and the family meet a woman who can actually hear the space ball has to help aid in getting them to safety.

When the woman gets close the space ball rotates and opens a portal. They fight over whether they should take the journey. Callie thinks it could do things to their bodies and minds. Maybe they won’t make it. They begin to work on finding answers.

Later, after some time has passed Callie and the woman become friendly. She is able to talk to her about Bill and his narcissistic tendencies. Callie suspects the woman is part AI and she is correct. Together they look at the space ball. It begins to spin. The woman Becca gets close and disappears. She comes back minutes later. She is scared. Bill and his son Reese arrive to see her. She tells them she saw Judgment Day. Bill tells them all Becca needs to be put in the box when she says they need to shut it all down. After Callie pleads with him, he tells her to go.

Callie brings water to Becca. Becca tells her not to let Bill get the flame that will then get him a code to wipe out the human race. Becca knows she will be killed because she refuses to share the code. Callie promises to stay quiet. They come and take Becca while Callie screams for them to stop.

Becca and Reese challenge one another to a fight. Becca wins. She and several others then run, opening a door that will bring them to earth safely after having had a special blood treatment. Bill is furious and tells Reese to go after her.

In The Future – Clarke tells Bill Callie is in the AI. She isn’t saying much more until she can see Octavia and the others. Bill brings them in and they look as though they have joined the Disciples.