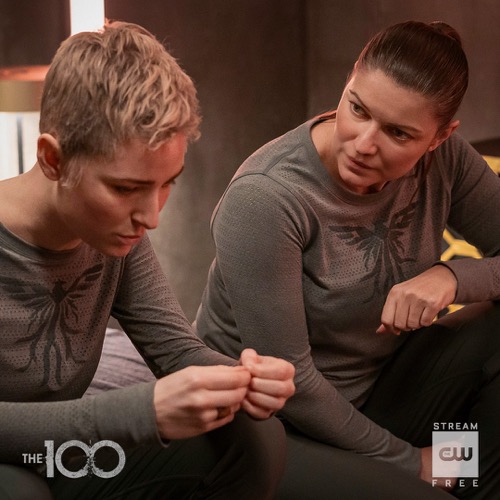 Tonight the CW series The 100  airs with an all-new Wednesday, July 15, 2020 season 7 episode 9 and we have your The 100 recap below. On tonight’s The 100 season 7 episode 9 called, “The Flock,” as per the CW synopsis, “Murphy and Indra must defuse a tense situation. Meanwhile, old friends make new allegiances.”

Three Months Earlier – One of the leaders [Anders] of the disciples is training Charmaine, Octavia, Echo, and Hope. He wants them to understand his people’s cause. He shows them a dangerous planet, advising them to wear masks. Meanwhile, Madi and the others are under the control of Nikki and her people. Nikki extends an invitation to Murphy, Raven, and Russell. If they don’t show she will start killing.

Indra shows up to talk to Murphy. Indra reports that she only found bodies and blood at Gabriel’s camp. She is annoyed this is all happening and she was gone for a day. Murphy tells her to prepare the crew while he heads to Nikki.

Charmaine confronts the disciple who tried to help them. She questions him. He tells her that during training they will mess with their minds. She needs to maintain control. Just then, Anders comes in to pair them with a partner and begin fighting. He is impressed by Hope. He plans to break them so they only care about mankind.

In her mind, Anders takes a young baby Hope from Charmaine. She screams “no”. After, she comes to. She is connected to Anders. He tells her she needs to come over to the cause or she will lose her life and sanity.

Indra and Murphy visit Russell to tell him about Nikki and the hostage situation. He wants 30 minutes outside and someone to play chess with then he will help. Indra agrees. He shares that there is a tunnel under the palace they can use to get in.

Anders shows the ladies how they bring embryos to life without the womb of a mother. He then brings them to see the children. Anders leads the class in a lesson about self-control. Hope isn’t buying it. Anders sees this. Later, the ladies tell Hope she needs to hide her feelings better.

Echo is especially annoyed and tells Hope she isn’t going down with her. The next day, they return to training. They are brought to the weapons room. They learn that there is biohazard materials locked up. It could wipe out all of Bardoe. They take part in a shooting competition. Echo wins after breaking the rules. Anders smiles.

One of the disciples who has helped Octavia comes to visit her in her room. They talk and end up spending the night together. Meanwhile, Murphy arrives to see Nikki with Russell. She wants Raven. He promises Raven is on the way. Murphy and Emori confess they are not Primes. Russell confesses he too is not Russell. Just as Murphy tells Nikki Hatch was a hero, Indra and the crew arrives. Indra has them on their knees in seconds.

Hope confesses to Echo she stole the flamethrower. Echo is not keen on the plan to take them all out. Hope doesn’t want Charmaine and Octavia to know since she feels as though the Disciples have brainwashed them. Hope tells her she will do this all alone. Out in the woods, Echo tries to stop her. Desperate, she kills Hope. They both wake after being connected. Echo has passed the test. The same scenario plays out with Hope and Charmaine. But Hope fails after she allows her mother to go against the disciples. Octavia also passes along with Charmaine. Later, they all take part in a ceremony with the exception of Hope. Echo will decide her fate. The guards take Hope away for 5 years to have her bonds broken down.

Indra and her crew leave the people with Russell behind locked doors. She tells her people not to open the doors no matter what. Indra tells Murphy and Emori she is allowing a demon to be killed. Murphy demands the door be opened. Inside, Russell has killed all of the people.