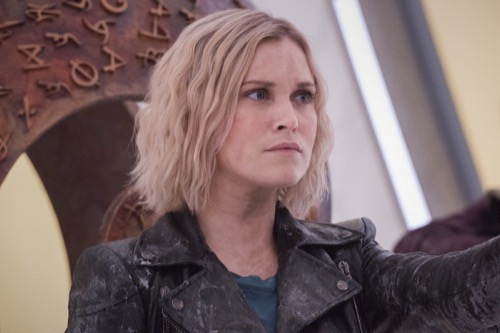 Sheidheda has escaped after slaughtering a roomful of people. He heads to find Madi. Madi realizes quickly it is Sheidheda and not Russell. He tells her to kneel and he will let her live or he will kill everyone she cares for. She kneels. He leaves as she stays on the floor crying. Meanwhile, Clarke finally sees Octavia, Diyoza, and Echo. She realizes they have been brainwashed. She offers the key but she needs to talk to them alone.

Echo heads with a guard to bring Hope to Penance. The guard tries to choke Hope after Hope attacks her. Echo kills the guard. She isn’t brainwashed after all. She has a plan. She tells Hope to put on the uniform. They have one hour to get out of here.

Murphy finds Madi. Emori and Indra are with him. They hear Sheidheda broadcasting from the palace. He is trying to take power from Indra.

Gabriel, Niylah, and Jordan guard Bill. He reveals that they need Clarke to unlock a code so they can fight their last war. Bill then walks off to go to lunch, not afraid he will be shot.

Clarke, Miller, and Raven meet with Diyoza and Octavia. They share that they are not brainwashed. Hope meets with them. They need to move. They all ask Hope were Echo is. Hope shares that she has stayed behind. Octavia realizes it has to do with Bellamy and Levitt. Octavia runs to find her.

John and Emori stay with the people while Indra looks for Sheidheda. John believes the people hate them and that they are also in danger. Meanwhile, Gabriel sits with Bill for lunch. Bill tries to get Gabriel to join the fight to save humanity.

Bill tells him how his people do not have betrayal and lies between them all. Anders interrupts. Meanwhile, Clarke and the rest of the team find Levitt. He broke and told Echo how to access Gem9, a chemical she plans to kill all of them with.

Jordan looks through the stone Bill and his people follow. Jordan thinks Bill may have misread the message. He thinks the last war isn’t a war at all. Gabriel comes in and they tell him. Meanwhile, Indra and the crew try to find Sheidheda who is now citing the lineage. He speaks to the others, telling them to bend a knee. Indra arrives just in time. She calls for single combat. They head outside to fight one on one.

The two fight. Indra loses her sword and is forced to take a small blade from someone in the crowd. Just as he overpowers Indra, Madi comes out of nowhere and stabs him. He is just about to finish her when Indra begs. She will kneel. She takes a knee. The others follow. Indra passes out.

Sheidheda takes a crew with him to begin killing off the rest of the family members of those he already slaughtered.

Echo takes the weapon from its canister, ready to dump it into the water supply. Clarke and the others stop her, trying to talk her out of it. Raven refuses to leave. Echo breaks down. She doesn’t go through with it. Anders comes in. He brings some of his men. He tells them Echo will be sent to penance for 20 years. Hope kills him by slitting his throat. Anders drops the weapon, a splash landing on Diyoza. She tells them all to leave as she dies. Hope screams, hysterical.