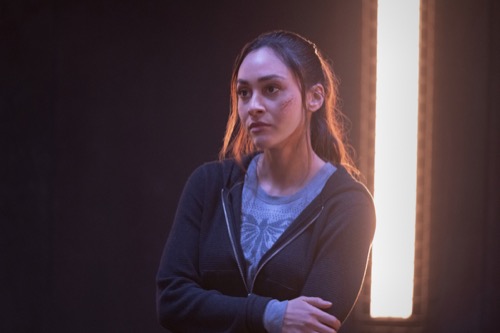 Echo becomes upset. Why is he doing all of this? She explains how she spent the last 5 years trying to become a disciple and avenge him. Bellamy cannot help what he believes. This is for all mankind.

Sheidheda wants to know where Madi is. He demands Indra tell him. She doesn’t break. Indra goes back to cleaning up the bodies and discovers a survivor. She tells them to play dead as she drags them away. Meanwhile, John gives Trey and the others who are in hiding from Sheidheda some medicine and supplies. Emori tells John she is proud of him.

He thinks waiting for the others to save them is not a good plan. Emori is impressed by how much he is worried about everyone else. Indra shows up to tell them that Sheidheda killed the children of Gabriel but she saved one of them. Indra warns that he is also looking for Madi. Indra tells him she is proud of him before she goes.

Emori brings the survivor to Madi, Trey, and the others who are hiding. Nikki knocks on the door and forces her way into John’s. He has to obey or be shot. When she gets into the room and sees the others, Emori knocks her out.

Jordan tries to talk to Hope about her mother. She is so angry, but after he tells her that her mom is a hero and that her mother did it all to save her soul, she finally breaks down.

Octavia tells Clarke she finally understands her connection with Madi now that she has Hope. Bellamy comes in. Clarke and Octavia try to understand him. He explains his experience on the mountain that has changed him. He just wants to know where the flame is. Clarke tells him she will never share what she knows. He has the guards take her away.

John gets Nikki to calm down while Clarke offers to take Bill and the others to the flame if they don’t hurt her friends. Meanwhile, Indra continues to clean up the mess after Sheidheda killed the children of Gabriel.

Madi attempts to try and help the survivor of the children of Gabriel. She talks about what it was like to go through the death wave. She gets him to eat.

John and Emori see they have visitors. He gives her his gun. He will go see what they want. John answers the door to Sheidheda and some of his new followers. Sheidheda demands John to open a door. Emori comes over the intercom and threatens to blow the reactor if John gets hurt. Sheidheda takes John away.

Bill sends Clarke’s friends to a safe place and it is not Sanctum. She is not happy but he promises they will be safe if she keeps her word. Meanwhile, Sheidheda makes John play chess against him. They are interrupted by the arrival of Clarke and several others.