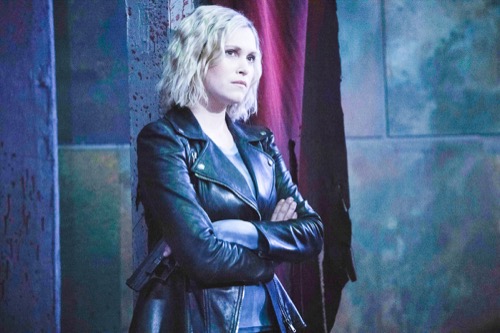 Tonight the CW series The 100  airs with an all-new Wednesday, September 23, 2020 season 7 episode 15 and we have your The 100 recap below. On tonight’s The 100 season 7 episode 15 called, “The Dying Of The Light,” as per the CW synopsis, “Clarke and Octavia mount a desperate rescue mission as the Disciples close in on what they want.”

After part of the bunker collapses, Murphy looks for Emori. Raven and the others come to help, trying to move rumble. They find her but she has a piece of metal sticking into her abdomen. Meanwhile, Clarke, Indra, and the others work to get to Madi.

Madi is with Cadogan. He brings her to Levitt who reads her mind, looking for the code. Madi tells Cadogan he is wrong and that the code isn’t a way to the last war but it is a test. Jordan told her so. Cadogan doesn’t believe it. He asks Levitt to dig deeper into Madi’s mind.

Indra, Octavia, Clarke, and the others talk about the code and what it all means. Jordan tells them it is all a test and not a war. Clarke has heard enough and wants to get Madi and kill Cadogan. Gaia calms Clarke who feels like she cannot breathe.

Murphy and the others get Emori free before Jackson cauterizes her wound. She screams. Jackson warns them they need to get her to the sanctum and fast or she won’t make it.

While searching for Madi’s memories, Levitt sees Becca. Cadogan admits he had a disagreement with her. Madi refuses to help any further. Levitt gets upset. Cadogan dismisses him.

Levitt has a plan now that he knows the truth about Cadogan. He heads to open the bridge, not realizing its location has been moved. Meanwhile, Clarke and Octavia make their way across the bridge and right into a field with soldiers. Clarke raises her hands when she sees the men with guns.

Jackson packs Emori’s wound while Murphy and Raven try to get them out of the room. They dig for the stone. Raven comforts Emori who tells her she needs to stay behind. Raven refuses, especially after what happened with Hatch. Emori suddenly stops breathing. Jackson runs to help her.

Levitt takes out a soldier to gain access to a hallway. Meanwhile, Clarke and Octavia sit in a cell. Octavia tries to comfort Clarke, telling her someone brought them here. Suddenly, Levitt opens their cell. He is there to help. He hugs Octavia. They head to an adjoining cell and free Russell, making a deal with him to distract and take down some of the disciples. He agrees.

Raven, Murphy, Jackson, and Emori cross the bridge to Sanctum after reaching the stone. Meanwhile, Levitt opens the door to get Madi with Octavia and Clarke behind him. When they get to Madi she isn’t responding. She is breathing but not alert. Clarke cries, holding her while Levitt discovers she has had a stroke. He also discovers Cadogan managed to get the code. They need to go now. Clarke says goodbye for now to Madi. They need to stop him. After they leave, Madi cries.