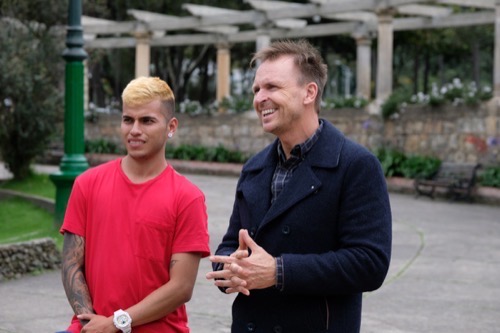 Tonight the CBS series The Amazing Race airs with an all-new Wednesday, October 21, 2020, season 32 episode 2 and we have your The Amazing Race recap below. In tonight’s season, 32 episode 2 called, “Red Lipstick Is Not My Color” as per the CBS synopsis, “Teams race through Bogotá, Colombia where they encounter the “Yield,” which gives them the power to stop another team’s race for a designated amount of time.”

Teams make their way to catch a flight to Columbia. Kellie & LaVonne are in 9th place and say that everyone was gunning for them because they are Olympians and they underestimate them. De Angelo & Gary finished in tenth place, not what they wanted, but they will get past it, they came to win. Leo & Alana are at the airport, Jerry & Frank right behind them. All teams are flying on the same plane, southwest, to Bogota, Columbia. All teams are hyped and ready to go.

The teams arrive at the airport, they must travel by taxi to Nemocon Salt Mine. Home to the world’s largest salt rocks in the world. Once there, they must search the underground tunnels which cover an area of more than two acres for a 10, or 20-minute hourglass. Then sign up for departure time in the morning. The hourglass will give the teams the power to stop other teams from racing for 10 or 20 minutes.

Hung & Chee are team number 1, they sign up to depart with the first team at 6:00 am; Will & James are on the same departure time, with Riley & Maddison, DeAngelo & Gary, Eswar & Aparna. The rest of the teams will be departing at 6:30 am.

At 6:00 am the first round of teams are ready to go and they must race on foot to Templo Parroquial San Francisco de Asis. Once there they must climb the bell tower and search for a piece of pre-Columbian art or an emerald. Then teams will battle their way through heavy traffic as they make their way back to Bogota to plaza del Rosario. Teams with an emerald must deliver it to an emerald street broker, while teams with a golden raft must deliver their item to an archeological professor to get their next clues. Finding the items is easy, the traffic is a nightmare.

Riley & Madison give their artifact to the professor and he says it is a fake, the two look like they are going to faint, then he chuckles and gives them their clue. Teams must now travel by taxi to Escuela Nacional Circo Para Todos and search for their next clue. This is the first opportunity for teams to stop another team if they use their hourglass.

The five teams that were on the same flight are all working together. De’Angelo & Gary are in the first place and they choose not to yield anyone. Hung & Chee the same. Now it’s a Roadblock for the teams. This is a circus school dedicated to promoting a culture of non-violence and peace where young people learn extraordinary skills. This Roadblock requires one member of each team in “who feels like clowning around,” attempting the wheel of death and then walking on a tight rope holding a tray of fragile glasses; which is a bottle of wine and two half-full wine glasses.

This is crazy, walking a tightrope! Riley & Maddison also choose not to yield anyone. DeAngelo & Gary are still in the first place and they have finished the Roadblock, they must now travel by taxi to Carrera 26 # 10-03 Bogota and search for their next clue. Hung is done on the tight rope and she and Chee are still in number two. Kaylynn & Haley are currently in the last place, they just dropped off their artifact.

DeAngelo & Gary get the next clue, teams must customize a volqueta; they all have attached a box full of decorations on to a truck, but there is one item they are all going to miss, attaching the horn to the front of the truck. When the Bogotano customizer is happy with their work, he will give them the next clue. Kaylynn & Haley are in ninth place and they choose not to yield.

Hung & Chee are now in the first place and get their next clue. They must head to Parque Nacional Enrique Olaya Herrera to the pit stop. The last team to arrive at the pit stop may be eliminated.

Hung & Chee are the first teams to arrive at the pit stop and they have won a trip for two to Switzerland. DeAngelo & Gary & Gary are team number two. Will & James make a rookie mistake and don’t read the clue in its entirety and fail to hook up the horn, which sets them behind and other teams move ahead. Riley & Madison are team number three. Eswar & Aparna are team number four.