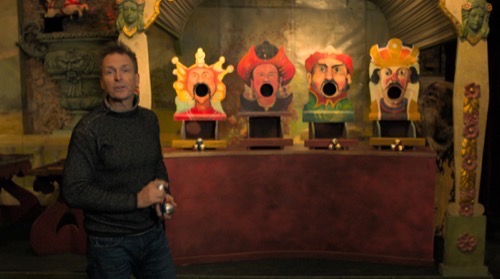 Tonight the CBS series The Amazing Race airs with an all-new Wednesday, November 11, 2020, season 32 episode 5 and we have your The Amazing Race recap below. In tonight’s season, 32 episode 5 called, “You Don’t Strike Me As A Renaissance Man” as per the CBS synopsis, “Teams are in Paris, France where they must whip up some tasty treats and make enough Crème Chantilly for four pies, as well as compete in a series of carnival games.”

Will & James are the first fly six thousand miles to Paris, France, and need to find the Domaine de Chantilly in Chantilly, France where they will find their first clue. They believe it is going to be a stick shift in France, but neither are worried because they know how to drive it.

Michelle & Victoria were never close when they were young and now they are getting closer, the race is good for them. Leo & Alana are on their way, the last time Alana was there she had a crush on a guy named Stephen. Riley & Maddison are also aware of the stick shift and are not worried. Eswar thought this show would showcase his strength, but he feels it is more showing his weaknesses.

Once in Paris, Riley & Maddison are confident that there will be at least one team that doesn’t know how to drive a stick. Will & James are the team to have the problem, Leo gets out of his car to help them, even though they were u-turned by them.

Riley & Maddison are the first team to arrive and it is a Road Block, “who has an eye for art?” They must match up people in the paintings with real live people who show up at a party inside the Domaine de Chantilly. There are nine party-goers who match nine paintings in every detail. Riley goes in, he has great attention to detail. Once he finds a party goer that matches the painting, he must give them the name of the artist who did the painting.

Riley does it, he gets his clue. Next, they must travel on foot to Cream of the Crop, teams must whip some Chantilly cream and fill up four pies. Meanwhile, a lot of the teams are having problems with the stick shift, and the others are lost.

Riley & Maddison are whipping cream, while Alana is trying to find one of the party-goers who match a painting. Teams are hoping that Will & James are still trying to get up the exit ramp at the airport, but that is not the case, they are the third team to arrive at the museum. Alana did it, she is done.

Making the cream is not as easy as it looks, teams are finding it very hard to do it manually with a whisk. Hung & Chee are in fourth place and have just arrived at the museum. James is done, he and Will are on their way to make the cream.

Will & James have finished their pies and deliver them, but once they enter a tent, there are other chefs throwing pies at them trying to make them drop theirs and not deliver them. They make it, teams must now make the one hour drive back to Paris to Musee des Arts Forains where they will receive their next clue.

Michelle & Victoria are off to making cream while Leo & Alana deliver theirs. Hung & Chee deliver their pies and almost drop them.

It’s a Double Roadblock, “who wants to step right up?” it’s carnival games and teams must win all three to win their next clue. Maddison is not having to throw balls into a hole, Riley is shaking his head because he plays darts and this would have been so easy for him. Riley says it is going to be embarrassing if Maddison can’t win a few carnival games.

Since Kaylynne & Haley arrived last in the last non-elimination leg, they have to complete a Speed Bump called “hold your horses,” they must clean up riding gear for two drivers.

DeAngelo & Gary are done at the museum, Aparna is on her 7th attempt and just once to be dome with this challenge.

Riley & Maddison are team number one at the Pit Stop and have won a trip to Vietnam. This means a lot to the two, now they know they can do it and make it to the finals. Meanwhile, Chee passes Leo at the carnival, and he and Hung are headed to the Pit Stop.

Hung & Chee are team number two at the Pit Stop, Leo & Alana are third. Will & James are in fourth place, and Phil jokingly says they are going to revoke their licenses for not knowing how to drive a stick shift. DeAngelo & Gary are in fifth place. Eswar & Aparna are in sixth place. Michelle & Victoria are lost, Kaylynne and Haley are team number seven.

Michelle & Victoria are the last team to arrive at the carnival games, once done, they make their way to the Pit Stop and arrive in last place.