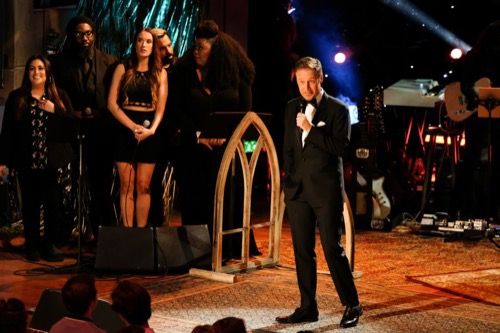 The Bachelor Listen To Your Heart airs on ABC this evening with an all-new Monday, May 18, 2020, season 1 episode 5 and we have your The Bachelor Listen To your Heart recap below. On tonight’s The Bachelor Listen To Your Heart season 1 episode 6 “Finale,”  as per the ABC synopsis, “In what will be the biggest moment of the competition, each couple will perform two songs before a packed house and the panel of celebrity judges, including one of Bachelor Nation’s most popular couples, Kaitlyn Bristowe and Jason Tartick; Broadway, film and television star Taye Diggs; actress, singer-songwriter and movie producer Rita Wilson; and multiplatinum recording artist Jewel.

Love songs made popular by the Righteous Brothers, Dan + Shay, Ed Sheeran, and Bob Dylan help the talented twosomes express their feelings for each other. All are hoping to create a magical moment on stage for the judges. In the first rose ceremony in Bachelor franchise history in front of a sold-out audience, which the couple walks away with their hearts’ desire and dreams fulfilled?”

Chris starts the episode by welcoming everyone to Nashville, Tennessee. Each couple will perform two songs together. But before we get to the performances, Chris is giving everyone time to work on their relationships. Each couple will go on one final date before their final performance. At the end of the date, there will be a fantasy suite card; they will have a chance to forgo their individual rooms and spend time together in the fantasy suite.

The Hermitage in Nashville is amazing, the ultimate luxury and an amazing place to end this journey. There is a knock on the door, everyone gets their cards with their songs. Rudi is trying to enjoy being around everyone, but Matt stressing is really pushing her over the edge.

Bri and Chris are going over the words to their songs. Matt is walking through the halls, still having a hard time. Matt returns to see Rudi in bed, he asks her if she wants to sit on the couch to talk. She asks where his head is at. He says getting to know her and how far they have come, has been such an amazing experience. And, getting to sing with her has been the best most magical experience of his life.

But, after hearing all the stuff from Chris Harrison, seeing Bri and Chris, where they are at, it’s hard for him to say that they can go up there and be at the same level that they are at with their relationship. He feels like an idiot because he just can’t get where those guys are at and he doesn’t want anything disingenuous. He doesn’t want her to resent him.

She is upset with him, she tells him that she didn’t need to waste her time and go to Nashville, she could be with her family. She is crying, she gets up and leaves the room, slams the doors behind her. He goes to see her, she tells him that she has nothing to say. He hugs her and tells her that he cares about her and enjoys making music with her. He says they will be bonded for the rest of their lives and he cares about her.

Matt and Rudi decide to leave the show; they tell the other couples. Matt walks Rudi to a car that will take her away, he hopes he made the right decision.

Trevor and Jamie are talking, he says the moment he met her he knew that he didn’t want to get to know anyone else. And, he loves performing with her and see how strong she has gotten on stage. Jamie is feeling so good, she loves that Trevor sees her for who she is. Jamie pulls out the fantasy suite card and key. They both agree to use the key and tell each other that they are falling more and more, deeper and deeper in love. He tells her that he is not stressed about the performance because he feels like he already won, because he has her.

Bri is getting ready, she is excited for her date with him. She feels they are solid, but that worries her because, in past relationships, something has always gone wrong. The two meet for dinner, it’s a private table for two. She asks him where he sees them after tomorrow, he says creating a life together. He tells her that she is his future. They tell each other they love one another. Chris gives Bri the fantasy suite card, she reads it. She tells him that because of past things, she is not in a rush to do anything.

She would rather wait and make sure it happens at the right time. Chris says that what has gotten in the way of all his relationships, is accelerating too fast on a physical front. Once again, he is happy that they are both on the same page. She says she does feel like he loves her for her, and she is happy about that. He walks her to her room. She is relieved that the two of them have talked. She feels like she is in such a good place with Chris, and she doesn’t want anything to compromise that.

Bri and Chris are at rehearsal and not doing that well. Bri thinks something changed between her and Chris this morning. Meanwhile, Jamie and Trevor couldn’t be closer, they had a great night and both are in an amazing mood today.

Bri is hoping she and Chris sing their songs their best, in one performance, their lives could be changed forever.

Time for the performance, Chris comes to the station and says hello to everyone. A packed house tonight, the stakes could not be higher. They have a chance to work with a noted producer, create original music, a record that music, and travel together on a tour sharing their musical and romantic connection. They are performing two songs; the judges tonight are Bachelor royalty, Kaitlyn Bristowe, and Jason Tardiff, Taye Diggs, Jewel, and Rita Wilson. Rita tells the couples they have to strip naked emotionally, make beautiful musical intercourse, and lead with the song Baby.

Jewel says the thing she really likes about music is that nobody cares how perfect you are, they just want to see your heart and your sincerity. Chris tells the judges that they have a huge responsibility here tonight. Their decision and their decision alone will decide the winning couple. Trevor just wants Jamie to shine in front of the world, he is really excited. Jamie can’t believe this is happening, she used to be this scared little girl writing songs in her room.

Jamie and Trevor are first, they start with singing, “Unchained Melody,” then follow with “Speechless.”

Judges Comments: Rita: “I really think you guys are unbelievably sweet together and I have to say that we are in a city that is known for great country duos. I really felt that your voices blended beautiful and you were very connected. It will be interesting to see where this journey takes you.” Taye: “You two are adorable. Thank you, you should be proud. You look good together and I believe you are both into each other, so much so, that your nerves told you, and you were leaning a little too much on each other.” Kaitlyn: “I have a question – did you too do fantasy suite.? I was going to say they have either been there or are going there.” Jason: “I noticed Trevor that with your body language, you leaned on her. To me, that was so impressive and says something about your relationship.” Jewel: “This is so hard, I can’t imagine going through this experience. Seeing your energy, spirit, and what you about make me almost want to cry.”

Bri and Chris first sing, “Make You Feel My Love,” and end off with “Give Me Love.”

Judges Comments: Rita: “You said something that I think is really important and that is that you have the right partner, and you two have a clear connection that I thought was so beautiful, and it was very calm and very centered, which I thought was extraordinary given the circumstances that you are having to perform in tonight. There was a certain confidence in your performance, I really believed you, I thought you did really well tonight.” Taye: “You guys are a beautiful couple, you sing beautifully together and I believed everything. I would pay money to see you guys and I don’t even know you. You two should be very proud. I could see a moment where you both had nerves and then when you connected, I could tell that you two were calming each other.”

Jewel: “You both are a beautiful couple and your connection does feel genuine and you don’t feel nervous about it, it does have a calm and settled feeling. Bri when I am watching you sing, all your energy is in your face, but the rest of your body had little energy to give. The harmonies are beautiful when you sing together.” Jason: “Honestly, it is time for the world to see you two, you have so much to show and give.”

The judges leave the stage to deliberate and choose who they want to win.

There is a lot riding on the judge’s decisions. The two couples return to the stage.

The winning couple is Chris & Bri.