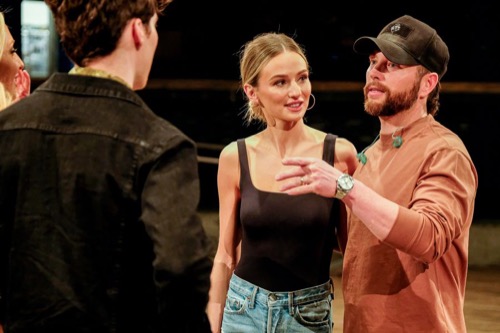 If a couple cannot see their future together, they must say their goodbyes before the competition begins. Now, receiving a rose no longer just means having a romantic connection”

Gabe is feeling good, just trying to process everything. There are some couples, but for him, he still hasn’t found a real connection. Sheridan had a connection with Julia, he can’t imagine her connecting with anyone else like she does with him and hopes it continues to be amazing. Brandon is evenly split over two women who he thinks are equally incredible. He speaks to Julia and tells her that he wants to also pursue something with her to see if there is something there.

Chris walks in and tells everyone loves comes first, music later. There will be no more new arrivals and it is time to have a long hard talk with the person you are connected with. Is there a person you gave a rose to the person you want to be with long term. The next time he sees them, he only wants to see couples who are serious together. And, if they haven’t found a connection, he would want them to respectfully leave.

About half the couples look serious about taking it to the next step. Jamie is thrilled she has Trevor and believes they have a future. Gabe feels like he can move forward with Savannah so he is just going to put it out there.

Julia tells the girls that it was tough, listening to Chris Harrison because even though she has a connection with Sheridan, she also has one with Brandon. This concerns Savannah, she thought she was all in with Brandon. Julia sees that and says maybe she shouldn’t have said anything. Now Savannah is really concerned, is Brandon really after Julia? Is he not the person that Savannah thought he was? Gabe goes outside to speak to Savannah, he says he is going to throw her a curveball. He tells her that he only feels comfortable with her. She tells him that she has a friendship spark with him, but not a romantic one. He thanks her for being honest, he knows it was tough, they hug.

Gabe sits down with Ruby, tells her that his heart is with someone else and he needs to go. Gabe goes to tell the men, hugs all around, and he leaves. Ruby, on the other hand, doesn’t feel like she was given a fair chance.

Savannah is crying, Gabe leaves. Matt thinks this situation sucks for Savannah. Brandon goes to see Savannah, she tells him what Julia told her. He says he thought things had fizzled out between him and Julia, and when she did that, it brought out questions within him. But, he would like to continue this journey with her, not with Julia. He asks her if she wants to do this, or does she want to go home and cry. The two hug each other.

Brandon tells Sheridan about his conversation with Savannah, he says full steam ahead.

The women are sitting together, Savannah walks in just as they are talking about her and Brandon.

Sheridan goes to see Julia, she is crying and tells him that she is just trying to process everything.

Chris is back, he says it is good to see this many couples together. Each of them, as couples, are going to have an amazing opportunity to get closer together by singing music together. Each couple is going to be given a song. They are to perform with a band, on stage, live audience, and panel of judges from the music industry and former Bachelor couples. The judges will decide who stays and who goes. And that couple will be the best performers and the most committed. They will work together with a noted producer, write and sing their own songs and go on tour. This is their opportunity to get it all, no pressure. Their song assignments will be waiting for them.

Julia is so not into this, she is sitting with Sheridan and barely singing. All she can do is look over at Savannah and Brandon. It is 100% clear that Julia is not into Sheridan and should have gone home and not stayed to get her fifteen minutes of fame, it’s not fair to Sheridan.

Bri walks in and she has a date card, it is for Bekha and Danny, “to be your best, you need to look your best.” This is the first couple date card. Danny and Bekha kissed on their first date, and she believes they just need to find their groove again. They enter a house, and there are clothes and shoes everywhere. Rebecca Mink from SylistMink Shoes walks in, she says the first thing they are going to is to choose what they gravitate to first. And then she is going to take it to the next level. Back at the mansion, Brandon is all over Savannah and Julia just can’t take it.

Danny and Bekah take it to the pool with champagne, the two kiss and she tells him that it just takes her a while where she gets to that place. She just can’t feel things very quickly.

Julia is still crying over Brandon and Julia, she can’t process the two together and it is driving her nuts. Sheridan is watching her, wonder what he is thinking.

Julia sits down with Savannah and tells her that her relationship with Brandon doesn’t sit with her well like it’s not genuine. Savannah says that it is alarming that her relationship with Brandon is bothering her so much. Julia says the PDA was turned up 100% and it looks disingenuous. Julia thinks she is the one being attacked, and she has no feelings for Brandon. Savannah doesn’t believe her, she thinks is just catty and jealous.

Natascha and Ryan got a date card, they just got to the House of Blues, Chris Lane is singing and his wife Lauren is there. Chris tells Ryan he looks like Shawn Mendez. They stay for the concert, Ryan and Natascha are both vibing. Natascha feels like she and Ryan can become even more connected, and so does Ryan.

Rudi is stressed, she finds the other couples have an advantage of her and Matt, they never even went on a date yet.

Time for everyone to perform live. The celebrity judges are looking for overall chemistry and musical performance. Here are the judges: Jojo and Jordan, Jason Miraz, and Kesha. The judges will decide which couple is going home.

Rudi and Matt are first, they are singing, “Fallin’ All In You,” by Shawn Mendes.

Judges Comments: Jason: “Rudi you were amazing, Matt you did a good job holding it down. In the relationship sense, I feel like you are still getting to know each other, great job.” Jojo: “Rudi I was feeling that I think you both enjoy each other, I don’t know where that is going to go, but I enjoyed that performance.” Kesha: “That was an amazing performance and just continue to let each other shine where you can.”

Bri and Chris are singing, “Beyond,” by Leon Bridges.

Judges Comments: Jojo: “You did not take your eyes off of her and it was the most beautiful genuine thing I have ever seen, it did not look forced at all.” Jordan: “The way he looks at you, you can’t fake that, you can’t make that up.” Jason: “Chris you are so grounded from the start, gorgeous, calm. Bri it looked like you are in love with him and the audience.” Kesha asks how they feel about each other. Bri says he has been her rock and he grounds her, he is everything and she really is falling in love with him. Chris kisses her on the forehead.

Bekah and Danny are singing, “Ho Hey,” by the Lumineers.

Judges Comments: JoJo: “I feel like there is a strong friendship between the two of you right now.” Jason: “I think the bridge was a little shaky in your harmony, in a relationship since I think you are still getting to know each other.” Kesha: “I will agree with you guys, I think romantically you are going to have to feel this one out.”

Savannah and Brandon are singing, “I Want You To Want Me,” by Cheap Trick.

Judges Comments: Jordan: “I felt it was really intimate and it started that way, but Savannah you kept pulling away a bit. I feel like Brandon was trying to lock the eyes, I felt more chemistry afterward.” Jojo: “I felt it is straight on only.” Kesha: “I don’t know what is going on romantically, it looks like you are close and supportive.”

Julia and Sheridan are singing, “As Long As You Love Me,” from the Backstreet Boys.

Judges Comments: Jojo: “You were loving it and having fun up there and that makes us feel good watching you. I loved how Sheridan was locked in on Julia and I loved that.” Kesha: “I feel like Sheridan has love in his eyeballs.” Jason: “I was feeling a Kenny and Dolly thing happening between you two, or Trisha and Garth.”

Natascha and Ryan are singing “Stay,” by Rihanna.

Judges Comments: Jason: “Natascha you have tremendous power and control in your voice, Ryan you are great too, but Natascha is soaring all around you and her career could take off.” Jojo: “I loved that, it was hot and sexy. There was a calm about it too.” Kesha: “Honestly, I want to tell you both that it was a terrific job.”

Jamie and Trevor are last, they are singing, “I Could Use A Love Song,” by Maren Morris.

Judges Comments: Jojo: “I think every girl kind of relates to you, it was so sweet and beautiful. It felt so real, nothing about that felt forced. You sound so good together.” Jason: “I think all couples, as a couple, have the chance to inspire the world that they are sharing with each other. You demonstrated so much vulnerability in that performance, it was beautiful to watch.” Kesha: “I want to give you so much love, you should feel so proud of yourself right now.”

Tonight the couples are going to the Rose Ceremony as couples. This ceremony is very different, for the first time, judges will be making the decision on who will be getting these roses. There are seven couples, one will be going home. Chris gives the first roses to Jamie and Trevor, then Natascha and Ryan, Matt and Rudi, Bri and Chris, Julia and Sheridan, Savannah, and Brandon.

Bekah and Danny are going home.