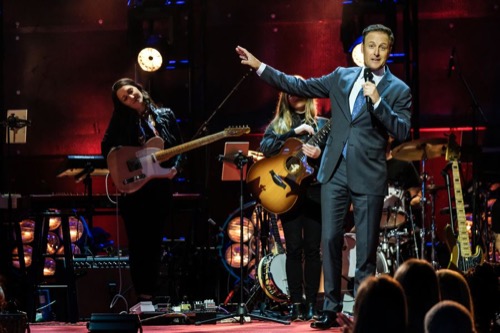 he drama reaches epic proportions before the couples prepare to hit the stage again with celebrity judges ready to weigh in on their musical talent and the chemistry expressed in their performances.”

Savannah really believes in her and Brandon’s performance and she loves how the relationship is progressing. Sheridan is feeling good about he and Julia and believes they are the best duo that they can be.

Chris Harrison drops by the mansion, he tells them he knows it was tough last night but the right couple went home, there was no chemistry. He says that if they learned anything, its that chemistry and relationships are what matters. It is what truly propels their music to the next level and that is why he is there this morning. Chris says that some of them may have realized that the chemistry is not perfect and maybe this is not the best partnership for them. So today, they are going to be challenged, they are going on dates, but with who they think it will be with. Chris is going to test these relationships and in some ways, it may strengthen them. But, at the end of this journey, they need to know if that last couple standing is committed in music and in love, that is why they are doing this.

The dates are Jamie and Ryan, Chris and Rudy, Julia, and Brandon. There are a lot of sad faces, and a few ticked off ones. Savannah is a little worried about Brandon, but maybe he can hash things out and bury things with Julia. Sheridan is not super excited. Julia tells Sheridan that she doesn’t think this will change anything between them. You can tell that Julia is lying, she is so looking forward to having a date with Brandon, she has had the hots for him since he walked in the door.

Julia and Brandon leave for their date, then Rudy and Chris.

Rudy and Chris are having a picnic, he tells her that he has fallen for Bri – he doesn’t want to run out and chase a whole bunch of women. Rudy has binoculars and she is trying to see if she can see someone with Matt. Rudy is happy that she has another friend in Chris.

Ryan and Jamie have a spa day and they both are friends.

Julia and Brandon are at the Roxy, they are writing a song together with Joel Krauss. Joel says they both seem to have this vibe and connection. Meanwhile, Sheridan is writing a song on his own, back at the mansion, for Julia.

Sheridan thinks he could be gone tomorrow, he is bracing himself for the worse, but he hopes Julia comes back to him and finds closure with Brandon. Chris and Rudy are back from their date, everyone is in good spirits. Savannah is really worried, she feels connected to Brandon but she knows that Julia is attracted to him. Ryan and Jamie return, but no sign of Brandon and Julia.

At the Roxy, Julia and Brandon are on stage singing their song that they wrote. Singing together, Julia realizes she is falling for Brandon, they sit on a couch and they kiss and Julia now wants to end up with Brandon. Back at the mansion, Sheridan says he is looking for clarity. Sheridan says he is hopeful. Outside, Brandon hugs and kisses Julia and says they obviously have conversations that need to happen; she has no regrets. Julia enters the living room and she asks Sheridan to go talk with her. The couples in the living don’t think that that will be a positive conversation.

Julia starts by telling Sheridan she is sorry, she says she found out what she needed to know. Sheridan is sitting there with a blank on his face. Julia starts crying and tells him that it is so hard and she doesn’t know what to do. She then says that she doesn’t think she can do this with him, he wishes her the best with Brandon and walks away. She is shocked that he got up, he asks her what else can he do. He says he has done his best, he put himself out there and obviously it is not enough. Sheridan says goodbye to the other couples, Bri tells him that he is amazing. Everyone feels bad for him because he is such a nice guy. Sheridan was looking for someone he could connect with, and obviously Julia is not the one. Sheridan says that there must be something wrong with him when he is consistently not enough. Very sad.

Brandon takes Savannah off for a talk. He says he was trying hard to be pleasant with her. He says she has feelings for him, he thinks he has feelings for her. She says all day she was so confident because he gave her his word. He tells her that he feels like she is 95% in with him, but the 5% that does not scare the crap out of him. She says she doesn’t feel chosen. She asks if they are doing something, or is he and Julia. He doesn’t answer, so she says she is done. Brandon is upset too, he follows Savannah outside, he wants to work it out with her. Julia overhears.

He asks Savannah what he has to do to step up. She says she wants a definitive answer of where he is with Julia. He says he is willing to make a decision now to work this out with her. She tells him that she doesn’t trust him and she is not going to be a second choice. The whole time, Julia is listening in. Savannah walks into the living and tells everyone that it is her time to go. She goes to leave, gets in the car. Brandon goes to see Julia and they hug. Savannah says that she didn’t think this would happen – but she wants the kind of love that is going to keep you up at night.

There are only five couples left, four are solid. Julia says that she finally has a sense of peace, she feels relieved that she was able to figure out what she needed. Chris Harrison arrives at the mansion, he says the last couple of days were a necessary exercise. Chris tells Julia that she paid the ultimate lesson in finding her path. On to this week’s performances, they will be perming at the Novo in Los Angeles, a bigger venue, a larger audience, and different judges.

Jamie and Trevor’s song assignment is “Like I Am Going To Lose You,” by Meghan Trainor and John Legend. Bri & Chris get “Lover” by Taylor Swift. Rudy and Matt get “Tennessee Whiskey,” by Chris Stapleton. Julia and Brandon get “We Belong,” by Pat Benatar. Natasha and Ryan get “You Are The Best Thing,” by Ray LaMontagne

Natascha asks Brandon what he would have done if Savannah had said she was in it with him yesterday, I’m not going anywhere I want to be with you. Brandon nods a yes indicating that he would have chosen her, while Julia is sitting right beside him. Natascha thinks Brandon is a no-good player. Natascha thinks Julia needs to know the truth and she waits until the concert to tell her before she gets up and performs on stage with Brandon.

Julia thinks Natascha doesn’t care about anyone else, why would she be so manipulative to tell her before the performance. Julia goes straight to Brandon and tells him what Natascha said. He claims to have not said definitively that he would have taken Savannah over her, but he is glad that he is with her.

The judges are Rachel Lindsay and her husband Brian. Andy Grammer, and Toni Braxton. The one couple who they don’t see having a connection will be going home.

Rudy and Matt – Judges Comments: Rachel: “We looked at each other and had a moment. You guys were so good, your chemistry was great. You guys looked like you are having so much fun together and that is as it should be.” Andy: “That was pressure and you both let go of it and had a good time, that was hard. Strong vocals were really really good. You both were a little nervous, but for the most part, it was hell ya.” Toni: “I wanted you to play that guitar like you were playing her. It was fantastic and I loved it, but I wanted to be uncomfortable, get a room.”

Trevor and Jamie – Judges Comments: Andy: “About the first half it was just a lot of nerves and that affected some of the notes. About the third quarter, it sounded really good to me so keep rocking.” Rachel: “The only thing I wish Trevor from you is that you would have matched her passion a bit. She was all in with you and you were cool, calm, and collective.” Toni: “I understand you are nervous but don’t be, you are here, you got yourself on that stage, you got your guy who is going to support. You are a beautiful woman, are need to sing like you wear that dress.”

Chris and Bri – Judges Comments: Toni: “That is what I am talking about. I was feeling it, I was uncomfortable, I see love, I feel a connection.” Rachel: “We were having a conversation how do you sing and show you are in love at the same time, that is exactly how you do it. You both were singing to each other like nobody else was in the audience.” Andy: “Your falsetto is really special my man, you have a lot of power, you guys are fantastic.” They both say they love each other on stage. He so wishes his dad was there to meet him, he thinks she is perfect for him.

Brandon and Julia – Judges Comments: Rachel: “I am kind of glad that we got the background that you are a new couple because I could feel that in the performance, it seemed a little disjointed as far as the connection was concerned. It felt more like a karaoke performance more than you were both into each other.” Andy: “We don’t know if you are both into each other but there is something kind of sweet about the two of you pushing through it.” Toni: “I am glad you mentioned the back story because I kind thought the two of you were having a fight and he was kind of trying to make up with you on stage. There was tension, but you both are talented.”

Natascha and Ryan – Judges Comments: Toni: “Beautiful voices, super talented. You engaged the entire audience, we were all up there with you.” Andy: “Your voice is unbelievable my dear, freaking crazy and amazing. I was really impressed by both of you, awesome.” Toni: “It was so good, I felt like I had a sneak peek into your relationship, it was so sexy.”

Jamie calls Natascha out in front of everyone, Natascha says she was being a friend, Jamie says she was dirty and slimy.
Time for the Rose Ceremony. The roses got to Chris & Bri, Rudy & Matt, Ryan & Natascha, Jamie & Trevor.