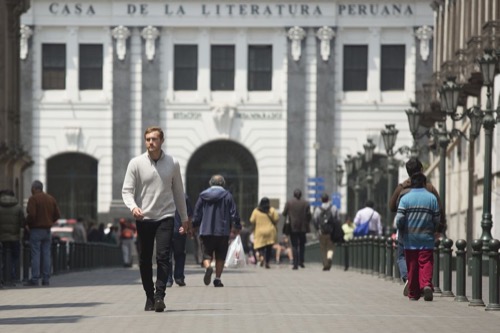 The Bachelor 2020 airs on ABC this evening with an all-new Monday, February 10, 2020, season 24 episode 7 and we have your The Bachelor recap below. On tonight’s The Bachelor season 24 episode 7 as per the ABC synopsis, “The pressure mounts as hometown dates loom, but first Peter and the remaining six women travel to beautiful Lima. After a supportive conversation with his mom, Peter is inspired to pay the women a surprise visit for a serious chat.”

In tonight’s episode of The Bachelor the women just arrived in Lima Peru, Hannah Ann is looking forward to advancing her connection with Peter. Kelly is happy to be in Peru and hopes she will see an alpaca. Peter facetime’s his mother and tells her that he is down to the final six, and the week before was one of the toughest weeks. His mother tells him to just believe in his heart.

Peter drops in to see the women unexpectantly. He tells them that the last rose ceremony made him think that he is worried that he gets to the end and he cares for someone that doesn’t care for him. He just wants them to be honest with themselves and with him.

A date card arrives, it is for Madison, “I think you’re a catch,” Peter. She is really excited and can’t wait to see what they are catching. They go to explore a small fishing village and Peter is having the time of his life, being with Madison is like being with his best friend. He loves being tangled up with her, it feels so good when they are together. They toast to their second amazing date on a boat. Madison tells Peter that she doesn’t want him to doubt anything with her.

Madison is very religious and that is something that is important to her. So, during dinner, it will not just be Peter that has questions this time. She hasn’t had a ton of conversations with Peter about her faith, and it is time for her to bring it up.

Meanwhile, Madison is wanting Peter to meet her family and is hoping her name is on the next date card. Luck has it, Madison gets the one on one date, it is her time to shine. She is excited to see him and have him all to herself.

Madison does see Peter as someone she can spend the rest of her life with and plans to be fully honest with him over dinner. Its time, Madison tells him that faith is her whole life and she wants a marriage where her spouse also has a relationship with the Lord. Peter tells her that he was raised in a Christian household and he knows that sometimes his faith could be stronger. Furthermore, he knows that he is falling in love with her. Madison is on cloud nine, all she wanted was someone who was real and valued the same things that she does.

It is time for Madison’s date, Peter tells her that they are going to explore Lima together. Madison is hoping that the day is going to secure their relationship. Meanwhile, Kelsey doesn’t want Madison to return to the apartment, that would mean one less rose.

Peter tells Madison that she has shown more sides to him than any of the other women, and he loves how honest she is. Madison says that her parents haven’t met a guy that she dated In four years, the last guy said that she was too intense for him. Peter says it is a beautiful process, what they are going through, he respects her and wants to enjoy the day with her. Madison is hoping that she is the one for Peter.

Another date card has arrived, this one is for Kelsey, “love is a wild ride,” Peter.

During dinner, the conversation seems a little awkward, but Peter tells her that he can really see something special in her and she would be a good match for him. She says she feels like she wants it to continue.

Back at the apartment, the women agree that they don’t think that they could have survived in Natasha’s shoes, she has waited so long for a one on one.

Natasha says that if they were to end up together, has he thought about that. He says right now he just focusing on finding the person that he wants to spend the rest of his life with. Peter thinks Natasha has a lot of qualities that he loves, but it feels more like friendship. He owes it to himself and to Natasha to be brutally honest. He tells her that he can’t give her the rose because of where he is with his other relationships. Natasha says it is too bad. Peter tells her that he knows what she has to offer and maybe he waited too long to see what that was.

Peter feels so bad sending her home, but he walks her out. He can’t force anything if it is not there right now, he is too far in this journey, he needs to be brutally honest with himself. He doesn’t think that Natasha could catch up with the other women at this point. Natasha is in the car leaving, she realizes that they were not on the same page. Peter is just going to continue following his heart and be honest.

Kelsey is worried, Natasha is sent home – reality sets in, it’s a wakeup call. There is still one girl being sent home and that could be her, and it scares her. Time for Kelsey’s date with Peter, he welcomes her to the countryside of Peru. Peter is eager to have their date but he is not sure if he can fall in love with Kelsey and hopes that this date will give him clarity. Kelsey on the other is super excited, they are going to drive ATVs through the countryside. Peter loves exploring and getting lost. The two climb a mountain to get to the very top.

Peter tells her that he likes adventure, he just needs to get in better shape. He asks her if she remembers a conversation they had about the family, she didn’t answer the question. She says she would love to work part-time and be home to be involved in their kid’s lives. The two have a wonderful day, it’s time for dinner. Peter acknowledges that they had a fun day, he enjoyed it. They start to talk about the upcoming week, Peter wants to know more about her family. She says her mom is very sweet, she will probably bake cookies.

Her dad will not be there, and that is ok. Her parents got a divorce when she was in seventh grade. He tried to reunite with her, but there were too many red flags. She says she wants to give her father a second chance, maybe have a relationship with him, Peter loves that, he thinks it is honorable that she wants to give her dad a second chance. She tells him that there are a lot of qualities in him that’s she is looking for, and she is scared. Peter says he appreciates their relationship, it is their own, it is not the standard relationship, but they are doing it their way – and he can definitely see himself going home to see her family. Peter says he is very excited about them, he offers her the rose.

A date card arrives, Hannah Ann, Victoria, and Kelley, “tomorrow won’t be easy,” Peter. The three women are ready for their date and neither one of them looks thrilled. First, Peter spends time with Hannah Ann. She wrote the reasons why she is starting to fall for him; he makes time for her, he makes her feel like the only girl there, he makes her feel beautiful, he brings out the goofy side of her, he makes her feel that she doesn’t have to be perfect., etc. Peter says it is the sweetest thing ever. Victoria is frustrated, she walks away from Kelley who lays down on one of the chairs and laughs about the whole thing.

Kelley is confident about her relationship with Peter, she believes he knows she has a good head on her shoulders. Peter sits down with her and asks her how she is doing. Kelley says she was a little frustrated that she didn’t get a second one on one date. She goes on to say that she would love if he met her family. Kelley is giggling and laughing, says it is fun – he doesn’t like that she is laughing.

Peter then goes to speak to Hannah Ann. He tells her that he knows that they have had some stuff in the past, there have been doubts and he is really confused. He really wants to know what she makes of the last date. She says it is extremely frustrating, she doesn’t understand why every time they are together, he is in a mood. Peter says he doesn’t like that she is attacking him, and she has given him reasons to doubt their relationship. He says there are doubts because she always pushes him away. She says essentially, she doesn’t want to get to the end and lose him. Afterward, Hannah Ann is mortified by their conversation.

Kelsey is so confident, she says she is an attorney, its easy, the other girls are nothing. Peter returns to the girls, he says this will be it today, he doesn’t need dinner. Peter asks Victoria if they can go talk, Kelsey is smirking. Peter tells Victoria that he really appreciated what they had, and he wants to continue their journey, he asks her to accept a rose. Victoria kisses him and tells him that she is so excited. Going to home towns, Peter is excited to spend time with Victoria. Peter returns to Hannah Ann and Kelley. He tells them that he gave the rose to Victoria. Peter tells Hannah Ann that he has enjoyed her sweet nature, and enjoyed every moment up to this point. Peter then tells Kelley that he is excited about their relationship and doesn’t know why they met the way they did, but he is grateful that he did. Peter give the rose to Hannah Ann. Wow, Kelly is going home, and rightfully so after everything she said about the other girls.

Peter walks Kelley out, he says he was holding on to why they came into each other’s lives. Kelley gets in the car, she doesn’t shed a tear. Peter knows that he made the right decision today, Kelley and he had a good friendship, but not a relationship. Kelley doesn’t agree with Peter’s decision and questions his intentions. She calls the remainder of the women, little babies. Meanwhile, Peter opens a bottle of champagne and shares it with the final four women.