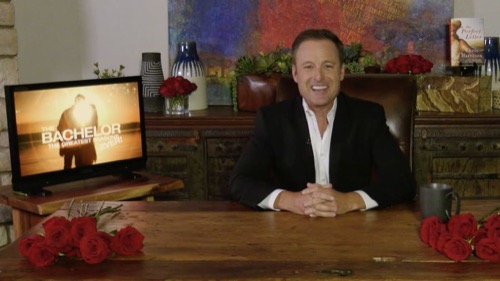 Tonight’s The Bachelor: The Greatest Seasons – Ever! Recap begins now – Refresh Page often to get the most current updates!

Tonight we get to go back to Kaitlyn Bristowe’s season of the Bachelorette. Chris is back at his house with his one-man crew, his son Joshua. Kaitlyn’s journey was so scandalous, Chris wasn’t sure if he could show it again. But first, we go back to the beginning.

Kaitlyn’s nerves are out of control, this is the biggest night of her life. But, first, she has a little competition. Britt Nilsson will compete against Kaitlyn to be voted in by the men and continue on this journey. Brady is the first guy out of the limousine. Shawn B. decides just to take a double hug. Chris arrives in a cupcake mobile. And on and on more men arrive. Once inside the mansion, the girls try to get the men’s time rather than the other way around. In the end, Kaitlyn is picked, Britt is sent home. Kaitlyn is excited, she hugs Chris when she finds out that she is staying. What a nice person, her first concern was for Britt.

Kaitlyn gets to meet Amy Schumer as part of one of her dates, and she is thrilled.

On one of the group dates, all the men gear up for some sumo wrestling, then in sombreros for some singing; essentially they will do what it takes to put themselves out there for Kaitlyn. Next, Kaitlyn takes some of the men to a sex education class in school and they do pretty well considering that Kaitlyn’s pranks them with a couple of tough questions. Ben H. was pretty much the best one, he stood out and Kaitlyn loves it.

Chris checks in with Ben Higgins today at home, he says the sex education class was terrifying, it made him nervous to do it on national television. He remembers a lot of being on the show, and it helped him to enhance his life. His advice to Claire is to not do your injustice of not being yourself. He knows everyone who is going to walk out of that limo for her and he is excited for it starts.

Time for another group date, Ben Z. shows off his muscles, Kaitlyn is really attracted to him and there is this comfortable energy between them. When they are alone, he tells her about a time when his mom fell down the stairs and broke her back, they found out she had cancer, she passed away when he was thirteen. Next is Jared, Kaitlyn really felt a connection with him. Every minute she spends with Jared, she finds that she is getting closer to him. He is someone that she did connect with.

Jared did have one of the closest relationships with Kaitlyn but sadly was blindsided just before the fantasy suites. Thankfully Jared has found love with another Bachelor alumni, Ashley Iaconetti. Chris joins them at home for a video call. This is their first anniversary of when they met, five years ago. The two combined have been on six seasons of the Bachelor franchise. Jared and Ashley support Claire as the Bachelorette.

Time for the biggest bad boys from Kaitlyn’s season. Joshua offered for Kaitlyn to give him a haircut and she gave him a half mohawk cut. Clint drew her portrait of Chris riding a triceratops, then he got himself a one on one date; they both jumped into a pool fully clothed. Later that evening, he ignores her and she calls him out on it. Meanwhile, there is a bromance going on between Clint and JJ. A lot of the guys are annoyed with the two of them because they seclude themselves from everyone else and do weird stuff.

Just before the rose ceremony, Clint takes Kaitlyn to the side and kisses her to try to get himself a rose. Thirteen of the men tell her about the Client, she calls him out before the ceremony. She tells him that she doesn’t trust him and he needs to leave. JJ turned on Clint and told him that he should apologize to everyone for taking time at the rose ceremony with all the drama. Clint basically tells JJ off and leaves. And, the mother men lose respect for JJ because he threw Clint under the bus.

Hannah Ann and Madison join Chris, Hannah Ann say that she has moved on. Madison says that she and Kelly were close to the show and she is happy that Peter found the person who makes him happy. She has no hard feelings towards Barb, she was a mother protecting and looking out for her son’s best interest. Chris asks if they are good friends, they say yes, they have come close from being on the show. Both are still single.

For Shawn B. it was love at first sight when he got out of the limo, Kaitlyn had butterflies early on as well. Kissing Shawn, she just felt good and never felt that kind of immediate attention to anyone. He tells her about a bad car accident he was in five years ago. Kaitlyn loves that Shawn is opening up to her, in fact, he told her that he was falling in love with her. Shawn feels that everything that he has done has led him to this moment, it was meant to be.

We look back at a group date with the men, it’s a rapping contest and who does Kaitlyn see, Nick, he is from Andi Dorfman’s season. Kaitlyn is shocked, it’s week four and he definitely needs to think about this. Nick hugs her and tells her to let him know. Kaitlyn tells the men that she wants to bring Nick in the mix, the men are not happy. Shawn B. is upset, he feels that if she was confident in their relationship she wouldn’t even think about bringing Nick on the show.

Nick gets anything but a warm welcome from the other men. Nick tells the men that he is not there to cause drama. Shawn sits down with Kaitlyn and tells her that Nick is fake and pompous. Shawn snoops on Kaitlyn and finds her kissing Nick. Ian takes Kaitlyn to the side, he calls her shallow and says that she is only there to make out with the guys, he leaves the show on his own.

Kaitlyn takes the men to Dublin, Ireland. The tension between the men is at an all-time high and Kaitlyn made a bold decision in deciding to take Nick on the first one on one date, angering many of the other men. On their date, Nick buys the two of them rings. The only concern she has with Nick is that their chemistry is too passionate, too intense. At dinner, she invites him back to her hotel to hang out a bit. In her suite, they were intimate, before the fantasy suite. Waking up the next morning, Kaitlyn felt guilty. She doesn’t feel that she should have gone there with Nick because she has a strong connection with the other men.

Kaitlyn sits down with Shawn and tells him that she slept with Nick. Shawn tells her he needs a minute to think about this, he walks away for a bit. Later at the rose ceremony, when Kaitlyn offers Shawn a rose, he tells her that he needs to speak to her. She tells him that she shouldn’t have said certain things to him because she fully intended to explore other relations, and he needs to trust her, but she doesn’t think he does. As many concerns Shawn has about Kaitlyn, he decides to take the rose because he cares about her.

Kaitlyn has a lot of anxiety because of Shawn and Nick, but right now, she feels really excited about Nick. It is her date with Nick, he writes her a letter and admits that he is falling in love with her. He tells her that he is totally in love with her, more than he can say in words.

It is time for Kaitlyn to decide between Shawn and Nick. First, Nick stands in front of her and he tells her that he is hers forever if she will have him. He goes to take out a ring and get down on one knee and she stops him. She tells him that everything, the off-camera time, when they were intimate meant a lot to her and it was real to her. He tells her that what he felt about her was more than just a moment. She feels awful and he doesn’t care, he just wants to leave.

Nick leaves and feels like the biggest joke, she told him that she loved him.

Chris joins Nick via video at his house in southern California. Nick admits that he was a little bit of a trouble maker on the show, but he was sincere. He says that when she broke up with her, he wanted to push her in the pool. He continues, this was nothing but a positive part of his life and he is happy for Kaitlyn.

Shawn did propose to Kaitlyn, and they were together for a few years, but then they broke up. Chris joins Kaitlyn via video in her home in Nashville. She says that she has no regrets. She says she was sure of Shawn at the end because she took all the other relationships to the end where they needed to go. When she slept with Nick it gave her clarity in her relationship with Shawn.

She tried strong with Shawn, and they just couldn’t get past certain things, she feels they started off on the wrong foot. Jason Tartick joins in, he is Kaitlyn’s boyfriend. Chris asks Kaitlyn if she will be on the next season of Dancing with the Stars. Kaitlyn is shocked, she is so happy and she says yes.