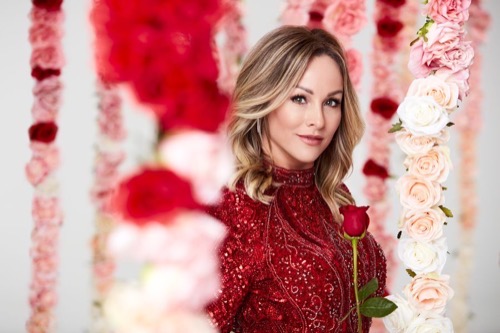 The Bachelorette airs on ABC this evening with an all-new Tuesday, October 13, 2020, episode and we have your weekly The Bachelorette recap below. On tonight’s season 16 episode 1 as per the ABC synopsis, “Clare Crawley will finally embark on her journey to find her soul mate as “The Bachelorette” returns for its sizzling 16th season on a new night.

After putting Juan Pablo in his place on the memorable, 18th season finale of “The Bachelor,” and gaining a new sense of resolve and self-worth, Clare is more than ready to put her romantic disappointments in the rearview mirror and start a wild ride to find her happily ever after.”

It’s a brand new season of The Bachelorette, and this one is worth the wait. We see Dale Moss come out of the limo, and Clare says it is love at first sight. We find out all the rumors that Bachelor Nation is buzzing about.

We go back to the beginning when Chris Harrison called Clare and told her that she was going to be the new Bachelorette, she was jilted by Juan Pablo when he was the Bachelor. Then she went on to Bachelor in Paradise, and she had no luck there either. She is thirty-nine years and looking for a man that is open and doesn’t put up any walls. She says she is so ready for love. Then, the coronavirus pandemic halted production. Once things calmed down and after some coronavirus negative tests, the first day of shooting did happen, at the Waldorf Astoria’s La Quinta Resort & Club in La Quinta, California.

Clare sits down with Chris H. and she tells him that she is looking for a man like her father, a true gentleman. Her father left her a DVD before he passed, she plans on watching it with her future husband. The limos are on their way, Chris H. tells Clare that she is going to crush some hearts. She knows what she wants, and knows she can pick her husband out the moment she meets him.

Ben is the first man to exit the limo, then Riley who tells her that she looks amazing, Zac who insists on a hug, Jordan M. who is really tall and says he can’t remember his name because he is so excited, Jason shows up looking eight months pregnant paying homage to how she arrived when she was on the Bachelorette, Ivan tells her she is very beautiful in his mother’s native language, Kenny is wearing a shirt with photos of her dogs on it, Brendan is super nervous, Mike brought her sandals for when he feet get tired, Jeremy tells he is there for her, Blake Monar is excited to meet her, Tyler shows up in a 70’s station wagon and tells her that he packed up his life to date her.

Bennett shows up in a Rolls Royce – in true Hollywood fashion, including a scarf around his neck, Blake Moynes tells her he has been waiting four months to tell her something and he will tell her inside, Chris says he has been waiting 139 days to meet her, AJ asks her for a twirl and squeezed her hands so hard that her rings dug in, Joe arrives and tells her that he is there to save her love life, Garin asks her if she is ready for an adventure, Robby tells her she is beautiful, Eazy arrives and breaks through a sign that says your future husband.

Jay shows up in a straight jacket, Chasen shows up in a full suit of armor, Demar shows up with a parachute attached to him and says he has fallen for her already, Ed shows up in a life-size bubble, Yosef brought her moon pies, Jordan C. brings her some popcorn, Zach J. gets down on one knee and brings her a joke ring box, Brandon tells her she is beautiful, Dale also tells her she is beautiful gives her a big hug. Clare says she feels like she just met her husband. Chris H. walks up to Clare, he heard what she said. She says with Dale, everything went dark around her, she felt everything that she has never felt before. Chris H. tells her there is more to come, the next limo shows up. Page tells her that he is super excited to be on the journey, Tyler S. thanks her for being there.

Clare enters the cocktail room and tells the men they look amazing. She says it is hard to come out of quarantine and hasn’t hugged anyone in months. Claire can’t wait to tell her mom she has found someone. She sits down with some of the men and has a good conversation, but then she ends up with Dale and opens up about her mother. He says his older sister has underlying health issues and he knows how she feels. He compliments her on her confidence and her energy. Clare says everything seems so natural with Dale, she has huge butterflies. One of her dogs come out and she jokingly tells the men it is a test.

Clare was nervous coming into this, but the guys are making her feel so comfortable and welcome. The men sacrificed so much to be there, to make sure she found love and she is so grateful.

The first impression rose is put on the table in front of the men and the pressure starts mounting. Tyler C. is sitting with some of the men and drops a bomb about Yosef, a lot about being reckless on Instagram, and flirting with girls who are mutual friends from where they are from. Tyler C. doesn’t think he is there for the right reasons. Tyler C. pulls Yosef off to the side for a talk, he tells him what he knows and that he is looking out for Clare’s best interest. Yosef denies everything and says there is no truth to it.

Then, Yosef takes Claire to the side, he tells her that Tyler C. brought something to his attention, and he wants to approach it head-on. He tells her that he wants to be honest and tell her the truth. Clare gets up and goes to get Tyler C. Enzy and the other men are upset because of the drama, it is taking away from time with Clare.

Claire is sitting with the two men, Tyler C. says that a girl who is a mutual friend approached him to say that Yosef was flirting with a girl, sending videos, during the quarantine. Yosef denies it and says he is there for the right reasons, he has nothing to hide. Clare says there are a lot of men that haven’t spoken to her, she needs to continue chatting with them. Clare doesn’t like the speedbump, and she is not letting the squabble get to her.

Clare sits down with Blake Moynes, he broke the rules and contacted her outside the show before they appeared on it, she tells that she really appreciates that he took that risk, she kisses him. Clare goes into the house and takes the first impression rose, she searches out Dale and gives him the rose. She tells him that she has talked to so many men, and just wants to continue talking to him. She goes in for a kiss which ends up being many kisses. Dale would love to sit with Clare and talk with her for hours to get to know her.

Claire is in front of all the men, she apologizes for not having had the time to spend with all of them.
Time for the Rose Ceremony, Clare gives out her roses; Blake Moynes, Eazy, Ben, Riley, Zach J., Tyler S., Joe, Jason, Demar, Chasen, Jordan C., Blake Monar, Kenny, Brandon, Garin, Ed, Bennett, Zac C., Jay, Brendon, Ivan, and Yosef.

It was a long and exhausting night, but Clare feels like she really did meet her husband and he is in this group of men.