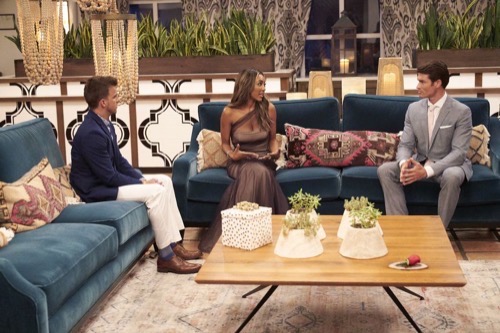 The Bachelorette airs on ABC this evening with an all-new Tuesday, December 8, 2020, episode, and we have your weekly The Bachelorette recap below. In tonight’s season 16 episode 9 as per the ABC synopsis, “The drama rages on as Bennett and Noah continue to confront one another on the impromptu two-on-one date. JoJo ups the ante by explaining to the men that a rose this week will be their ticket to a hometown date and an opportunity to introduce Tayshia to their families.”

Tayshia is on a two-on-one with Bennett and Noah, they have some kind of beef and she wants to get to the bottom of it. Tayshia tells them that the way they go back and forth is like teenage boy drama. Tayshia asks what is in the box, Bennett says it is a gift that he gave to Noah. Tayshia goes off to speak to Bennett alone. She tells him that she is in a hard place, she genuinely care for him. She asks him if ever questioned her integrity, he says no.

She says even though he thinks he hasn’t, she says that he has. He apologizes to her and says that there is drama centered around Noah repeatedly, and only because he stepped up. He apologizes again to her. Next, Tayshia speaks to Noah, and tells him that she is really confused, and lately there is so much drama in the house and he is the common denominator of it. Noah says that Bennett talks down to people, and even his gift was insulting and condescending. She tells him that she needs to think about everything and they will go from there.

Tayshia is back and she has got the rose, she tells Bennett that he has mad her special but it worries her that he is condescending the way he speaks to people and he questions her actions. Then she tells Noah that there are a lot of beautiful things about him but she is worried that he is not ready for marriage yet. Tayshia tells Bennett that she can’t give him the rose and asks if she can walk him out, he says, “wow,” and Noah smiles. When Bennett is alone with Tayshia, he tells her that he is shocked and never once questioned her and he is so sorry. She tells him that she had to decide what she had to do and it was based off what she has seen. He tells her that he hopes she finds what she is looking for.

Tayshia returns to the room and she tells Noah to stop smiling, that was not a victory for him and she did have feelings for Bennett. She tells him that she is not going to give him the rose either because she truly doesn’t know how she feels right now. She gets up and tells him that she will see him later.

The other men return and see Noah still there, they are surprised that he doesn’t have a rose. He tells them that she sent Bennett went home, and she couldn’t give him a rose either. Brendan is done with the drama and wishes Noah would just be quiet for once. Tayshia returns to the men, she tells them that Bennett is no longer with them and the drama is gone, she just wants a good night.

Hometowns are around the corner, and Tayshia is nervous, she doesn’t know if the guys are ready for it. Riley gets some alone time with Tayshia, he surprises her with cake for their one week anniversary for being boyfriend and girlfriend. Then, Zac brings her a picture from the photo shoot that they did, he tells her that no matter what he has her back. He feels confident and sees her completing him. Meanwhile, the other guys are just sitting around and Noah is nervous, if he doesn’t get more time with her, he is afraid that he won’t get a rose. It is time for Tayshia to make her decision on which men she is going to give the roses to. They are down to ten guys, more are going home tonight.

Tayshia returns to the mine and it is time. She says the week was draining and emotion, but she is excited and feels like she has a great group in front of her. She thanks them for their support and tells them she cares about them all.

The first rose goes to Brendan, then Riley, Blake, Ivan and Noah.

It is down to seven guys, let the games begin.

The men find out from Jojo that the next week is hometown week, she will be meeting their families. It’s time for the men to check in with their feelings. A new date card for Ben, “falling in love is full of surprises,” Tayshia. Zac starts crying, he says his family is everything, it’s now getting real. His mom and dad are his heroes.

Ben meets Tayshia for their date, he tells her she is beautiful. Ben is someone she has been excited about since day one, but she is still struggling to see who he really is. Jojo tells them that she has set up a fun amazing oasis, but the are going to have to work together to solve her clues and riddles to find the oasis. They have two scooters and the hunt to the destination will be worth it. The date is very cute and right up their allies. He thanks her for inviting him on the date, he lost time of time and space and just had fun.

Later, at dinner, Ben makes a toast and tells her that he can’t believe this is real life and he is so thankful. She tells him that she feels like he is almost too perfect and she knows he is holding back. She thinks there is hurt there. He asks her what she wants to know. He says his sister is the best person he knows, she has saved him in more ways than one. He goes on, “2018 was a rough year for me. I left a career that I thought I was going to be in forever. The Army didn’t end up working out for me, for a number of reasons, but I ended up breaking my back pretty bad, and I’m 26 years old, and I can barely walk up the steps, and I was living in a city that was too expensive for me, and I was completely lost. My life was very dark, and I didn’t know how to say that I needed things.

I don’t know if you can relate with that, or how that can be. The only person I confided in was my sister, and I’m trying to give you the whole picture.” And there is more, “I had two failed suicide attempts in 2018 and 2019,” he says. “I don’t mean to, like, throw that on you. It’s a weird thing to do here. My sister, she doesn’t know, and I guess she’ll know now. But I didn’t want to be here anymore, and for the same reason that I don’t like to share, it’s because I didn’t want to burden anybody with my problems. And I thought that the easiest way was to just not be around. Luckily, it didn’t work.

And the only thing that got me through that was her, and she has no idea. She saved my life, and so I owe her everything.” He says he is not the same person today and it is insane that he told her all that. She says she has wanted him to open up to her, he is an amazing person. Tayshia pulls out the rose, she tells him that she knows it was hard for him to reveal everything to her, and she gives him the rose. Tayshia feels like this is the breakthrough they needed in their relationship.

They end the night with a private concert for two.

Another date card arrives; Zac, Ivan, Brendan, Noah, Riley, “the truth is that I am falling in love,” Tayshia. Zac is bumped, he wanted the one on one.

Time for the men’s date, everyone is looking forward to the day. Tayshia is going to put the men to the test and see how truthful they are. Tayshia takes the test first, she is truthful about falling in love and with many men, but she was not truthful about regretting to let go some of the men. Ivan is next, he answers truthfully. Noah is next, he lies about missing his mustache. Brendan lies about wanting to meet her parents, and having her meet his parents. Zac tells the truth about cheating on someone and falling in love with Tayshia. Riley is next, he lies about his name. Some of the answers were not what Tayshia was expecting.

Tayshia meets with her men later in the evening, to continue their date. She goes to speak to Zac and tells him that her marriage ended because of cheating. He tells her that it was his first girlfriend, they were in love. He met another girl, met up with her at a bowling alley and French kissed her. And that, is his cheating story, it happened in sixth grade. He admits he hated the day, the question about falling in love with her, he wished it would have been in more of an intimate setting. She says she wanted to grab him because she is falling in love with him too.

Next is Noah, he says he hasn’t done a good job of letting her know who he is. Ivan makes her feel secure, and that means so much to her. Then, she asks Brendan about the meetup with each other’s parents, he says that his parents have seen him divorce, and the next time, he wants it to be the last time. It’s time for Riley to come clean. He tells Tayshia that he was named Dwayne after his father.

He was his best friend for 22 years, and when he got older, they had a falling out. He resented his mother for things his father said about her. He wanted to start over, from scratch, he got a legal name change, his mother was with him. He loves his father, but he is not there. He says he normally doesn’t talk about this. She tells him that he is stronger than hell, and she feels honoured and grateful for him opening up to her. Tayshia rejoins the men and tells them that she needs a little more time to decide who to give the rose out to, she would like to wait for the rose ceremony.

She admits that she wasn’t planning on saying goodbye to him that night. He tells her that he just wanted to see her again because he is dead serious about her, he has never had emotions like this about a girl. She says she has so much in her head and doesn’t know how to express this. She needs the night, and tells him that she will let him know in the morning. He gives her a peck on the cheek, she tells him he can have a hug. Tayshia is blown away, she knows Bennett was saying that just for saying it. She is so confused.