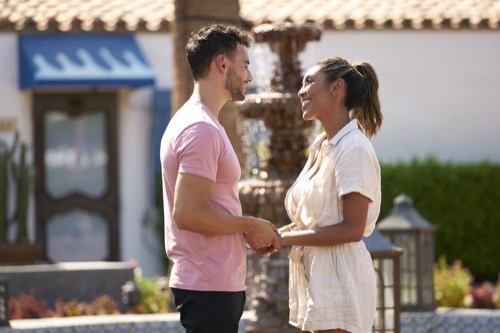 The Bachelorette airs on ABC this evening with an all-new Tuesday, December 15, 2020, episode, and we have your weekly The Bachelorette recap below. In tonight’s season 16 episode 11 as per the ABC synopsis, “One man treats Tayshia to a small-town carnival, but when she meets the man’s family, she hopes they will put to rest her fears of him proposing.

She collaborates with another bachelor, who goes all out to impress her, on designing a pair of sneakers together.”

Tayshia is a little nervous, but still excited about the hometown dates. Chris H. goes in to see the men, he tells them that the final four means hometowns, but because of the pandemic, they can’t go to their homes. He tells them to give Tayshia a little window of what life would be like with them at home. Chris H. has brought family members there to be there for them. Zac has his mom, dad and brother Matt there. Ivan’s both parents are there. Ben’s sister is there. Brendan is going first, his brother Daniel, his wife and niece are there.

Tayshia feels confident in her relationship with Brendan, gut she needs validation. She is so excited to meet his family and is so excited to spend the whole day with him. Tayshia gets to meet his niece, her name is Aliyah. They play carnival games and have a blast together. Brendan loves how Tayshia is taking attention to make sure that Aliyah is having a good time. In the evening, Tayshia meets the rest of Brendan’s family. Aliyah says she had a really good time. Tayshia talks about Brendan’s reservations about the next step.

She says that she was actually freaking out, wondering if Brendan was ready. Daniel takes Brendan to the side. Brendan tells him that he means a lot to him, and he doesn’t want to do this a second time and it fails, so his opinion means a lot to him. Daniel says he liked that he and Tayshia had that physical connection. Brendan says if he could have molded a bachelorette, it would have been Taysha. Lately, he has thought of the way Daniel’s family looks at him and that is all that he wants in this life.

Brendan is really emotional about the fact that Tayshia met his family. Meanwhile, Tayshia tells Daniel that it has taken time for Brendan to come out of his shell and wonders if he is ready for marriage. Daniel says a year ago no, but now, yes with the right person. It felt really good for Tayshia that his brother thinks they would be a good match because he knows Brendan more than anyone. Brendan is thrilled that Tayshia met his family, his reservations are gone and he has very strong feelings for her.

It is time for Tayshia’s hometown with Zac, she has a little butterflies, she is nervous to meet his family. Zac shows her what it is like to live in NY, they start off by getting in a yellow cab, then they have bagels. Next they sit on a park bench and chat. She tells him that she is nervous to meet his family. Zac tells her that family is important to him and they are going to love her. When Zac is with her there is nothing else going on in the world, she lights him up. They meet his parents, kisses and hugs all around.

Tayshia says that what changed the game for her is the first one-on-one with each other. Matthew, Zac’s brother, asks Tayshia to talk in private. Matthew thinks the two have to get into deep conversations, then they will get to where they want to be. Next, Zac’s father, Douglas, tells Tayshia that he hasn’t seen him smile in a long time, and he likes that. Zac tells his mother that nobody has been able to touch him for a long time and Tayshia has broken that barrier. He doesn’t want a family, he does want children and a wife.

Meeting her has given him the ability to reflect on everything that has happened to him. He tells his mom, Beatrice, that he loves her, he hugs her. Beatrice says they are lucky to have Zac where he is right now and she hopes that it works out with Tayshia. Beatrice makes a toast to love with Tayshia. Douglas tells Tayshia and Zac that he couldn’t be happier and he wishes he could spend more time with them.

Time for Ivan’s date with Tayshia, he tells her that cooking is very important to him and his culture. He shows him a video of his niece , she gives them a cooking lesson, she is four years-old. Together, Tayshia and Ivan make the recipe, she is so excited. He feels like they have a real connection and cooking together could be something they share in the future. She asks him who she is going to meet. Ivan tells her that his parents are there and his father is like his hero, he has had two bouts of cancer, a heart attack and cystic fibrosis. Ivan and Tayshia are dressed and on the way to meet his parents, he told her that she is the second girl to meet his parents.

He tells her to just be herself. Ivan’s not worried, but he is close to his parents and it is important to Tayshia that they like her. Ivan’s mom sits down with Tayshia to talk and she tells her that she is a skeptic because this is so fast. Tayshia says she understands. She says she didn’t know that Ivan was twenty because he acts to much older. She tells Tayshia that she wants Ivan’s happiness, no matter where this journey takes them. Next, Ivan’s father speaks to Tayshia. He asks her what she learned about her first marriage. She says she learned a lot and at the end of the day, she got married at a young age and he was the wrong person for her.

He asks if she feels that Ivan could be the one for her, she says absolutely. He is really impressed with her and thinks the two could be a good match. Ivan tells his mother that he is not prepared to propose to Tayshia. Ivan says that it would have meant the world to him if his brother was there, all of a sudden, his brother Gabriel walks in and surprises him. Tayshia tells Gabriel that Ivan lights up when he speaks about him. Gabriel tells Ivan that he is so happy that he could be there for him.

The last hometown date is with Ben, he tells him that home to him is Venice Beach, so they are going to take a walk down the boardwalk. They put on rollerblades, Tayshia has no idea what she is doing. Ben is excited to be with her and feels this insane connection; it doesn’t hurt that he has this insane crush on her. Next they stop for an energy fill up with wellness shots that are aggressive. Next he takes her boardwalk shopping for a hat and sunglasses. He tells her the best thing about Venice is the beach, they change in their bathing suits and go swimming.

He tells her that she is going to meet Antonia, a close family friend who he is with more than anyone else and his sister Antonia. His parents couldn’t make it because of COVID and his father is a doctor. He says his parents want him to be happy, the way she looks in his eyes or squeezes his hand. Tayshia is really hoping that his family can give her insight to who he is. She is falling for him, but she is waiting for him to say it. Tayshia tells the two that if there is one thing that makes Ben light up, it is them.

Tayshia goes into the other room to speak to his sister. She says that she had her eye on him, but he took a while to open up. His sister tells her that it just takes time, he is not hiding anything. Ben then spends the time with his friend, and tells her that Tayshia just gets him and it gets him so excited. She says she can tells that he is smitten with Tayshia. Ben admits that he loves her, but he doesn’t know how to say it to her. She tells him to just do it, he is three quarters the way there. Ben is alone with Tayshia, he says he feels so good, it is so easy. Then he is at a loss for words and he is incredibly uncomfortable.

It is time for the Rose Ceremony, Tayshia has to choose which three men are going to join her for the fantasy suite dates. The first rose goes to Ivan, then Zac and Brendan. Tayshia is sending home Ben.
Tayshia and Ben go outside and sit down, she says sorry to him. She tells him that he is incredible and he has taught her so much since being here, and she really cares about him and appreciated the week very much but she didn’t think that there pages were aligned at this time. He says he would have liked it to go a different way, but it is what it is, and he will be alright. She tells him not to shut down on her. He says two weeks have shown him what he was feeling for her, but he has been wrong before. He says he is heartbroken, but he will be alright. She hugs him and tells him that she will miss him. He leaves.