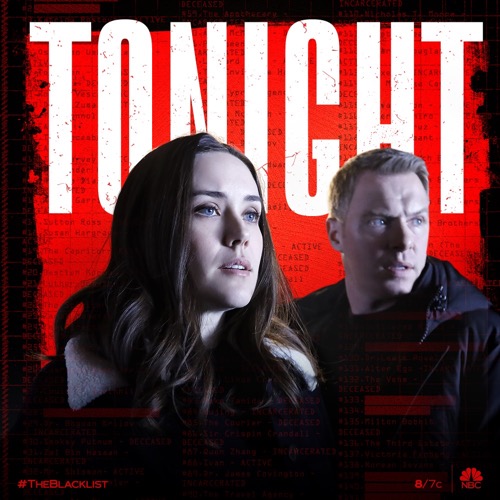 Tonight on NBC their hit drama The Blacklist starring James Spader airs with an all-new Friday, April 10, 2020, episode and we have your The Blacklist recap below. On tonight’s The Blacklist Season 7 episode 14 called, “Twamie Ullalaq”,  as per the NBC synopsis, “A Blacklist case becomes personal for Agent Park when the team investigates a mysterious disappearance in the Alaska Triangle. Meanwhile, Aram enlists Red’s help to find out what really happened to Elodie’s husband.”

The Blacklist episode opens up with Red and Dembe in Alaska driving through the countryside, Red finds the containers he was looking for, they underwater in the lake.

Aram tells Red that Elodie lied about a prenup and she stands to inherit millions. Red said it sounds more like a mercy killing given her husband’s condition. Aram wants to know if Elodie killed her husband, if she did, he has to arrest her. Red says to get a blood sample before they bury the body and he will look into it, no questions asked. Liz walks in and tells him to let the police investigate. Red is preparing salmon, he tells them it is for a celebratory meal. Liz asks what celebration. Red says he has been robbed, precious cargo that was in containers. He goes on the say his cargo is sunk in a lake in the Alaskan triangle. Red tells Liz to find the people who stole his trucks.

Liz updates the team, If they find out who stole Red’s containers they might find out who is responsible for other crimes in the Alaskan triangle.

We see the people who stole the cargo, they have a man inside one of the containers, he is tied up.

Ressler and Liz are in the car driving, his phone is ringing again, it says TROUBLE, he already told Aram that it is his brother calling. They talk about Aram, Liz thinks he should let the police do their work where Elodie is concerned. Liz tells Ressler that he just can’t ignore his brother, Robbie, Ressler says watch me. Agent Park gives the two a lead to a shipping manager. They arrive at his house and he says accidents happen and starts laughing. He gets up to clear his throat and grabs a rifle, tries to shoot the two.

Aram heads to see Elodie, offers her a ride to the funeral home with her to pick out a casket. He tells her picking a casket is a big decision, take her time. Aram pretends to go to the bathroom and instead goes downstairs to the body, he finds Charles, takes a blood sample. He calls Red and tells him that he has the goods. Red says he will arrange a pickup. Aram is back with Elodie, she tells him that she did care about her husband and yes she found a casket.

Red is in Milan, Italy, he goes to see man regarding perfume. Red asks for a specific one, his friends have it and lets him smell it. There is one in ingredient in it that is difficult to come by, it is the same thing that was in the container that was stolen from Red. The man says someone reached out to him after Red breaks one of his expensive bottles, he agrees to give Red the name.

Agent Park is driving a trailer on the Alaskan road to through bait and the men who stole Red’s cargo. All of a sudden, there is an accident ahead on the roadway that is blocking the road. Park is let through the accident, it was real. She arrives at a weigh station and there doesn’t seem to be anyone there. Liz tries to call her, there is no answer, her cell phone is in the snow. Then we see the guys who stole Red’s containers, they have Park and through her in the container with the man who was already in one tied up.

The man tells Park he was abducted and thrown in the truck, he just ended up here by accident. She reveals to him that she is an FBI agent, his name is Colt. She tells him that she died once in Alaska, she didn’t come back to do it again.

Liz and Ressler call Cooper and update him on Park vanishing. Red calls the team, he says Twamie Ullulaq took his cargo, he doesn’t know where he is, but he knows he did it. He is a native Alaskan that was trained by the FBI during the cold war.

Twamie goes into the cargo trailer and threatens to shoot Colt if agent Park doesn’t tell him what the FBI knows. All of a sudden, before he has a chance to shoot there is a problem. A man in another camp is dead, Twamie is pulling stakes.

Aram recognizes a man that was with Elodie at her house when he picked her up, he is the man responsible for her husband’s injuries. Aram goes to see him and asks what he was doing at her house, he says he was there so she could pay him, and when Aram asked for what, he says he doesn’t want to know.

A man comes into the cargo trailer with Colt and Park, she overtakes him and when she does, Colt grabs his gun and tells her it looks like she did go there to die again.

Agent park tries to convince Colt to let her go with him, he gives in. She says he can carry the gun, but she wants to carry the bullets, the first step in them trusting each other. It doesn’t take long for Twamie to know that they are gone, he sends two of his men after them. It turns out that Park and Colt know each other, she says he killed her mother. He says he knows a lot about her and if she turns him in, he will tell a lot about her. All of a sudden, he is about to hit her with a piece of wood over the head, and his foot gets stuck in a bear trap. She gives him the bullets in case Swamie’s men find him first, she goes for help.

Liz and Ressler, along with other agents arrive at Swamie’s location. A shootout ensues and they end up getting control with Swamie in handcuffs. It doesn’t take long for the men to find Colt, Park is also there and Liz. In the end, one of the men try to shoot Park, Colt saves her life.

Aram has Elodie and the man who hurt her husband, he says Charles didn’t fund the Florida mall, she did. She says that she found a way to save herself, she used him. Aram asks her outright if she killed Charles, she says no. He says he hopes that’s true.

Red orchestrated the whole thing with Colt and Park, she tells him he had no business interfering in her life. He says he knows about her mother and her relationship with Colt. She says he and his mother were addicts, she doesn’t blame him for what happened. She says she was seven when it happened, she was the one who ended up giving her mother the last fatal injection.

Aram gets his results from the blood test.

Agent Park goes to see Cooper about what happened in Alaska. She tells him that things have happened in her past that he is not aware of and should be. He pours them both a glass and they talk.

Aram goes to see Elodie, he arrests her.