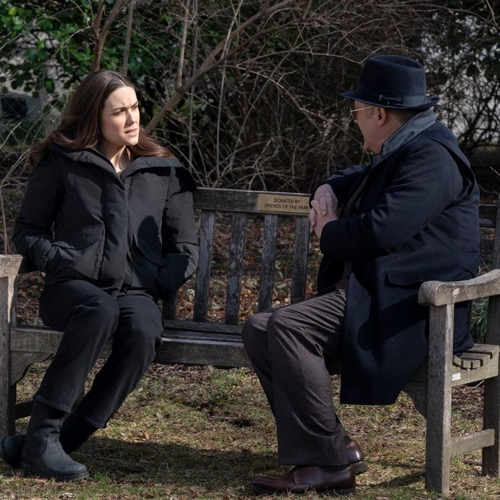 Tonight on NBC their hit drama The Blacklist starring James Spader airs with an all-new Friday, April 17, 2020, episode and we have your The Blacklist recap below. On tonight’s The Blacklist Season 7 episode 16 called, “Nyle Hatcher”,  as per the NBC synopsis, “Liz and the Task Force take on a cold case that may have some new victims. Meanwhile, Red tries to help a friend of Dembe who is in danger.”

We see a recovery team collect victims from a plane crash, one of them is Abraham C. Geller. In an identification ward, a man recognizes Mr. Geller, he takes out a needle. The same man who sticks the needle in Geller, we see meet up with a woman named Crystal, she tells him that he looks different from his profile picture. She asks him if he is a cop, he says no and he didn’t ask her there for sex, it is something different. He calls her by her real name, Angela, and now she gets worried. He says he is someone that knows about her that she wants to believe. He knows about her father, about the medical debt, the collectors. He tells her he has info that might change her life.

Present-day: Liz is looking through Ilya’s apartment, everything is gone – she is with the private investigator that she hired.

Red is in a mosque, the leader tells him that the FBI visited them and told them that some of their members were communicating with Serian Jihadists. Liz’s private investigator calls Red, she tells him that wherever Ilya is, she is not going to find him. Red tells Dembe that if Liz knows that he is not Ilya, he wonders what else she knows. Dembe tells him to ask her, she is waiting in the park.

Red and Liz sit on a park bench, he says he likes that they are on the same side of things. He would like her to look into something regarding Dembe. But first, he wants to hear about her cold case. Liz says he is called the Bone Yard Killer, his first victim was found when the police exhumed a body for autopsy, a second body was buried in that same grave, a young woman four feet below a freshly buried coffin, murdered and hidden in the last place anyone would ever look for them. Since then, three women have been discovered this way. The murderer is using gravesites as a place to hide the bodies, all the women worked in the sex trade. None of the victims were sexually assaulted. They were alive when he buried them. He drugged them so they would die in their sleep. Liz thinks the killer doesn’t want to kill, he is mimicking these profiles in order to hide some other agenda. He gets some kind of satisfaction from something other than the tragedy itself.

Liz asks Cooper for some help regarding the mosque for Red, he says he will make some calls.

Liz tells Ressler that Ilya is out there somewhere, she has no idea where and her mother’s life depends on it.

Cooper has found the information on the mosque, apparently, two members were smuggling shipping containers in and out of Syria. They don’t know what was shipped or by whom. Dembe vouches for the mosque.

We then see Angela have her baby, she calls her boyfriend and tells her she heard from the lawyer and doesn’t know what to do, she is not prepared. He tells her that he has it all worked out, he is on the scene of bodies being found dead by the police.

Aram thinks he may have found something. Genetic material passes from mother to child during pregnancy, it is also happening in reverse. The father of her child is Jonathan McClaire. Cooper says to bring him, Aram says he can’t, he was killed eleven months before Moira James gave birth.

Red is on the scene of a shipment of wagyu beef, he wants to find out from Kostas what the men from the mosque are bringing in. Red threatens to turn off the freezer in the truck that will destroy the shipment that is worth a lot of money. Kostas swears he knows nothing.

Ressler and Parker go to see Mrs. McClaire about her husband, Parker tells her that Moira James was murdered. She says they had an affair that resulted in a child, they settled. Her husband’s career was based on a happy child, they agreed to a secret settlement. She still can’t believe that he stepped outside of their marriage.

Liz finds information that proves all the victims were mothers. Red goes to see Mickey, the file clerk for the courthouse.

The victims all had children out of wedlock with very wealthy men and they all made paternity cases. Within weeks of the agreements, all the women were murdered. Jonathan McClaire was not the only father that died before the birth of his child, there are five of them. They all died in crazy accidents. They all have one thing in a comment, Nyle Hatcher, he signed all of their death certificates, he is a mortician. Aram has an address, the mortuary where he currently works.

Ressler and Liz go to the mortuary, Hatcher is out for the weekend. They want his home address, and they want to get into his office. Ressler gives his clerk a warrant. Liz finds a freezer, she picks the lock, and inside there is a thermos, it has sperm in it. Hatcher was stealing sperm from the dead bodies, it is viable 36 hours after post mortem. Therefore, he wasn’t killing the men, he just stole their sperm. He would inseminate the women with the sperm, once the babies are born, he kills the women and sells the baby for adoption.

Hatcher calls Angela, he tells her to drop off her child and she will get what is coming to her.

Ressler and Parker go see the Geller lawyer, he said Angela was there to get money off the Geller family for the baby, he wired the money less than an hour ago. Hatcher meets Angela in a car where she was going to drop the baby, he injects something into her neck, she passes out.

Cooper has a location for Hatcher, he gives Ressler the coordinates and we see Hatcher removing Angela’s body from the car, but first, he gives her another injection then commences to bury her body. Ressler arrives just as he is about to leave, he tells her that he doesn’t know what he is talking about. The baby is crying, Liz tells everyone they are looking for a fresh grave, pan out. Ressler finds the grave, he and Liz start digging, they find Angela, she has a pulse.

Dembe and Red find the guys who were doing the smuggling at the mosque. Red asks one of the men how they get to the basement, he says he doesn’t have one. Red finds the trapdoor and his basement. Red goes downstairs and finds women and children.

Hatcher tells Ressler and Liz that it wasn’t personal and it is not his fault that people don’t care when prostitutes are killed. He has been surrounded by death all his life. He found a way to steal money from people who were already gone and wouldn’t care. He chooses women who needed to be otherwise released from their insufferable lives. He thought he was going to leave the children at the fire station, but couldn’t do it. The children are all home, they have a loving father and an endless amount of financial resources. He says they brought him back to life. Ressler tells Hatcher that the children will be much better without him.

Back to Red, the women and children are refugees seeking asylum, the mosque knew nothing about them.

Hatcher is arrested, he did set the money aside for the children. Liz says they have to tell the widows that their husbands didn’t cheat. Child services is going to match the children with their families.

Liz meets with her private investigator and tells her that she knows that Red got to her.

We see Katarina and she has Dembe’s Imam captured.

A fingerprint is found on Imam

Imam’s desk, it belongs to a man who has been in prison for fifteen years, Arturo Ruel. Dembe goes to see Red and finds him passed out on the floor.