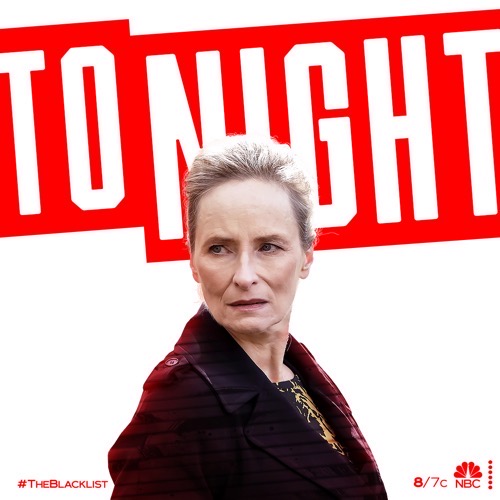 Tonight on NBC their hit drama The Blacklist starring James Spader airs with an all-new Friday, November 20, 2020, episode and we have your The Blacklist recap below. On tonight’s The Blacklist Season 8 episode 2 called, “Katarina Rostova: Conclusion”,  as per the NBC synopsis, “As Liz pushes a source for answers, Red and the Task Force grapple with the implications of her actions. Tensions boil over and a drastic action is taken, which will change Red and Liz’s relationship forever.”

Liz is in with her grandfather, her mother, Katarina is watching via video. She tells him that she wants answers to put everything to a stop.

Red is sitting in a chair, Edouardo is in front of him with a tire iron and Red tells him to hit him, take his best shot, or he will. Red has a gun and tells him to give him the VIN number of the van something. Edouardo says he has nothing and he didn’t know that he was putting Red’s people in danger. Dembe comes in, he says they can’t find the van. Red apologizes to Edouardo, he gives him money and tells him to take Kate to dinner.

Cooper asks the Task Force where are they in their investigation. Aram says they are looking for a man who they found roadside surveillance of, but the plates are fake. Red shows up and tells Cooper they are all investigating the same thing, maybe they should talk.

Liz’s grandfather knows Katarina is there, he tells her to tell Katarina to come out, Liz won’t. She tells him that she knows about N13. He says that if she says N13 at the wrong time, she will live to regret it. She asks him who he is protecting. He says he will die with his secrets, they are not his to tell and he did his best to protect her and Agnes. Medically, he is not doing well, Liz is pushing too hard.

Red tells Cooper that he won’t get to Liz without his help. Ressler says that they don’t need his help, Red takes a personal attack on Ressler and tells him that his judgment is fogged because of his being smitten like a schoolboy over Liz.

Liz calls Ressler, she needs meds for her grandfather; Red listens in to find out where she is. Meanwhile, the doctor tells Katarina that Dom is having some kind of episode, he is not doing well. Katarina tells him to open his eyes, he doesn’t see Katarina, he sees his wife, he holds and kisses her hand.

Ressler meets with Liz, she tells him that she made her choices and she is not there for his understanding or forgiveness. She tells him that Dom is in a warehouse in a safe house, he had another seizure, he needs more doctors. She goes on to say that Dom wouldn’t say anything, any kind of humanity he had died a long time ago.

Katarina is still with Dom, he is hallucinating and she is playing into it to get the answers she wants. Meanwhile, Ressler tells Liz to give up her family, she doesn’t want to. He warns her that if she doesn’t stop protecting Katarina she is going to put herself at risk.

Katarina is with Dom. Meanwhile, Dembe and Red are still trying to track them done. Red knows that Liz chooses this place because of all the mid-size warehouses. Ressler and Liz walk in, they were ambushed and dragged in front of Red who tells Liz that he is very disappointed in her. Ressler reminds Red that they are Federal Agents and he can’t hold them. Red tells Ressler to leave, Liz is staying.

When Ressler is leaving he asks Dembe not to hurt Liz, he says they won’t. Cooper calls Red and he is upset. Red says he would be upset if the person the task force was looking for sneaked away with a member of his team. Red tells him that he is holding Liz. Cooper tells Ressler to get their people to the warehouse district.

Katarina is still talking to Dom, he finally tells her that Red has the archive and so does she.

Red asks Liz how long she has been helping Katarina. She doesn’t answer, but she says she is her mother. Red tells her that Katarina is exploiting her. She tells she knows about the archives and asks if he is N13. Then she says to him, am I willing to let you kill her, and the answer is no. Red gets a call, his men think they have found where Dom and Katarina are. Liz tells him that if he hurts her, they are done. Red looks at her, and leaves.

Red and his men find Dom, they kill one man to get in. The doctor is there, he says that Katarina is gone. Red goes to Dom’s bed, Dom tells him that he is too late, he told her everything. Meanwhile, Katarina sees a man lurking in the hallways, armed, she knocks him out and gets away.

Dembe has Liz hostage, her hands are tied, she yells at him, and tells him it is wrong, she begs him to let her go so she can stop him.

Red is with Dom, he is not doing well. Dom says he is happy that he got to say goodbye to his daughter. Red tells him that she loves him, she always did., nothing could ever change that.

Katarina is walking down the street when she sees a black SUV drive by, she hides. All of a sudden, one of Red’s men sees her. Katarina steals a car and gets away, one of the men shoot at the vehicle, but it doesn’t stop her. Meanwhile, Ressler arrives in the warehouse and finds Red with Dom, who has died. Red leans down and kisses Dom on the head. Ressler tells him that he is responsible for Dom’s death, Red says he is probably right.

Katarina calls William Heidegger, the highest-ranking representative of the towns and organization of the western hemisphere, and tells him she knows who is N13 and she will tell him who it is in exchange for her safety. He says she is N13, she says no, but she knows who is. He agrees to meet her at a park. Meanwhile, the whole time William was on the phone with Katarina, Red was in his office with his men. Red calls Dembe and tells him they were right, she set up a meeting with Heidegger.

Dembe tells Liz that her grandfather, Dom, passed away. Dembe tells her that it isn’t what it appears to be with Red. She tells him that he is no better than Red is, and Red has killed everyone that she loves. She says she is done, she can’t fight him anymore, he wins. Dembe tries to hug her because she is crying and she hits him, she gets in the driver’s seat when he goes around to get her and he has his gun at the window, but he doesn’t shoot, he lets Liz go.

At the park, Katarina arrives and goes down near the water, she sits down on a bench beside a man who she thinks is Heidegger and tells him that Red is N13 and he has the archive. Red shows up, he has a gun, he takes Katarina’s gun. He tells her that Dom is dead. He says she killed Dom just liked he killed Heidegger. Liz calls Ressler and tells him that he has to send units to the park, Red is going to kill Katarina. She is on her way, but she is unarmed. Back to Red, Katarina tells him that he framed her.

Red says he helped her, but it wasn’t enough. She says what if she promised not to tell a soul what she knows. Then she tells him that Liz will never forgive him If he kills her, she is her mother. Katarina gets up to walk away, he tells her she can’t leave. Liz is in the park, she sees Red shoot Katarina twice in the back. Liz screams and one of Red’s men holds her back. Red’s men take the two bodies, they leave. Liz falls to the ground and cries.