The Bold and the Beautiful Recap: Friday, June 26 – Steffy Tells Liam She Slept With Bill – Carter Professes Love to Maya 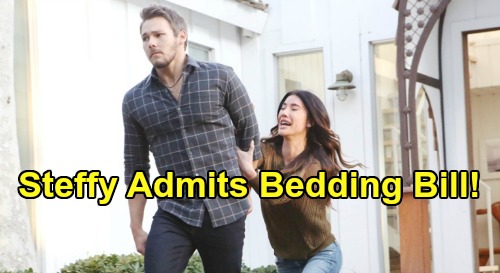 The Bold and the Beautiful recap for Friday, June 26, was an encore episode that originally aired on January 2, 2018. The episode is part of “Emmy Winning Performances Week” and it helped Jacqueline MacInnes Wood win the Best Lead Actress Emmy for her role as Steffy Forrester Spencer.

In the episode, Liam Spencer (Scott Clifton) will have just discovered the paternity test paperwork in Steffy Forrester Spencer’s (Jacqueline MacInnes Wood) purse. Liam will demand to know what it is, and why she needed a paternity test. Steffy will be taken off guard and she’ll rush inside the house for some water. Liam will follow closely behind.

Liam will say that he knows paternity tests aren’t standard, and that Steffy must have asked for the test to be run. Steffy will try to avoid Liam’s questioning and demands, saying that Liam is the father.

Steffy will beg Liam to let the whole thing go, but Liam won’t, and he’ll finally realize when Steffy must have been with someone else – the night she had left him.

Liam will insist that Steffy tell him who she slept with, while Steffy tries to deflect, clearly not wanting to tell him that it was Bill Spencer (Don Diamont). Steffy will tearfully tell Liam that she wanted to confess to him that very evening, but then he had wanted to renew their vows, and she just couldn’t tell him.

Liam will demand to know who the person was, and he’ll guess that it was Wyatt Spencer (Darin Brooks), but Steffy will say that it wasn’t. Liam will yell at Steffy, until Steffy finally blurts out that it was Bill…it was Liam’s father.

Meanwhile, over at Spencer Publications, Bill and Justin Barber (Aaron D. Spears) will discuss Bill’s one-night stand with Steffy, and about how Liam can never know about it. Justin will pledge to keep the secret for Bill, but he’ll ask Bill if he’ll be able to hide his feelings for Steffy going forward. Bill will say that he’ll do so for Liam’s sake.

At Forrester Creations, Rick Forrester (Jacob Young) and Maya Forester (Karla Mosely) will spend some happy moments together. Maya will be glad that Rick didn’t confront Ridge Forrester (Thorsten Kaye) about his affair with Quinn Forrester (Rena Sofer) over Christmas. Rick will say that it just wasn’t the time for that.

When Rick leaves, Carter Walton (Lawrence Saint-Victor) will arrive and talk with Maya. Maya will sense that something’s on Carter’s mind, and he’ll say that he has been thinking about their time together and how he treated her when he learned about Maya’s past. Carter will say that he misses Maya, and that he will always be there for her.

Maya will gently tell Carter that she’s happy with Rick and loves being a wife and mother, and that she just doesn’t think about Carter romantically. Finally, Rick will chat with Nicole Dominguez (Reign Edwards), whom he’ll thank for giving him his wonderful family.

Rick and Nicole will discuss how he and Maya should come to Paris to visit with her and Zende Dominguez (Rome Flynn) soon.

Friday’s encore episode of B&B was a great walk down memory lane, so be sure to tune in! You can trust CDL for all your new and exciting B&B news, updates, and spoilers, so keep checking back with us often.