The Bold and the Beautiful Spoilers: B&B Stops Production Over COVID-19 Testing – See When Filming Resumes 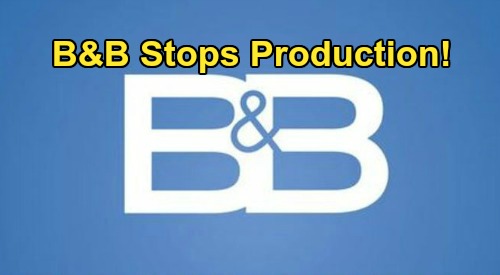 The Bold and the Beautiful (B&B) spoilers reveal that the CBS soap began filming again on Wednesday, June 17, but they’ve already hit a bit of a snag. According to Variety, B&B has been forced to hit the pause button as they work to make safety the priority. Production is being halted once more to make sure The Bold and the Beautiful can accommodate all the proper COVID-19 testing.

A spokesman for Bell-Phillip Television revealed more about the reason for the holdup. Thankfully, the delay will be a brief one! B&B will get rolling again next week, but they have to make sure the cast and crew are kept safe. That’s the main goal as The Bold and the Beautiful works to deliver new episodes to fans.

“We have paused very briefly to modify our testing protocol to better accommodate the large volume of testing needed,” the spokesperson explained in a statement. “Safety remains our top priority as we continue to move forward with the production of the Bold and the Beautiful. B&B filmed with cast and crew today and it was a successful first day back at work.”

Again, this delay won’t be a long one. The Bold and the Beautiful is expected to resume filming again on Tuesday, June 23. They’re just taking a moment to regroup and get all the necessary testing lined up. That’s obviously an important part of all the safety protocols that are in place, so they have to get it right.

This can also serve as a lesson to other shows as they resume production – including the other soaps. The Young and the Restless, General Hospital and Days of Our Lives will hopefully get back up and running again soon, so they’re undoubtedly watching B&B’s efforts closely right now.

Now the other soaps know to prep for a high testing volume, especially since all three have larger casts and crews for their lengthier shows. As for The Bold and the Beautiful, we’ll look forward to them shooting new scenes again on Tuesday and beyond!