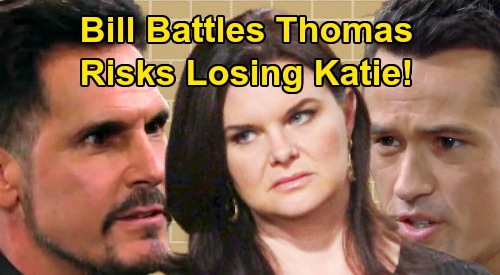 The Bold and the Beautiful (B&B) spoilers tease that Bill Spencer (Don Diamont) will take time to dote on his love. He was terrified he might lose Katie Logan (Heather Tom) during all the kidney drama, but “Flo” Fulton’s (Katrina Bowden) sacrifice saved the day. Bill’s just glad Katie lived through the crisis and will stick around for her family.

With that in mind, Bill will want to cherish every moment with Katie. The Bold and the Beautiful spoilers say Bill will shower Katie with attention and most likely a few gifts. After all, money is Bill’s second favorite thing besides his family! He’ll gladly throw some of it around to make sure Katie feels pampered and treasured.

B&B fans can expect Katie to be touched by Bill’s efforts. She’ll indeed feel adored, so their relationship should be stronger than ever. Of course, that’s exactly when to start worrying about a couple. Once a soap duo’s smooth sailing, it’s often a tell-tale sign that trouble’s on the horizon.

The Bold and the Beautiful spoilers say a major war is brewing on the CBS soap – and not just the one between Quinn Forrester (Rena Sofer) and Brooke Forrester (Katherine Kelly Lang). That’ll indeed be part of it, but it’ll be bigger than that.

Thomas Forrester (Matthew Atkinson) will renew his fight to rid the Forresters of the Logans for good.

Hope Logan (Annika Noelle) is obviously the exception, but when it comes to the other Logans? They’ve gotta go – at least that’s the way Thomas sees it. However, Bill will feel the need to step up for the Logan women. He loves Katie and certainly cares about her sisters, so he’ll want to take a stand.

Unfortunately, that plan could go awry. Bill will end up having to do battle with Thomas and most likely Quinn, too. We all know how Bill can be when he gets fixated on a goal like this. He starts blowing up buildings and pulling all kinds of crazy stunts.

Bill could easily go too far and make Katie question if he can stick to his wholesome family man image. Katie’s priority is Will Spencer (Finnegan George) and making sure he stays safe. It sounds like the situation could be anything but safe once all this Logan-Forrester-Spencer mayhem erupts.

Katie will be caught up in the war as well, but how Katie fights and how Bill fights are two very different things. If Bill crosses the line, he could put his relationship with Katie in jeopardy. Thomas had better hope Bill and Katie stick together! There’ll be a massive target on Thomas’ back if Bill loses the family he loves so much.