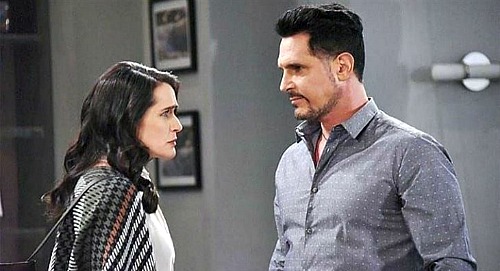 The Bold and the Beautiful spoilers document that Bill Spencer (Don Diamont) appears to have lost Katie Logan (Heather Tom) and hasn’t been able to convince her sister, Brooke Logan (Katherine Kelly Lang), to give him another chance. So, would he, under any circumstances, seek companionship with Quinn Fuller Forrester (Rena Sofer)?

This is B&B. So, the outrageous scenario that’s being proposed isn’t just plausible, it may already be developing.

Katie is no fool. She’s given Bill many opportunities to prove that he’s capable of change. Yes, Tom’s character was even willing to allow Bill to make serious mistakes in the past and offer him repeated forgiveness. She knew he wasn’t perfect and wasn’t expecting that.

And, most importantly, Katie risked her own well-being in order to put Will Spencer’s (Finnegan George) needs first.

But the most modest expectation, that Bill would remain committed to her, was dashed in the spring. The stunning scene where Bill was seen kissing Brooke in the cabin thrust an emotional knife into Katie’s heart and appears to have been too much.

Unless some unexpected circumstance radically changes the trajectory of Batie, this couple is over. No one, even Bill, blames Katie for making that decision.

Well, actually Eric Forrester’s (John McCook) estate can’t simply be called a house. It’s a gorgeous mansion, with soap fans long knowing that the exterior shots are those of what was once the actual mansion of the late show creator’s Bill Bell and Lee Phillip Bell.

Quinn’s subversive defiance of her husband’s repeated request, that she leave Brooke alone, stands to topple Queric’s marriage. There’s little doubt that the Las Vegas, Nevada, manipulations of Ridge Forrester (Thorsten Kaye), which were orchestrated by Quinn, will eventually be revealed.

How can Eric overlook, or possibly even forgive, Quinn when he learns that his wife sabotaged his son’s marriage and that she did so in order to ruin Brooke’s life? It’s very reasonable to believe that Eric will at least separate from Quinn at that time.

Quill has a good ring to it. Brinn, not so much.

With whatever nickname B&B fans might take to, Quinn and Bill would be a must-watch pairing. The sincere loathing they have for each other has never overshadowed the fact that they had a mutual attraction at one point in time. Wyatt Spencer’s (Darin Brooks) existence makes that reality undeniable.

Desperate, playing to their impulsive natures and similar reckless styles, Quinn and Bill could happen. No, they should happen, as this shocker would create quite the sustainable stir.