BY Heather Hughes on May 4, 2020 | Comments: Leave Comments
Related : Soap Opera, Spoiler, Television, The Bold and the Beautiful 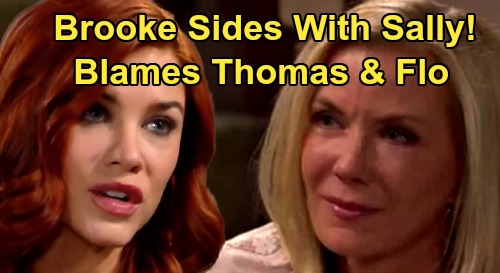 The Bold and the Beautiful (B&B) spoilers tease that Sally Spectra (Courtney Hope) will need an ally in the aftermath of her terminal illness scam. This is all going to backfire big time, so is there anyone who might take Sally’s side? We can think of one alliance that might form, and it could cause even more drama for “Bridge.”

Brooke Forrester (Katherine Kelly Lang) wants to repair her marriage to Ridge Forrester (Thorsten Kaye), and she might have a shot thanks to Shauna Fulton (Denise Richards).

Shauna’s taken herself out of the equation and intends to stay in Las Vegas. That’ll change down the road, but it could give Brooke an opportunity to fix things with Ridge – at least for now.

However, Brooke often has strong opinions that clash with Ridge’s. Just look at how much destruction their Thomas Forrester (Matthew Atkinson) disagreement caused. In fact, Thomas could still be a factor in their relationship after Sally’s scheme is exposed.

Sally has been dumped on more than one occasion by Wyatt Spencer (Darin Brooks), but her romantic problems started long before Wyatt. Thomas jerked Sally around back when they dated, so she was already heartbroken going into this Wyatt relationship.

Sally developed serious trust issues due to Thomas, so that’s something that might stir up compassion in Brooke.

Plus, “Wally” was doing just fine until Flo appeared and Thomas pressured Sally into keeping secrets. All of that led to Wyatt breaking up with Sally and reuniting with Flo Fulton (Katrina Bowden). After the bogus adoption plot blew up, that sent Wyatt crawling back to Sally before he later dumped her again.

What happens after Flo’s saved and Sally’s lies come to light? It’s easy to imagine Brooke putting most of the blame on Thomas and Flo – the man who tormented Hope Logan (Annika Noelle) and the woman who helped steal Hope’s child.

Brooke may understand how Sally was driven to her breaking point, but Ridge obviously wouldn’t see it like that.

This would give Ridge an excuse to defend Flo, who happens to be Shauna’s daughter. It’d be a simple way for B&B to push Ridge back in Shauna’s direction. Will Sally become the new Thomas – the next big thing for Brooke and Ridge to fight over?

Ridge will be outraged by Sally’s deception and the danger to Flo. The Bold and the Beautiful viewers will recall how Ridge altered Sally’s designs for his his couture line. That’ll rev Ridge’s anger up even more, so he may insist Sally’s actions are inexcusable.

Nevertheless, Brooke might argue that she’s seen the kind of damage Thomas and Flo can do to a person. Brooke may think Sally deserves another chance since she’s been through so much. It’d be an interesting place to take this story and could set up Ridge’s reigniting spark with Shauna.