BY Heather Hughes on May 9, 2020 | Comments: Leave Comments
Related : Soap Opera, Spoiler, Television, The Bold and the Beautiful 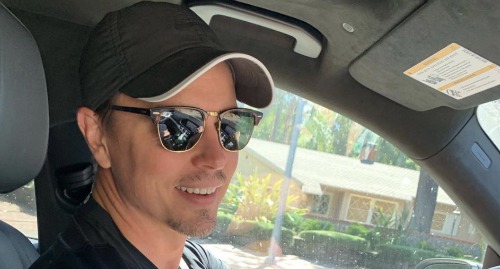 The Bold and the Beautiful (B&B) spoilers reveal that Darin Brooks (Wyatt Spencer) is in the middle of a messy storyline – at least he was until the COVID-19 aka coronavirus crisis forced B&B to suspend production. It’ll take a while for the show to resume production, but Brooks has the scoop in the meantime.

The B&B star opened up to Soap Digest about Wyatt’s dilemma and what’s ahead for the character. Before we dive in on what’s coming up, let’s take a brief look back. Brooks admitted he’s really enjoyed seeing the classic episodes, which have featured Wyatt and his various loves. The Bold and the Beautiful actor has a blast with all his costars, so they truly make some wonderful memories on location.

Speaking of those costars Brooks gets along with, Katrina Bowden (Flo Fulton) and Courtney Hope (Sally Spectra) are certainly among Brook’s real-life friends. With that in mind, is Brooks torn like Wyatt about who his character should be with? “No,” Brooks said with a laugh. “We are all friends.” Brooks talked about running lines with both leading ladies and making the best acting choices possible.

When it comes to this love triangle featuring conflicted Wyatt, “dying” Sally and Flo the super sleuth, Brooks suggested the three of the are giving it their all. “Watching these episodes has been fun because we really put a lot into it,” Brooks said. “I can’t wait to see where it goes because, look, the s—t has got to hit the fan at some point, right?”

Brooks also mentioned a couple of jokes that the cast has on set. One is about poor Wyatt always being the last to know. The other is to never tell Katie Logan (Heather Tom) a secret if you’ve got one!

When it comes to what’s ahead for Wyatt, Brooks confessed that he’s in the dark. However, the B&B star’s confident the show will deliver something juicy. After Brooks was asked if he knew what was coming up, he offered a great response. “No, and I wish I did,” Brooks said. “But whatever comes next when we get back to work, I know it’s gonna be good!”

Once the COVID-19 situation’s under control, it’ll be nice to see Brooks and the rest of the gang get back in the studio. We can all look forward to new episodes right along with him! As other B&B news comes in, we’ll provide the latest updates.