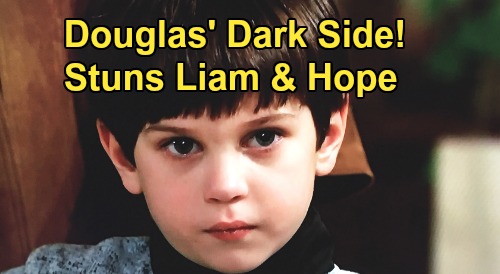 The Bold and the Beautiful (B&B) spoilers tease that fans will soon see a very different side of Douglas Forrester (Henry Joseph Samiri) – and so will those closest to him. Douglas has always been a pretty sweet kid, so it’s easy to see where this is headed. If B&B intends to show us another side of Douglas, it has to be the dark side!

Douglas’ upcoming behavior is bound to cause serious issues, but it’s to be expected since kids often learn by example. Thomas Forrester (Matthew Atkinson) was certainly a bad one! Liam Spencer (Scott Clifton) and Hope Logan (Annika Noelle) are hoping to provide the loving, stable environment Douglas needs, but is it too little, too late?

Douglas has already been exposed to all kinds of manipulative, abusive tactics. Thomas loves Douglas in his own way, but he’s been a horrible father to the kid. B&B fans know Douglas became a pawn along with everybody else. It was all about Thomas and whatever he wanted.

Since Douglas has watched and listened to so much garbage from Thomas, it surely sank in somewhat. The Bold and the Beautiful spoilers say Thomas won’t sit back and let “Lope” take his son from him. That may play a role in Douglas’ upcoming behavior.

Will Thomas manipulate Douglas again on the sly and turn him against Liam or even Hope? That’s one possibility to consider. This new side of Douglas that we see could be Thomas’ doing. Thomas might want it to look like Douglas acts out when he’s not with his true daddy.

On the other hand, Douglas is awfully happy with Liam and Hope lately. B&B viewers know Douglas ultimately understood that Thomas lied and did bad things. Douglas was thrilled over the little “Lope” wedding at home, so he’s content right now. If Thomas tries to mess things up again, Douglas may take matters into his own hands to stop him.

Regardless, The Bold and the Beautiful spoilers say some personality updates are coming for Douglas. It sounds like a bad seed storyline is coming, which will turn Douglas into Thomas 2.0 and create plenty of problems. On the bright side, perhaps Thomas will eventually realize just how much damage he’s caused to his own son. Damaged Douglas could do some major damage himself!

As other news emerges, there’ll be lots of details to deliver. How do you feel about Douglas’ dark turn? Do you think Douglas’ behavior will help Thomas learn from his mistakes? CDL will have all the hottest Bold and the Beautiful spoilers, news and updates, so be sure to check back often.