The Bold and the Beautiful Spoilers: Finn Promises To Love Steffy Like She Deserves – ‘SINN’ Remove ‘Steam’ Portrait Together? 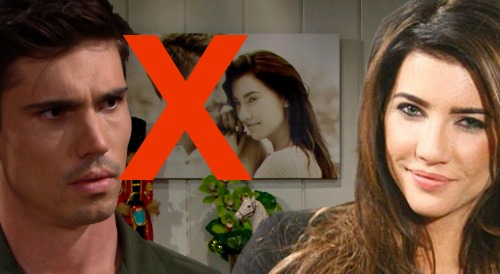 The Bold and the Beautiful (B&B) spoilers tease that John “Finn” Finnegan (Tanner Novlan) will have a lot on his mind this coming week. As B&B viewers know, Finn seems to have fallen hard for Steffy Forrester (Jacqueline MacInnes Wood), and he made it abundantly clear to her and to Liam Spencer (Scott Clifton) that he’s not going anywhere.

Steffy seemed to beam when Finn stood up to Liam at the cliff house, and it seems that she’ll have a lot more to smile about where Finn is concerned during the week of October 19.

According to B&B spoilers, Finn will promise to love and care for Steffy in the way that she deserves. That’s right, Finn is apparently going to use the word “love” when it comes to Steffy! I

t might be a bit early for Steffy and Finn to exchange definitive declarations of love, but Finn might say that he’s growing to love Steffy and that he’ll strive to love and care for her.

It should be a sweet sentiment, and given how Steffy responds to Finn on a regular basis, it probably won’t take her too much by surprise.

Well, given that things are moving right along with Finn and Steffy, one wonders just how long Steffy is going to want to keep that portrait of herself and Liam up in the living room of her home.

We couldn’t help but notice that Finn was staring down the picture the other day, and it must feel weird to him to have a huge photo of Steffy and Liam when they were happy and in love facing him every time he visits Steffy.

We suspect that the time is coming very soon for Steffy to remove that picture, and chances are, she’ll come to the realization on her own that it’s the right thing to do.

It doesn’t seem like it would be a “Finn” move to try to press Steffy into taking down the photo, just like he hasn’t been pressuring Steffy to rush their relationship in any way.

Finn knows that Steffy is fresh out of rehab and that she needs to do things at her own pace, in her own way.

Finn also knows that Steffy has suffered a lot due to her on-again, off-again relationship with Liam over the years.

Part of Steffy’s pain that led to her becoming addicted to opioids was not physical at all, but it was emotional and the result of losing her dream of having a family with Liam.

Taking down that portrait will mean A LOT to Steffy, and it will be symbolic of her leaving her old life and dreams behind and moving forward with new dreams…and with Finn.

We’ll see exactly what transpires from here, but we suspect that at some point soon, Steffy will make the decision to remove the “Steam” portrait, as part of her recovery.

Now, whether Steffy asks Finn to assist her with that remains to be seen. In some ways, it would be fitting for Steffy to do it on her own, but in other ways it would make sense for Finn to help her let go of the past.

At any rate, the countdown to the portrait coming down is on! Do you think Steffy and Finn will take the portrait down together? Stay tuned to B&B and don’t forget to keep CDL bookmarked so you don’t miss any of the latest Bold and the Beautiful spoilers or news. We’ve got you covered!