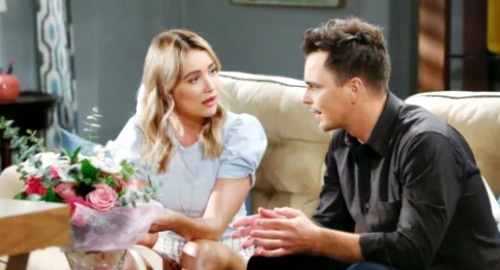 The Bold and the Beautiful spoilers document that Flo Fulton (Katrina Bowden) and Wyatt Spencer’s (Darin Brooks) bliss was bumped by Quinn Fuller Forrester’s (Rena Sofer) arrival in their home. As viewers recall, Flo made that offer while Wyatt’s face was contorted.

Now, as Quinn deepens her battle with Shauna Fulton (Denise Richards), Flo and Wyatt’s recently restored relationship will be impacted. Fans of this couple might start to worry, as Wyatt and Flo will try to avoid being fully drawn into a Queric based skirmish.

Bold And The Beautiful Spoilers – Sally Spectra Is In Genoa City

The greatest threat to Flo and Wyatt being together was Sally Spectra (Courtney Hope). While Wyatt didn’t love Sally, Hope’s character acted with deep desperation in attempting to revive Wally.

The above never happened, Sally’s faked terminal condition was exposed and then her kidnapping scheme was revealed. Wyatt will likely never trust Sally again after learning all that she did, which included Flo’s abduction.

Sally departure from Los Angeles, California, and recent arrival in Genoa City, Wisconsin, on The Young and the Restless meant that she took Wyatt’s advice and left town. With that he and Flo should have been heading toward the altar. Instead, they find themselves in the middle of the mother’s bitter argument.

Bold And The Beautiful Spoilers – Shauna Fulton Right To Be Upset

Shauna wanted to be honest with Ridge Forrester (Thorsten Kaye) and she was until Quinn’s advice prove overly alluring. Richards’ character should have never allowed Quinn to convince her to force the end of Bridge.

Eric Forrester (John McCook) has convinced himself that Quinn took advantage of Shauna’s feelings for Ridge. He thinks that Quinn manipulated Shauna into acting as she did. That take isn’t balanced, as his wife behaved badly, but she isn’t totally at fault.

However, Shauna has a right to be upset with Quinn. Without this longtime friend sticking both of her hands directly into her life she likely never would have chosen to pursue the path that she did. As a result Ridge is no longer her friend, which has proved devastating because Shauna still loves him.

Quinn marks herself far down the list of those who are responsible for all the family trouble that came to pass. She cites Brooke Logan Forrester’s (Katherine Kelly Lang) presence on the earth as the reason why Bridge needed to end. Quinn also pushed the belief that Shauna was Ridge’s better pairing as part of a plan to force Brooke out of the Forrester family.

Now, Flo is vulnerable. She could surely become Quinn’s next target, if there is any pushback in defense of Shauna. That’s the spark that can create Quinn inspired trouble between between Wyatt and Flo.