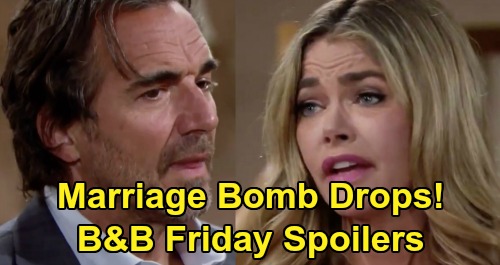 The Bold and the Beautiful spoilers for Friday, August 7, tease that Ridge Forrester (Thorsten Kaye) is going to have a big day. As B&B viewers know, Ridge and Brooke Forrester (Katherine Kelly Lang) just had a long talk in the Forrester CEO office, during which Ridge told Brooke that he wants to be with her more than anything. Ridge and Brooke then embraced happily and appeared to leave the past behind as they reunited.

Of course, B&B viewers also know that Brooke was on her way to go see Bridget Forrester (Ashley Jones) for a few days. We’ll see if Brooke actually leaves for that trip, but B&B spoilers indicate that Brooke may end up surprising Ridge by showing up in his bed later.

Whatever the case, it looks like Ridge will be in for a big surprise before that happens, when he meets up with Shauna Fulton (Denise Richards).

Ridge has been gradually flashing back to some things that happened when he was with Shauna in Las Vegas, after he and Shauna went out for a night on the town.

So far, Ridge’s memories have been fairly sketchy, although he did quickly flash back to kissing Shauna outside of a wedding chapel. Still, it doesn’t seem that Ridge has figured out what it all means, but that will certainly change on Friday’s episode of B&B.

According to B&B spoilers, Shauna will end up at the Forrester mansion and she’ll talk with Ridge. Through their conversation, it looks like Shauna will inquire about what Ridge remembers of his special “VIP” evening with her on the Vegas strip.

Ridge will probably respond that his memories are fuzzy, but that he’s been having flashbacks of their time together, including them kissing and being out on the town.

Well, that’s when Shauna will drop a bomb on Ridge – that they got married when they were in Vegas! Shauna will muse that Ridge doesn’t remember everything…the wedding chapel…the vows…the officiant.

Ridge will be stunned as Shauna tells him that they went through with a wedding ceremony, and that they’re now married.

Of course, Ridge will probably balk at the possibility of being married to Shauna. After all, as far as Ridge seems to know, he’s still married to Brooke, right?

Well, we suspect that it might come out that Ridge and Brooke’s divorce papers – which were signed and ready to go – somehow got filed before Ridge and Shauna tied the knot in Las Vegas. Now, whether Ridge filed the papers himself and doesn’t remember or whether someone else filed the papers remains to be seen.

It’s always possible that Quinn Forrester (Rena Sofer) could have been in cahoots with Shauna to get those “Bridge” divorce papers filed before Shauna took Ridge out for a quickie wedding.

We’ll see what happens here, but it looks like more than one big reveal could come out on Friday’s all-new episode. Ridge will ultimately be left married to Shauna, and he’ll have some big decisions to make going forward.

It sounds like a lot of B&B drama is heating up for Friday’s episode, so stay tuned! We’ll give you updates as B&B news comes in. Remember, CDL is your go-to place for everything B&B! We’ve got your daily episode recaps, hot spoilers, and current news, so stick with us!