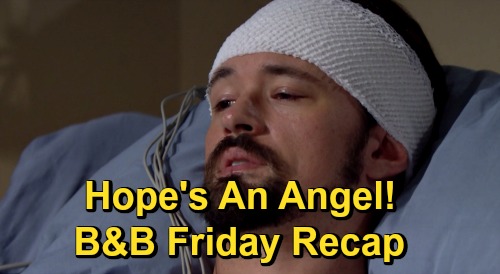 The Bold and the Beautiful spoilers recap for Friday, December 11, reveal that Thomas Forrester (Matthew Atkinson) groggily asked Ridge Forrester (Thorsten Kaye) what happened to him. Ridge told Thomas that he was in the hospital and in good hands.

Thomas asked about Douglas Forrester (Henry Joseph Samiri), and he learned that he had just been through surgery. Ridge said that Thomas was going to be ok, all thanks to Hope Spencer (Annika Noelle), and Thomas gazed at Hope through the window in his room.

Meanwhile, Hope and Liam Spencer (Scott Clifton) were in the waiting area together, and Hope noticed that Liam seemed a little distracted. Hope wondered if Liam was still upset with her about Thomas, but Liam said that he wasn’t upset with her at all.

Hope said that she’d never betray Liam, and Liam looked miserable. Liam said that they needed to talk, and he started in, about to tell Hope about his affair with Steffy Forrester (Jacqueline MacInnes Wood).

Just then, Ridge and Steffy came out of Thomas’ room. Ridge stepped out to call Taylor Hayes (Hunter Tylo) and Hope asked if she could go check on Thomas. Hope went into Thomas’ room, leaving Steffy and Liam alone in the waiting area.

Soon, Ridge returned to the waiting area, and Steffy left to go relieve the nanny. Ridge told Liam that he appreciated him being there, and Liam took off.

In Thomas’ room, Thomas asked Hope how Douglas was doing, and Hope reported that he was fine and that he didn’t know anything about Thomas’ ordeal yet.

Thomas asked about Hope having been with him when he collapsed, and Hope said that she checked on him after John “Finn” Finnegan (Tanner Novlan) was concerned about him.

Thomas thanked Hope, and Thomas wondered if he was ever going to be ok again. Hope said that Thomas was going to be all right, and that he was a fighter and would make a full recovery.

Thomas said that Hope was always there – like an angel looking out for him and Douglas. Thomas then got upset, recalling how he thought the mannequin came alive.

Over at the Forrester mansion, Shauna Fulton (Denise Richards) walked in and greeted Quinn Forrester (Rena Sofer), who was gazing at her portrait on the wall.

Shauna said that she didn’t know where Quinn stood with Eric Forrester (John McCook), but that it was good to see Quinn back in the mansion. Shauna also apologized for accepting Eric’s invitation to move in.

Quinn told Shauna that she knew what Shauna had been saying to Eric about her, and she thanked Shauna for standing up for her and defending her to Eric. Quinn apologized for eavesdropping and said that she really needed to hear Shauna’s words.

Quinn got some champagne, and she shared with Shauna that Eric forgave her and invited her to come home. Shauna and Quinn then made up, and they declared themselves BFFs again.

At the cliff house, Steffy disconnected from a call and told Liam that Kelly Spencer (Colette and Avalon Gray) would be staying the night at a friend’s house. “You were going to tell Hope at the hospital, weren’t you?” Steffy fumed.

“That wasn’t the time or the place to confess.” Steffy and Liam then rehashed details about how Liam saw Thomas kissing the mannequin and jumped to conclusions, as well as how they slept together afterwards.

“It was a misunderstanding – no one can know,” Steffy insisted. Liam said it didn’t work like that, but Steffy grumped that this could be the end of her relationship with Finn, and that Liam’s marriage to Hope would be over if he told the truth.

“Secrets don’t work in a marriage,” Liam said. “Hope needs to know I betrayed our marriage.”

That was a terrific episode of B&B and a great way to round out the week! We’ll give you updates as B&B news comes in throughout the weekend. Stick with the CBS soap and keep CDL at the ready for the latest Bold and the Beautiful spoilers, daily episode recaps, and news.