BY Heather Hughes on February 28, 2020 | Comments: one comment
Related : Soap Opera, Spoiler, Television, The Bold and the Beautiful 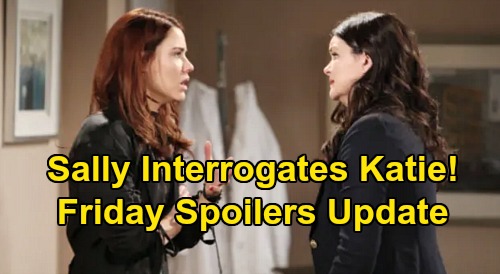 The Bold and the Beautiful (B&B) spoilers update for Friday, February 28, teases that Sally Spectra (Courtney Hope) will have to give Wyatt Spencer (Darin Brooks) an answer. B&B fans know Wyatt’s doing everything he can to make Sally happy in her final weeks. He just insisted he doesn’t want to spend any more time apart and pushed Sally to move back in.

Wyatt’s hoping Sally will agree to spend the rest of her life with him, so all of this is tugging at Sally’s heartstrings. She’s finding a little glimmer of bliss underneath all the heartache. Sally knows she doesn’t have much time left, so she’ll be tempted to throw caution to the wind and just embrace Wyatt’s love. However, Sally will only want to accept that love if it’s coming from a genuine place.

Sally’s luck has turned around in a big way thanks to the latest developments at Forrester Creations and Wyatt’s change of heart. The more Sally thinks about these positive shifts, the more suspicious she’ll become. Sally will realize there’s a possibility Katie Logan (Heather Tom) went against her wishes and blabbed about her terminal illness.

Sally won’t want Wyatt putting everything on hold for her or suggesting that they live together out of pity. Since Sally can’t be sure of Wyatt’s motives, she may tell him she’ll have to mull this over. That could give Sally a chance to grill Katie, which is exactly what she’ll do in Friday’s B&B episode.

Once Sally corners Katie, she’ll want to know if her deadly secret is truly still a secret. Katie won’t want to lie, but it seems she’ll have no choice – at least if she wants to give Sally the final weeks she deserves. It looks like Katie will claim she kept quiet and hope Sally believes all these good things are happening on their own.

Sally may buy that initially, but there’ll be more trouble after Katie slips up on Monday. It should bring another interrogation from suspicious Sally! In the meantime, Flo Fulton (Katrina Bowden) will get an unexpected compliment from an even more surprising source. Bill Spencer (Don Diamont) doesn’t quite hate Flo as much as he used to. After all, Flo did save Katie’s life by giving up a kidney.

Even so, Bill isn’t exactly the president of the Flo fan club. There are still some lingering issues due to the baby swap scheme, but he’ll take another step toward burying those on Friday. The Bold and the Beautiful spoilers, updates and news say Bill will offer Flo praise – presumably for making another great sacrifice.

Bill may be impressed with the way Flo’s putting her own feelings aside for Sally’s sake. He’ll give Flo this compliment when Katie’s on hand, so she should be equally impressed with Bill. Katie should be glad that Bill’s making an effort and showing Flo some kindness for her efforts.