BY Heather Hughes on January 17, 2020 | Comments: one comment
Related : Soap Opera, Spoiler, Television, The Bold and the Beautiful 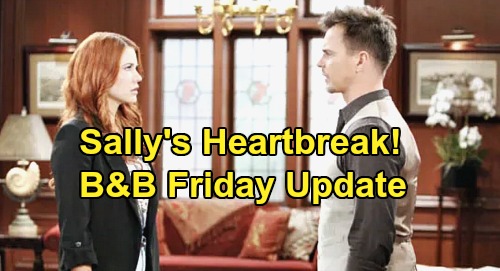 The Bold and the Beautiful (B&B) spoilers update for Friday, January 17, teases that Eric Forrester (John McCook) will walk into a warzone. He’ll face a tough task once he realizes just how out of hand the mansion battle has gotten. Quinn Forrester (Rena Sofer) and Brooke Forrester (Katherine Kelly Lang) are livid with each other, so they’ve declared war and are prepared for anything.

Of course, Shauna Fulton (Denise Richards) is firmly in Quinn’s corner, but Brooke won’t let the two of them think they’ve won. She’ll make it clear that this fight is far from over. The Bold and the Beautiful spoilers say more insults will be tossed around on Friday.

Brooke, Quinn and Shauna will also deliver another round of threats, but Eric will hope to shut all this down.

Eric will think the women need to cool it and try behaving reasonably. That’s impossible when you’re dealing with three vicious, hot-tempered women! Even so, Eric will manage to quell the conflict for now. 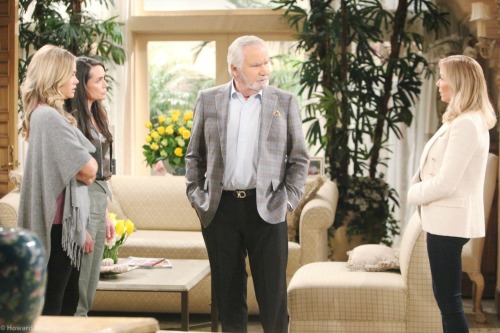 By the time next week rolls around, Eric will determine that it’s best if Shauna moves out. Quinn won’t like the idea of Brooke getting what she wants, so she’ll rev up her efforts to destroy her enemy.

Until then, let’s talk about Wyatt Spencer (Darin Brooks) and his romantic future. B&B fans know Wyatt kissed “Flo” Fulton (Katrina Bowden) and professed his love. He’s ready to end things with Sally Spectra (Courtney Hope) and get his relationship with Flo back on track, but Sally won’t make this easy.

In Friday’s episode, Sally will surprise Wyatt by wearing some steamy lingerie. She’ll think they should have a night filled with passion and hopefully reignite their spark.

The Bold and the Beautiful spoilers say Wyatt will have to turn Sally down. He won’t feel right about leading Sally on any longer when Flo’s the one he wants to be with.

Still, Wyatt cares about Sally and will hate the thought of hurting her. He’ll struggle to pull the trigger on this breakup, especially once he sees how hard Sally’s trying to keep their romance alive.

The Bold and the Beautiful spoilers say Wyatt will eventually have to get this over with. He can’t keep stringing Sally along, so he’ll have to dump her at some point.

Since Sally has an illness that’ll be revealed next week, it’ll be interesting to see Wyatt’s reaction. His heart’s sure to be all over the place in the weeks ahead. We’ll give you updates as other B&B news comes in. Stay tuned to the CBS soap and don’t forget to check CDL often for the latest Bold and the Beautiful spoilers, updates and news.